Karl Erjavec is one lucky sonofabitch. In fact, he is so lucky that his middle name could well be changed from Viktor to Felix. I mean, the lucky with this guy is so strong that if he’d been thrown out of an airlock in the middle of the universe, he’d beat the probability of survival of two to the power of 276,709 to one against. Because that’s how improbable it is that Karl Erjavec found himself at the epicentre of not one, but two political and diplomatic scandals in Slovenia and was told by PM Cerar that he will not seek his replacement. 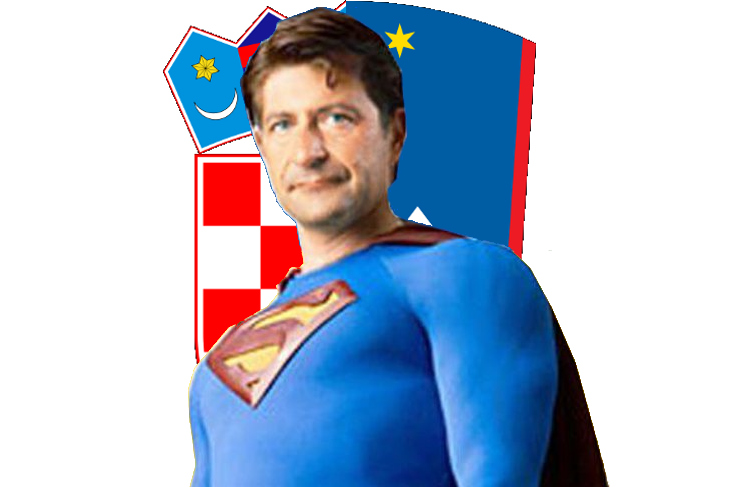 SuperKarl and the Mystery of The Arbitration. Sounds like a film with Harrison Ford

You see, if this was a time like any other, Erjavec would be flying out of the ministry, legs first, over a scandal with Slovenian ambassador to France where she allegedly embezzled state funds, repeatedly went on unauthorised leaves and fabricated reports. Shit was apparently brewing for some time, while the wrongdoing was uncovered months ago by an internal audit results of which were then sat on by the foreign ministry. The report was released only yesterday after the Information Commissioner ordered the ministry to do so, following an apparently unusually long deliberation on the issue.

However, since Slovenia is momentarily embroiled in the Arbitration Agreement omnishambles which already claimed the two directly involved senior diplomats, PM Miro Cerar apparently decided against beheading the foreign ministry in what is shaping to be a crucial, all-hands-on-deck period in the arbitration on the Slovenia-Croatia border dispute.  Not to mention the quite probable outbreak of a political crisis in Slovenia dismissing the leader of the second largest coalition party would probably incur. Thus SuperKarl lives to see another day.

Namely, after the initial panicky response to what is now dubbed PiranLeaks, Slovenian political class is finally getting its shit together. Thus a new national arbiter will be appointed soonest (probably today), circumventing the usually protracted process in the parliament, in the hope that the arbitration proceedings can continue and ultimately conclude. Which is precisely what Croatia wants to prevent.

The government of Zoran Milanović went into rapid-fire mode, upping the ante almost daily. Thus on Sunday FM Vesna Pusić was still writing a concerned letter to the Arbitration Tribunal, formally notifying it of what had happened, but on Monday PM Milanović already announced the government is considering withdrawing from the arbitration altogether. And when his Slovenian counterpart Cerar said neither country can quit the arbitration (as per agreement), Milanović retorted by saying that it can and it will.

This is the point where things start to get tricky indeed. For all its bravado (probably amplified by the de facto election campaign Croatia is in), the incumbent Croatian government has talked itself into a rather cramped corner. Not putting their money where their mouth is would mean certain ruin for Milanović and his fellow political travellers. But the signals they are receiving are anything but clear and/or encouraging. Namely, the European Commission stated in no unclear terms that it expects the rules of the agreement to be adhered to and for the tribunal to finish the job at hand. The tribunal itself demanded Slovenia explain its version of events. Whether or not this heralds a chastising of Slovenia or not remains to be seen, but it does suggest the tribunal sees itself fit to handle the current clusterfuck as well.

Point being that Croatia used up most of its ammo (provided there’s not another batch of phone-taps waiting to miraculously appear in Croatian media) while everyone else barely made a move. This, too, suggest the pace of Croatian moves is dictated by internal political dynamics (looming elections) rather than the arbitration itself. And while one can fully expect attempts at broadening the field (like Zagreb filing a complaint with the Int’l Maritime Tribunal in Hamburg), the fact is that the Arbitration Tribunal has it within its power to conclude the proceedings as per the agreement. Even if that means unilaterally appointing a new arbiter for Croatia, since Vukas is rumoured to be stepping down at the behest of the government in Zagreb which will not name a replacement, or so the wisdom goes.

Unless, of course, Slovenia has a trick or two up its sleeve, as well. That, at least, that was the translation of Branko Grims’ cryptic praise of SOVA, the Slovenian spook service yesterday. Namely, Gizmo (generally, a pretty undesirable character) said the country’s intelligence services had done an excellent job which led to speculations that Slovenia, too, had been listening in on Croatian convos (link in Slovenian).

If that really is the case, one can only hope no one is stupid enough to actually release the recordings. We’ve seen enough embarrassment these days to go around. Twice over.

UPDATE
This, via the STA