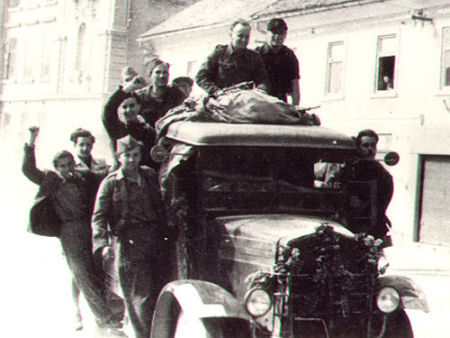 On May 9, 1945 Ljubljana was liberated by Slovene Partisan Forces. In celebration of this there is an annual event “Po poteh spominov in tovarištva” – basically a hike around Ljubljana, more or less where barbed wire was installed by the Italian occupator. I go on this hike every year and am planning to go this year as well. And I have a question.

Would anyone else like to go to? I’m planning on doing some “live blogging” as I installed a nice little plugin for posting via mobile phone, or I may even take my laptop, camcoder and wireless card and do some video-blogging.

This is just an initial “sounding of the terrain” and I’m not confirming a mass event just yet. But if there’s enough of you who’d like to partake in this celebration of liberty and Partisan music, we can have a lot of fun.

It’s an approximately 6-7 hour hike, mostly flat terrain (just one hill to overcome) and it takes place on Saturday, May 12th. Unless I fall ill, I’ll do it regardless of the weather. 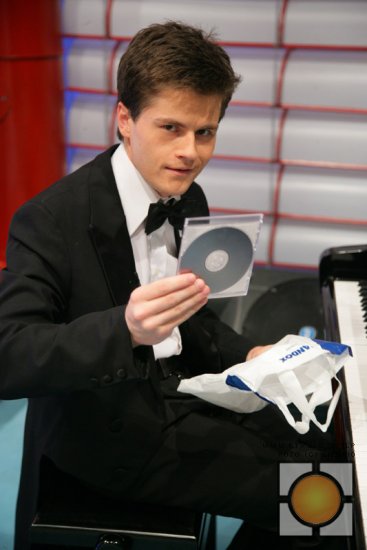 
The (in)famous Jure Godler has joined the ranks of bloggers. To be more exact: he will officially start blogging on Saturday, but you can already get a sneak preview now…

Just a couple of days ago Jure Godler won a Viktor (Slovene Oscar-wannabe) for a “rising media personality”, but the list of his artistic and media exploits is long and distinguished. And most of all, he’s got class.


Hats off to you, professor Godler! 😀 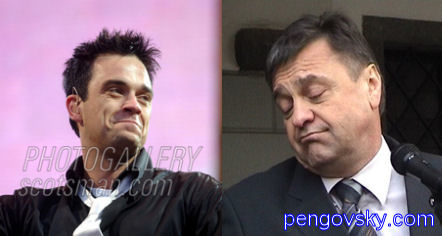 
A man opposing the reconstruction of Ljubljana Central market tears up slogans of supporters of the renovation.


A rally against the renovation of Ljubljana Central Market took place yesterday afternoon. At the same time a group of supporters of renovation staged their own rally, much to annoyance of (mostly elderly) people who fervently opposed Mayor Janković’s plan to build a parking lot below the Central Market, claiming that the nearby Castle hill would be a much more appropriate location.

And while the anti-parking lot rally cursed mayor Janković (a piece i did for The Firm™ is available here), sending him “back to Serbia” and accusing him of lining his own pockets, it once again became clear that those, who value the Central European (that is Austrian) moral, architectual, social, policital and cultural status quo, are actually more brutal and savage than any of the trully Balkan savage tribes.


I understand that over there they have a long tradition of picketing. But this form of democracy is way too much for this sorry country. You know: you can take a man out of the Balkans, but can never take the Balkans out of a man.


Once again – shit is brewing… 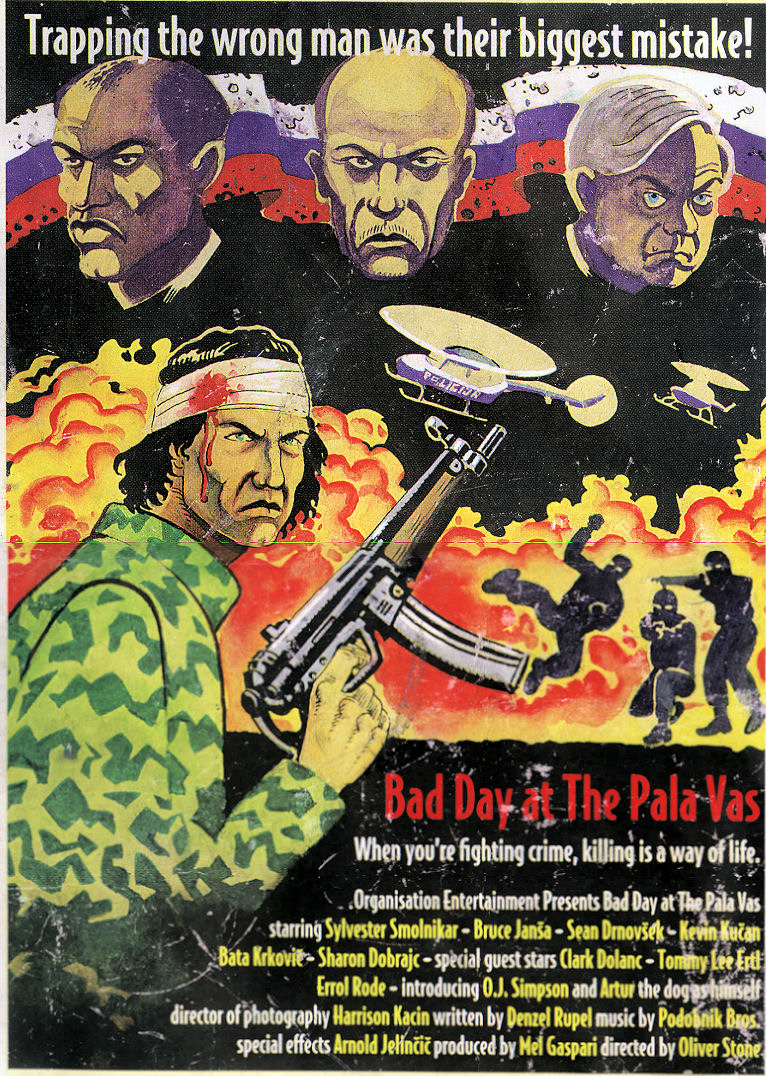 
The other day I was raving about unexplained high-level break-ins and also promised lisa to post something on some rather freaky events in this country’s short history. Namely, I submit to you that we’ve witnessed two attempted coup d’etats in this country.


————————–
DISCLAIMER (yes, this is so sensitive that I have to write a disclaimer first):
The subject is highly volitaile and involves a number of high-level officials, some of whom are still in office. At least one of the two events described below is still subject to a heated debate, both in terms of the actual chain of events as the reasons behind it. It is also considered a turning point for Slovene democracy by some, while brushed aside as just another dirty ploy by others. The views expressed here are my own. I will supply as much backgroud information as possible but not at the expence of making a point. I will also provide the logic of my line of thought, which is admittedly based on some (in my opinion) sound general principles, rather than a particular decision of what is right and what is wrong.
————————–


One of the reasons Slovenia increasingly sought its future outside Yugoslavia in late 80s was the fact that Yugoslav Army, although federal in name, was a centralised institution unto itself, accountable to noone. The Army was not to be questioned, its position not undermined or otherwise diminished – quite the opposite. With the death of Josip Broz Tito, the Yugoslav Army considered itself the only true interpreter of Tito’s legacy. This clashed heavily with the (con)feredalist nature of Yugoslavia at the time when the six republics were increasingly growing apart and drove especially Slovenes to frown upon the Yugoslav Army.

The last straw to have broken the camel’s back was the JBTZ scandal, which propelled Janez Janša to forefront as one of the symbols of Slovenes yearning (and only three years later fighting) for independence. While Janša represented the New Order, Milan Kučan represented continuity and a guarantee that the break will be as painless as possible. At the time Kučan was the president of the Central Committee of the Leauge of Communists of Slovenia – basically one of the top dogs of the period, although not the only one. Janša goes on the become the archetipical anti-communist post-cold-war politician and was named Minister of defence in 1990, when the first multi-party elections were held in Slovenia. On that same election Kučan was elected president by a popular vote and the two men were forced to work together if independence was to be achieved.


Fast forward to 1994. Defence Minister Janez Janša is at the height of his power, his aureola as the winner of the war of independence elevating him at least to a status of a lesser-diety in the eyes of many. He and his trusted aides go about creating a proper Slovene Army, with a special operations unit at its core. The members of this unit were creme de la creme of Slovene armed forces, with the best equipement and the best training. The problem of course was that they were much more loyal to their creator – Janez Janša and his close aides, than to their Commander-in-Chief – President of the Republic of Slovenia, Milan Kučan.

With a special operations unit at one side and army inteligence on the other side, Janša was increasingly holding power vastly disproportionate to his ministerial post. Although formally accountable to the parliament, he was untouchable and considered on a par with Kučan, both in terms of political power and popularity. The army (his army) was becoming an institution unto itself and considered itself (with Janša at its helm) as the only true interpreter of Slovenian statehood. Janša and Slovenian army were – in a nutshell – getting out of control. It was a perfect setting for an inter-agency showdown, as the civilian secret service planted an agent within the military secret service. His cover was blown and military inteligence fed him forged documents which claimed that a coup d’etat was being prepaired by a clique within the Ministry of Defence.

The trick of course is that a coup d’etat was indeed being prepaired should civilian authorities panic and wanted to arrest or detain the main players. Live ammunition was being handed out to trusted military personel, troops were being flown to outskirts of Ljubljana and several garrisons were put on alert. It was a plan – just not the plan outlined in the forged documents. Why forged documents? Janša was hoping that civilian authorities – led by Milan Kučan – would cry “wolf!”, upon which he (Janša) could prove that the documents were forged, expose the agent and humiliate Kučan, who would probably have to resing his post, putting Janša and Slovene army beyond actual control by any instutition whatsoever.

It was in fact a question of who controls the armed forces – does the task fall to the civilian authorities (the parliament and the President), or is the Army accountable only to itself. Given the Wikipedia definition, the above is a text-book definition of a coup d’etat.


After Janša was ousted as defence minister following “Depala vas” affair, he came up with a ploy after a ploy on how to gain power. He and his party proposed a referendum on changes of the voting system in 1996. At the time Slovenia sported a heavily proportional electoral system, whereas Janša proposed a majoritarian system, the idea being that he’d cut himself a shortcut to parliamentary victory as the voting districts would have to be entirely redrawn and possibly quite gerrymandered in his favour.

The referendum failed, also because Janša’s opponents formed two counter-proposals, and for the first time Slovenia held a three-question referendum. To have been adopted, the proposal must have achieved an absolute majority of the votes cast. Not impossible, but highly improbable with as the votes split three ways instead of the usual two. Of course his attempt failed and Janša cried foul and had in my opinion – once for a change – every reason to do so. But that is somewat beside the point…

Fast forward to spring of 2000. The government of Janez Drnovšek colapses, as the centre-right SLS withdraws its support. The party forms a coalition with Janša’s SDS and little known Andrej Bajuk is appointed Prime Minister of Slovenia. Almost instantly the Constitutional court – against all odds – rules that the results of the ’96 referendum were misinterpreted and declares that the majoritarian system won, although it got only 44 percent of the vote.

The Government of Andrej Bajuk (with Janša as Defence minister again) swiftly declares that a new law must be passed immediately, as the decision of the constitutional court voided the validity of the current electoral system and if none is passed to replace it, elections will have to be postponed (while every pre-law student know that old law is valid until a new one is passed, unless the old one is repealed by the parliament)

Postponing elections – a classic attempt at a coup d’etat. First it’s just for a couple of weeks, then months, then a year and soon you don’t need elections anymore, for you have a perpetual government, wihch always knows what is best for its people.

Luckily, the same SLS which so uwisely brought down Drnovšek had enough wisdom to see what was going on (mostly that they would lose parliamentary seats with the new system) and started working hard towards amending the Constitution of Slovenia with electoral system becoming a part of the constitution, thus superceeding any decision taken on a referendum.


Well, there you have it. It may seem nothing, but I think that civilian control over armed forces and regular elections are pillars of a stable democracy. If either of the two is not there, the country becomes a Banana republic. It almost happened twice in Slovenia. And Janša was there on both occasions. That is why the recent unexplained thefts make me extremely nervous. It is possible that there is some shit brewing?