Yesterday a year passed since Janez Drnovšek passed away. The good doctor has a beautiful post on this, where she also touches the other hot topic of this week – the Erased. Specifically, she has a lot to say about Mlada Slovenija, the youth organisation of Nova Slovenija. 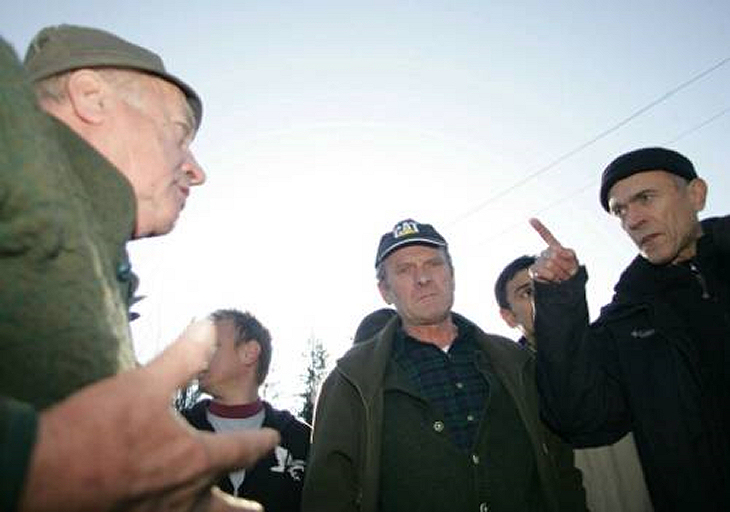 A memory-jogging exercise: Nova Slovenija (NSi) was one of the junior partners in the Janez Janša‘s goverment. It held various portfolios, finance and justice being the two most important for today’s post. Nova Slovenija was wiped off the electoral map in last year’s elections. It didn’t even make it past the 4 percent threshold. There are numerous reasons for that, but the bottom line is that the party which only four months ago was the second most powerful party in the coalition has now joined the ranks of Party of Slovene Nation, National Labour Party, Lipa, The Republicans (go figure), The Communist Party, Clean Drinking Water List and many other parties which linger at the outer limits of Slovene political arena.

This might go some way in explaining why the youth organisation of Nova Slovenija (self-described as Christian People’s Party) issued a statement saying that “instead of being given to the Erased, money should be transfered to students who need it more” (Slovene only). Also, it helps to know that ministry of the interior today started issuing decisions to some of the Erased, legalising their status as legal aliens with permanent residence in Slovenia since February 1992.

NSi of course is not the only political party to go apeshit. Had it not been for some other factors (given below), their rant would go almost unnoticed, especially since SDS the largest opposition party (or, some would say, coalition party), filed an interpellation (a bill of impeachment, for those of you in the US) against interior minister Katarina Kresal. The fact that SDS did it on the same day as decision started being issued proves that they were planing ahead (unlike some people…. I’m looking at you, Borut!). However, not to be outdone, KK already issued a rebuttal. And – adding insult to injury – she did it on Facebook, one of the many tools of 21st century SDS still has to master.

Basically, SDS and NSi are saying that decisions are laying a foundation for the Erased to claim massive damages from the state, thus endangering the state of public finances.. Aside from the interpellation, SDS again proved it does understand parliamentary rules and procedures and filed a constitutional law (basically, a change of the constitution), which would prevent the Erased from claiming back-pay for the time their status was unlawfully revoked.

Holy shit! Not even pengovsky is capable of such cynicism! Claiming that someone should not be able to sue the state because the coffers are empty is nothing less than a complete denial of the rule of law. What are we doing here? Saying that you can only sue the state if you are bound to lose? What’s next? Opposition saying that noone should get their overpaid taxes returned because it would endanger public finances?

Guys, I realise you’re the opposition now and that with this PM you can get away with pretty much anything, but… really? Have you no decency? Have you really fallen that low? I mean, curbing basic human rights in the name of economic crisis is just bad sport. It shows you lack both the courage and the intelligence to come up with a persuasive argument against settling the Erased problem, which has been imposed upon more than 25.000 people seventeen years ago!

But this shouldn’t come as a surprise. The political right has ridden the wave of hatred, nationalism and ethnic superiority for quite some time now. in 2006 this exploded in anti-Roma riots in village Ambrus, where Janša’s government succumbed to the mob and evicted a Roma family because the Slovenian majority didn’t want them there any more, although the Roma owned the land. There was pitchforks, riot police, bonfires and the whole shebang.

The Erased are only a big piece of an even bigger mosaic of paranoid nationalism. Rumours have it that a large anti-Muslim gathering is being organised to protest the construction of Ljubljana mosque. And then people ask how come a group of football hooligans with a deficiency in basic reasoning and a strong anti-Croatian sentiment can hold entire NATO by the balls.

On Christmas Day 2006 the late President Janez Drnovšek tried to help the then almost-evicted Roma family by delivering food, clothes and shelter. Regardless of his position and without a shred of respect or decency he was stopped by a mob of local villagers, who forbade him (him, the commander-in-chief!) to deliver the relief material, because they decided that the Roma family, freezing near the burnt remains of their house, doesn’t need the help and would leave soon if denied it.

President Drnovšek took on the mob (video, Slovene only), telling them that although they call themselves Christian, they don’t have a shred of Christianity in them because they would rather leave women and children freeze and starve than help them. Slightly more than two years later, NSi is calling for another group of second-class citizens to be denied their basic human rights. Seems like NSi as well is Christian only in name and not in the spirit.

Apparently, a lot of people learned nothing from President Drnovšek. May whichever god they believe in have mercy on their souls. I, for one, have none left.

39 thoughts on “Have We Learned Nothing?”