Earlier today Zoran Janković announced his entry into the mayoral by-election race. Although pushed back until three hours until deadline, the move was widely expected and subject to much speculation ever since the leader of Positive Slovenia failed in his PM bid in mid-January. In terms of the race itself, with Jay-Z in the picture, the end result is – barring a catastrophic turn of events – almost a given, especially since some initial polling data shows he’d win as much as 70 percent of the vote. But still, there are slightly more than three weeks to election Sunday, and things can happen. The rest of the candidates will surely put up at least a decent fight and even if Janković looks poised to win from the outset, the mere fact that there are seven candidates in what for all intents and purposes is a tedious formality, shows that the Slovene politics is as lively as ever, both on the left and on the right. 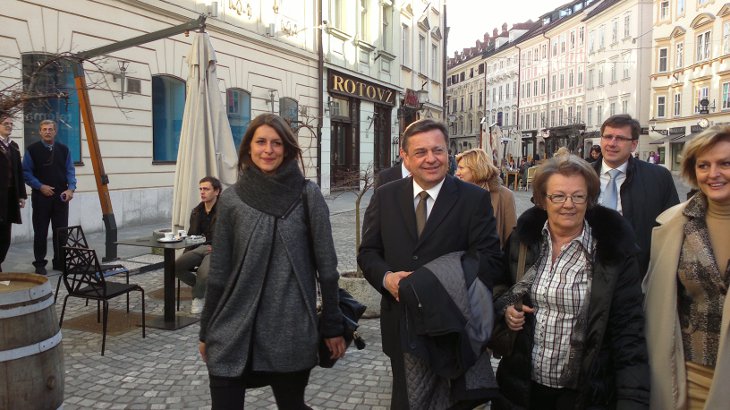 Namely: the mayor is elected by popular vote and has a vast scope of powers, but being a member of the City Council is not one of them. Actually, the composition of the Ljubljana city council will remain exactly the same, no matter the result on 25 March (by-election day), meaning that Zoran Janković List (LZJ – Zoki’s candidate list, which formed the basis for Positive Slovenia) will retain the absolute majority of 25 out of 45 votes. And you can imagine the slaughterhouse that would ensue if any other candidate but Zoki won. However, this did not prevent six other candidates to join in on the fun.

Zares party, formerly of Gregor Golobič, but until recently under new management of Pavle Gantar, put up their candidate, former MP Vito Rožej. While he has practically zero chance of winning the race, his bid shows that Zares refuses to die (to the utmost irritation of many) and that the party will try to rally whatever resources it has left on the local level to attempt re-entry into the parliament in 2015 or even sooner. Some say that their tactic is suicidal and that they’d be better off skipping this one. But the truth is that Zares needs all the attention it can get, both to promote their political platform which is just enough off the prevalent neo-liberal spectre to be ignored more often than not, as well as to make their rank-and-file (what’s left of it) feel worth their while. Also, one needs to keep fighting, even if it means landing only a few soft punches at first.

Things are even more interesting with the Social Democrats. They opted not to put forward their candidate and also refused to support Janković or any other candidate. In fact, they’re sitting this one out. Which is all fine and dandy, except for the fact that they were the principal recipients of a general political whoop-ass in the parliamentary elections, being reduced to only 10 MPs (down from 29) in what was one of the biggest electoral routs this country has ever seen. And yet, they still apparently feel that all would a-ok had Jay-Z chosen not to dabble in national politics. Thus, they’re refusing to back Janković, mostly courtesy of party president and former PM Borut Pahor, although it needs to be said that precious little love is lost between Zoki and Ljubljana SD president Metka Tekavčič.

LDS is nowhere to be seen, but even so it is clear that the left if in a state of flux and one should not forget that virtually anything can happen.

On the other hand (literally) things are much more “heh heh”. SDS of Janez Janša were their usual secretive self about their plans for these by-elections, but in the end they chose to not to lose yet again. Or, at the very least, not to do it on their own. Which is why they supported Mojca Kucler Dolinar of Christian Democratic Nova Slovenija (NSi) who ran against Janković in the 2010 local elections as well. Funny thing is, however, that the initial nudge for Kucler Dolinar to hop on the bandwagon apparently did not come from her own NSi, but rather from the SDS. Which is a bit weird and suggest at least some level of horse-trading. It could be (and this is pure speculation) that Kucler Dolinar agreed to take one for the team with a reward waiting down the road. After all, this is a right-wing government we have here and NSi is a coalition member.

On the other hand, the SLS of Radovan Žerjav went solo with their candidate Matjaž Glavan. Funnily enough, when asked about the reasons for solo venture, Glavan said that “SLS is a moderate centrist party”, thus implying that NSi and SDS are neither moderate not centrist. Apparently, there’s also some level of resentment, as Ljubljana SLS leadership apparently was not consulted on Kucler Dolinar bid and was – it seems – taken for granted to have been on board with NSi and SDS. Rather arrognat of them, n’est-ce pas?

Three other candidates remaining candidates are from the “Usual Suspects” category. While Miha Jazbinšek of the Green party is a veteran of Slovene politics, he too is in it mostly for the exposure, while Jože Drnovšek and Jožef Jarh can safely be put under “wtf”. For example, Drnovšek got an incredible 212 votes in the last local elections.

So, does this constitute Janković’s retreat from national politics? Yes and no. On one hand there is the high-brow “go back to where you came from” moment, emanated by most of the players in the parliamentary arena, which always saw Janković as somehow inferior to them. However, this may well prove to be his saving grace, as he has long maintained that he doesn’t feel comfortable in legislature. Also, being the nominal leader of the opposition is not as glamorous as it sounds, as one can do very little save bitch about everything. Also, it needs to be said that with Zoki out of Ljubljana, things rapidly began to disintegrate and dissent was spreading fast within the usually rock-solid ranks of Janković’s councilmen. So, coming back could also mean tying a few loose ends. From Janković’s viewpoint this a win-win combination, with the added bonus of him being dislodged from the parliamentary cesspool and being able to wait while Janša breaks his back over handling the crisis and then step back into the ring with an I-told-you-so attitude and – this is the fun part – again coming back to haunt Janez Janša, just as he thought he had gotten rid of Janković once and for all.