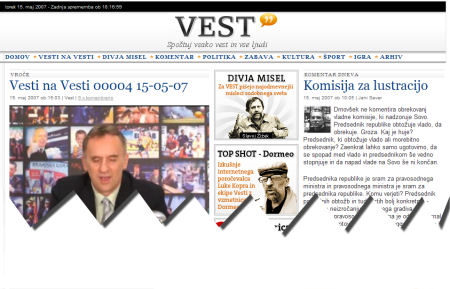 
Just saw “Vesti na Vesti” for the first time over at vest.si (in Slovenian only). And – contrary to most comentators there – I find several things quite disturbing:


For the uninitiated: Vest.si is a media portal/blog set up by Jani Sever and a couple of his more or less well known associates. Sever was forced out as the editor-in-chief of a left-wing Mladina weekly political magazine last summer after a relentless political pressure. According to my information the right-wing government has instructed state-owned companies to stop advertising with Mladina, which led to a sharp drop in magazine’s income as these companies are the largest adverisers in Slovenia. In any event, Jani Sever was removed and then embarked on setting up an independent web-based media, which turned out to be vest.si.


The portal/blog has recently been overhauled and is now featuring a weekly round-up of events, hosted by perhaps the only true media celebrity in Slovenia, Jonas Žnidaršič (also known as the host of Who Wants to be a Millionare). So far, so good and I bow to Sever and his team for keeping the project alive.


But I’ve got several problems with this particular concept of weekly round-up, most notable of which is of course the “infotainment” approach.

I do not dare to object to the content at vest.si (mostly because it is above average, but also because I’m not forced to check it out anyway, so I do it out of my own free will), but I do take issue with mixing what turns out to be a wannabe-sarcastic video-collage with the rest of the content.

Jonas does an excellent job as a presenter. He should. It is just that in my oppinon his trademark sarcasm and cinycism do not mix with the serious nature of the actual news. Vest.si team is great at fishing out embarassing moments of current government, but Jonas’ commentary makes a mockery of what should be serious issues. The paradox that occurs is that it is his appearance in the make-shift studio that makes the round-up watchable, much less the actual content.

Of course the main question is, what this round-up actually is. Is it serious, offering the user the benefit of expanded knowledge, is it – in short – news? Or is it a mockery and a parody, a Slovenian version of the Daily Show/Colbert Report with a twist and a knack for using swear words?


If the latter is the case, then I think that Editor in Chief shouldn’t publish his editorials in the round-up, because they either lose credibility or give undeserved credibility to the show. It is like pouring vodka and whiskey in one glass. Some things just shouldn’t be done.

However, If the round-up is considered news, then I’m sorry to say that it fails the most basic journalistic test: relevance. Namely: what is the point of having a news round-up when all news is published in full anyhow? The video is too long to watch as one can check out a good portion (if not all) of the latest entries on vest.si within those ten minutes and decide for oneself on the relevance of a particular piece of news.

Truth be said, there is some progress. In the latest edition Jonas refrained from using swear words. A big plus. But there is still a long way to go. And I don’t think that the content of vest.si would be any less interesting if it hadn’t been for this round-up. I’ve no illusions about this. I’m positive that the round-up with Jonas will be one of the more accessed and viewed features on vest.si. I just think it’s a bad idea.


But what on Earth am I saying??? Here I am bitching about it, when I’m reguralrely posting naked chicks and guys and swearing al the time, while trying to project an image of a left-wing intelectual. I guess the only difference is that I do it for kicks, whereas vest.si is said to be a true and independent media. I’d hate to see their reputation tarnished because of a small screw-up.


UPDATE: Today’s (Wednesday) edition was much more to my liking – both in terms of what was said in the post and in the comments, as well as pleasing my own taste for content.

21 thoughts on “Some Things Just Shouldn’t Be Done”