After Social Democrats, Zares and LDS (aka The Trio) won Sunday last, Ljubljana mayor Zoran Janković called upon people of Ljubljana on live TV to join in on the celebration. Indeed, some two thousand people came, a makeshift stage was quickly set up, lightning and sound organised and when leaders of The Trio came to the stage the crowd went positively wild. 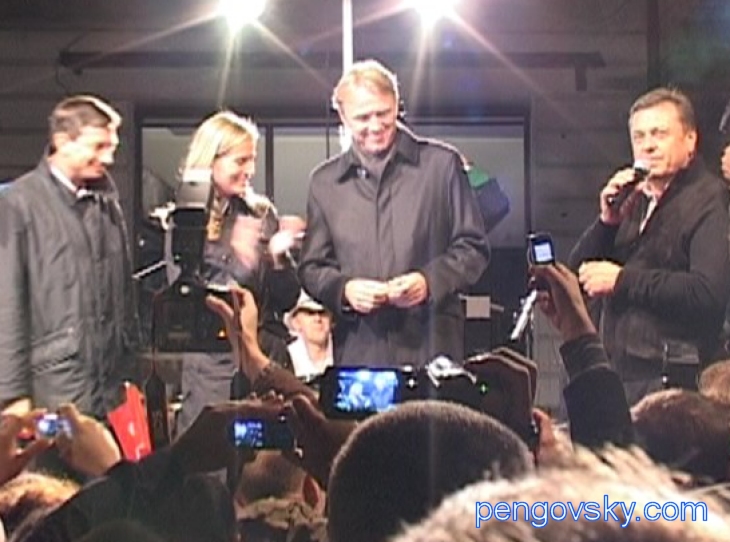 Days later, however, questions were raised as to who exactly organised the event, and we witnessed one of those rare moments when the mayor was caught completely off guard. When asked about it on a press conference, he feigned ignorance, saying that it was the Social Democrats who applied for an extended permission to organise the event (which included a small stage, plus sound and light systems). He specifically said that the city of Ljubljana was not the organiser and had nothing to do with it. When pressed over it, mayor Janković said that he was told about the event beforehand and had given his consent, but refused to name names, adding that he was told about the application by SD only a day later and that it was a spontaneous gatherhing (which, presumably just happened to include a stage and a band). Since the event would have to be registered with the police, but was not, the organiser was in violation of Law on public gatherings and events (or something like that) and faced a fine of up to 800 euros.

So many were mildly suprised when a press release was issued later that Tuesday, in which company GSA stated that it was the true organiser of the event, which was “a present to the victorious political party”. GSA is a company owned by one of Slovenia’s top enterpreneurs Joc Pečečnik, who made it big in the casino business builiding roulette machines and other gambling accessories, but who also owns one of Ljubljana’s footbal clubs Interblock and is the majority stakeholder in the project of renovating the existin Ljubljana stadium. Pečečnik was indeed seen at the SD HQ on election night, but his business ties to the city of Ljubljana under mayor Jankovič are also undeniable.

So, what’s the big deal? To be honest, there isn’t any. There is, however, the small matter of someone throwing a public party without registering it – and that’s illegal. And since the party was both spontaneous as well as organised, it had mayor Jankovič’s fingerprints all over it (he is known to have thing done practically in an instant), not in the least because of his public appeal. And when he denied his involvement, he didn’t do a very good job. And when GSA came to the rescue it looked more like an attempt at damage control than anything else.

So, did mayor Janković lie? In hindsight, probaby not. Did he make a full disclosure? Again, probably not. Did he handle the situation badly? By all means. He could have either said that it was he personally who organised the party (not the city), take the blame, pay the fine and get it over with. Alternatevly, he could say that he was only told about the party, did not know who organised it and didn’t ask, because he assumed that it was organised legaly, but only extended the courtesy of making a Janković-stlye public appeal on live TV.

Truth be told, when Janez Janša’s SDS won the elections four years earlier, they closed off an entire block around their HQ, not just a portion of pedestrian zone, and noone said a thing. But neither Janković not The Trio were elected to things like before, but because they promised to do them a lot better. So far, the mayor’s track record is very good and it would be a shame if he started slipping now, when he’s finally got a friendly government in sight. As for The Trio is concerned – they have been probably given their only chance. They better not blow it.