Since Greece and the rest of the Euro zone gave each other the finger the other day, a few things need to be said before things go syrizaously wrong in this neck of the woods. What was expected to be the day of another euro-compromise, brokered in the wee hours of the morning, the whole thing fell apart, seemingly with Greece and its new government on one side and he rest of the Eurozone on the other. 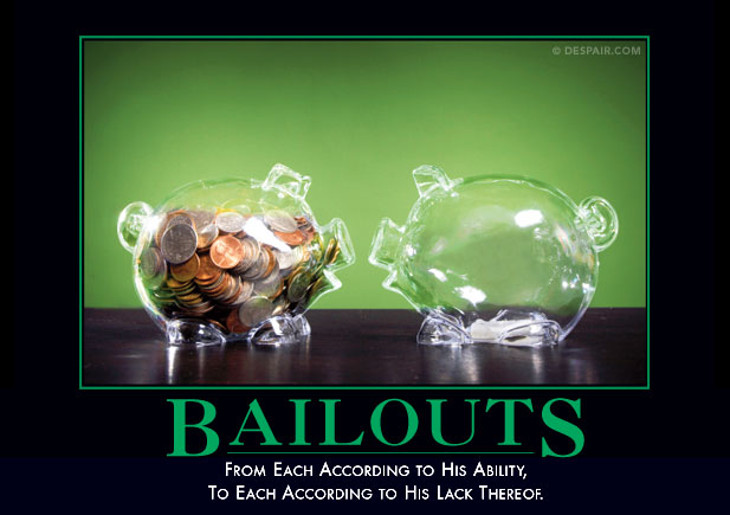 But in reality, what we have here is not a game of playing chicken, with Greece and the Eurozone counting on each other to blink first. Rather, what we are witnessing is a Mexican stand-off of gigantic proportions where almost every member of the Eurozone is holding a gun to the head of most other members and at the same time virtually all Eurozone governments are held at gunpoint by their electorate, something they’ve only themselves to blame. Namely, by bailing out German and French banks with their taxpayers’ money and now trying to make the Greeks foot the bill, they’ve found themselves in exact opposite of Greek Syriza: while Tsipras and Varoufakis promised to end the vicious cycle of more cuts for more money, leading to less growth which creates the need for even more cuts and the need for even more money (and so on ad nauseam), the governments of Germany, The Netherlands and even Slovenia (to name but a few) are under increasing pressure to make sure the taxpayers get their money back.

Thus, a clustefuck of gigantic proportions was created, where legitimate positions of all governments involved preclude one another and are starting to resemble the old joke about an irresistible force and the immovable object. There rarely was a greater need for the (black) art of the European compromise.

The position of Slovenian government is especially interesting in this case. Apparently, finance minister Dušan Mramor more or lees told his Greek colleague Yanis to go Varoufakimself with his ideas of increasing public sector employment and expenditure while everyone else – including Slovenia – is slashing costs to make ends meet. Not that the ends are anywhere near each other – Slovenia will have to raise 1.5 billion, 15% of the budget, in loans in 2015 alone.

Mramor was apparently indignant over the fact that in per capita terms Slovenia is among the most exposed member states in the Greece omnishambles but was having no say in the matter as Tsipras and Varoufakis were negotiating with the big boys (and girl) only. As if Mramor way trying primarily to reassure himself by lashing out at Greece rather than trying to find some middle ground or even support Greece in its, well, “need for more time“.

But reassuring himself or the Slovenian taxpayer Mramor is not. It is more than obvious that most (if not all) money loaned to Greece will never get repaid and that Franci Križanič, FinMin in the Borut Pahor government (2008-2011) was talking bullshit when he said Slovenia will make money with the loan.

Mramor’s going after Greece suspiciously coincides with feces coming dangerously close to a mechanical air ventilator in the case of 3-billion-heavy bailout of Slovenian banks in late 2013.

Namely, accusations were made by Tadej Kotnik (curiously, a biophisycist and vicedean of faculty of Electrical Engineering) that recapitalisation of the banks and especially the accompanying extinction of subordinated bank bonds (in effect, complete nationalisation of Slovenian banks) was illegal, pre-arranged and non-transparent. But the gist of it, it seems, lies in the allegation that the Bank of Slovenia (this country’s central bank, aptly shortened to BS) back-dated a key measure to cover up the fact that eradication of junior bonds was agreed-upon in advance with the European Commission and was not some sort of a last-ditch measure to save the banks.

Now, Kotnik, a private individual and a member of the Association of Small Shareholders, apparently invested heavily in subordinates and thus lost quite a substantial amount of money. He also challenged the bond extinction at the Constitutional Court but the court deferred to the European Court of Justice as the bailout measures were coordinated with the European Commission and under EU law directly.

Anyhoo, the thing is that the Bank of Slovenia, specifically Governor Boštjan Jazbec fucked up their initial response, hiding behind legal clauses and non-disclosure of financial information, thus giving credence to Kotnik’s accusations which are, it seems, mostly based on one or two sources within the BS.

obviously all hell broke loose, with MPs screaming for a parliamentary investigation, various political parties scrambling for cheap political points and Jazbec, after a press conference was finally held, fucking up further with a seriously distorted view of (non)accountability of the institution he heads and the office he holds.

Namely, Jazbec, after explaining that everything is OK and within the bounds of the law and that two wildly different appraisals of the state of the largest bank NLB are not all that unexpected decided to explain the matter further to… the government. As if it wasn’t the parliament who appointed him to the position and as if it wasn’t the parliament who represents the sovereign of this country, the people. Or, as they are more commonly known these days, the taxpayers.

While the government of course needs to be in the loop, Jazbec would do well to address the parliament first, since it was the people’s euros he spent on propping up the banks. But as things stand now, he is making one small(ish) mistake after the other and if he doesn’t stop digging soon, he may find himself in a hole too deep to climb out of. Especially since political parties are scrambling to put a daylight betweeen them and anything that might make them look responsible for the disastrous state of the banking sector. Which is why the Social Democrats are all of a sudden deeply worried about the situation. As if it wasn’t them who ran the financial portfolio in the ill-fated Pahor government (when things started going south for real) and who were junior partners in the Bratušek government which engineered the bailout. Almost the same goes for the SDS, which led the government during the pre-2008 spending spree and which performed a couple of smaller recapitalisations of the NLB (couple a hundred million a pop) and is now screaming bloody murder and demanding a parliamentary investigation.

The reality, of course, is much more prosaic. After Greece and Cyprus, Slovenia was to be next in line for the Troika Treatment. And since the political mantra in the Eurozone at the time was that individual stakeholders, not just the state as such must bear the cost of the bailout, it was more or less obvious that erasing junior debt was unavoidable. Even more. If there is one point where Tadej Kotnik is correct is that the whole process was most likely pre-arranged and coordinated with Brussels. You see, at the time Slovenia for all intents and purposes was under administration, with the European Commission pouring over every aspect of economic and/or fiscal policy, confirming some, rejecting others. And so it seems plausible that the bailout of the banks, the extent and the mechanics of it were approved by the EC before they were enacted by the Bratušek-Čufer-Jazbec trio. That the Commission formally approved the measures taken fairly soon thereafter only goes to strengthen the point.

The above seems to suggest that the problem was not so much in the execution of the bailout but in the definition of the problem. You see, at the time the fate of Slovenia was in the hands of a budget specialist (Bratušek), a higher-level bank manager (Čufer) and a macroeconomist (Jazbec). None of them were in office for a particularly long time, while the country as such was held at gunpoint, not to mention the political turmoil on the home front. For them to understand that the problem was one of policy concept and not (only) of numbers would demand an extraordinary insight. Even more – even if they had the insight (it seems plausible that at least some people advising them did manage a wider outlook), it remains doubtful if they had the room to manoeuver.

Which, not surprisingly, brings us back to the current Greco-German spat. Unlike the Slovenian government of Alenka Bratušek, the new Greek PM Tsipras and his FinMin Varoufakis fully understand the problem is political, even ideological. But they, too, have precious little wiggle room. Because just like Syriza is acting on a mandate by the people, so, too, are the Germans and the rest of the Eurozone. At some point they will have to explain to their voters why they used their money to prop up mostly German and French banks, overexposed in Greece. I’m sure it seemed a good idea at the time and in the panic that gripped the EU when Greece all but defaulted, the last thing anyone wanted was a bank run. But to bailout its banks, the Eurozone took out an even bigger loan with their voters and not being entirely candid on what the money was being spent on.

With this in mind, it is not only Greece that is – in the words of Yanis Varoufakis – resembling a drug addict. The (rest of the) Eurozone, too, is asking their voters trust and understanding they may not be ready to give anymore. Which makes the ruling centrist(ish) parties in Europe nervous which, by extent, leads to some uneasy moments of disturbing clarity, such as German FinMin Schäuble apparently saying the Tsipras government is acting irresponsibly. Patronising, even smacking of colonialism. But in reality most likely nothing more than a show of frustration at the realisation that even if the new Greek government does decide to play ball and continue with the established sparprogram, the game is more or less up and “extend and pretend” is from now on a two-way street.

And that no one knows how long the voters are going to continue buying it.