Election season contiunes. President Danilo Turk‘s five year term is close to an end and this autumn will see the eleventh time Slovenes will head to the polls since 2008 parliamentary elections. After Milan Zver MEP for Janez Janša‘s SDS announced his presidential bid, the hunting season was on and with the SDS candidate already declared, all eyes were on the incumbent president and his possible challeger(s) from the left. 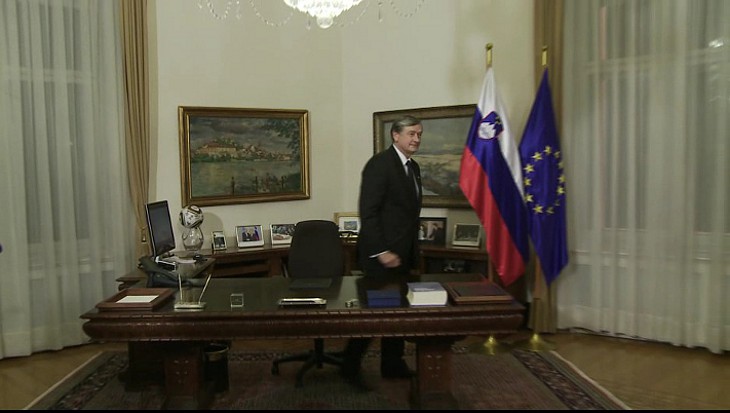 Whose chair will it be? (source)

Namely, as things stand now, Zver wouldn’t stand a chance against Danilo Türk in a face-off. In fact, it is quite possible that his role is one of a token candidate, putting up a decent fight but nothing more. Not unlike Mojca Kucler Dolinar who runs for Ljubljana mayor in the Sunday by-election (more on that tomorrow). But what it would be more than just a face-off?

The question du jour of course is what will Borut Pahor do? The ousted PM and still the leader of the Social Democrats passed on the 2007 presidential bid to win the parliamentary elections a year later. But despite his relatively young age (he will turn 50 only next year) he is widely seen – not in the least by himself – as presidential material, of high personal integrity, seeking conseus and loved by little old ladies. Despite being a subject of an epic asswhooping on 4 December elections, Pahor still wields some serious influence on the political left. He is by no means the unchallenged leader of the left wing as the jury is still out on whether Zoran Janković will become anything more than just a nominal leader of the opposition. But the fact is should Pahor enter the presidential race, he could make life difficult for the incumbent president and just about everyone else.

Namely, a three-plus-way race could split the votes in a totally unpredictable way, not unlike in 2007 presidential elections, when Danilo Tűrk, then supported by SD, Zares and DeSUS narrowly beat Mitja Gaspar (an LDS favourite) in the first round, but then went on to win over Lojze Peterle (supported by entire right wint) with a landslide. Since Pahor is much stronger a political persona than Gaspari ever was, he could well pull it off and make it to the second round.

The Social Democrats are still embroiled in a messy election aftermath and haven’t even come to pointing fingers and calling names, which means they’ve still got some work to do. Which is why President Danilo Türk jumped the gun and announced his re-election bid last week. He did so not by calling a press conference, but ratehr by posting an on-line video on his website. Which was kind of cool, although the cerebral Türk never is entirely convincing in the role of “The Cool Prez”. What’s next? A Twitter account? 🙂

But be that as it may, the incumbent president wants to win the second (and last) term and is apparently not prepared to give too much ground to his challengers. Sure, like Pahor, Türk has his own set of problems. Zver will probably deliver the Huda Jama and Ertl Medal. The SDS will also probably revive their bogus impeachment charges.

On the other hand, Türk will probably beat his opponent sensless with the stick Zver’s very own SDS provided with the Archivegate fiasco and repeat that he was a target of a fabricated smear campaing even during his 2007 election bid. Bottom line? SDS doesn’t really have the means to oust Danilo Türk from office. Unless Borut Pahor helps by entering the race. And he’ll find it much more difficult to do so now that Türk beat him to the punch. What is crucial is that leader of Positive Slovenia Zoran Janković is backing Türk instead of Pahor. Which is not at all surprising, given the fact that Pahor himself hardly moved a finger to show gratitude to Janković for his support in 2008 parliamentary elections and then (supposedly) plotted to derail Janković’s PM bid after the shocking victory of Positive Slovenia in elections on 4 December 2011.

The way things stand now, Pahor would most likely be seen as taking on Türk due to prestige rather than policy differences. Sure, Pahor may appeat to be more conciliatory in nature (especially after a few non-diplomatc outbursts by the usually cerebral Türk), but by splitting the vote too much, he just may give Zver the advantage he needs to build some sort of a momentum. Because even though PM Janez Janša is obviously not seriously entertaining thoughts of holding the presidency via proxy, he will surely sieze the opportunity should one arise.

We’ll know by summer whether Pahor will run on not. He’ll probably do everything he can to run, but the party could stil nix him. Either way, political blood will be spilt. Oh, and Zmago Jelinčič (remember him?) of the Slovene National Party is running as well. 🙂