Reality seems to have caught up quite fast with finance minister Janez Šušteršič. The man who headed the government macroeconomic office (the aptly named IMAD) during the first Janša administration and refused to pick up the pieces after Jože P. Damijan, the would-be wonder boy of Janša 1.0 jumped ship after only 91 days in office, was forced to fork out EUR 381 million to recapitalise Slovenia‘s largest bank, the state-owned NLB. 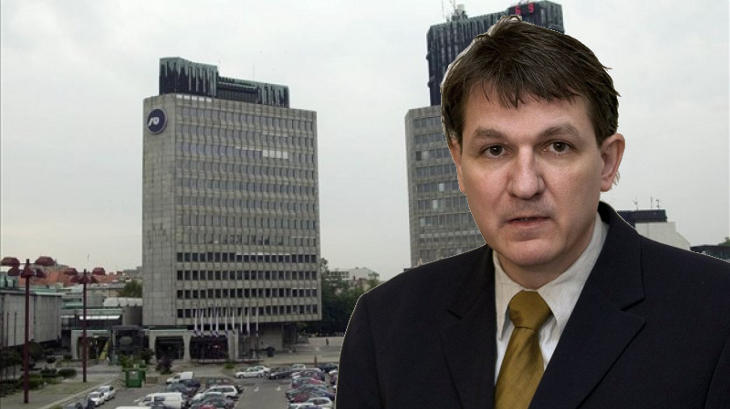 Well, to be honest, the state directly recapitalised the bank with EUR 320 million, while the remainder was coughed up by para-state funds KAD and SOD which is almost the same as if the state gave the money, only it looks better on the balace sheet. KAD and SOD entered the clusterfuck that is the NLB at the eleventh hour, after Belgian KBC bank refused to partake in the operation (after initially agreeing to the deal) and has thus seen its share in NLB shrink from 25 to 22 percent. The funny thing is that only months Šušteršič claimed that not a single euro from the budget will be used to recapitalise NLB. Which means the realisation that no-one will touch NLB with a ten-foot-pole must have come as a rude shock to our austerity-oriented finance minister.

In fact, given the ferocity with which Šušteršič and the rest of the sell-them-all-market-will-know-its-own gang were championing the “market approach” means that what we have witnessed vis-a-vis the NLB was nothing less than an about-face of epic proportions. In other countries, ministers get heavy flak for much less.

OK, fact of the matter is that NLB at this time is about as attractive as three-day-old road-kill and Šušteršič was basically looking down the barrel of a gun, faced with either pumping cash into NLB or hanging it dry. And we’ve seen what letting a bank go bust does, right? But there’s more: Not only did NLB need 380+ million of Tier 1 capital, it also has about three billion of bad loans on its books. And while Šušteršič maintains that most of these loans can and will be repaid, that is more or less eyewash. The bank will never see this money returned, because there is no way for companies who took out these loans (by far and large during the first Janša tenure, when the government encouraged expansionary economic policies) to return them. They don’t have anything to return them with. No competitiveness, no markets, no income, no way to pay the labour force, not even state contracts to offset the above and – finally – no earnings to finance their erstwhile debts.

So, yes, NLB will probably have to suck up losses of about three billion euro. Or about 8,5 percent of entire Slovenian GDP. That’s a lot. And that’s just the biggest bank. Other banks have bad loans on their books as well. Thus the finance minsiter and his boss, the prime minister can assure the country and the world, until they’re blue in the face, that Slovenia will not ask for a bailout of its banks. But the reality is that there will be a call made to Brussels sooner rather than later.

And if the U-turn on NLB recapitalisation wasn’t reason enough, the moment this country asks for a bailout will also be the moment when finance minister Janez Šušteršič will have to ask himself whether he’s fit to continue in this government. In other words: a request for a bailout should be accompanied by a letter of resignation.

The reason for this is painfully simple. Šušteršič positions on the issue, indeed his entire economic platform was about removing the state as a majority owner in key companies. This plan fell apart on the first rock it hit. Yes, NLB needed to be recapitalised and yes, the state is not necessarily a bad owner (although NLB was mismanaged time and again by politically appointed management). Having a the biggest bank in the system limp forward is preferable to letting it sink. But Šušteršič’s political positions which won him the mandate as an elected official, are in direct and blatant opposition with his actions. The two can hardly be reconciled which means that Sloveinan finance minister has a huge credibility problem. And a finance minister with a credibility problem is not something to be looked kindly upon. Just ask Franci Križanič.

But Šuštešič’s biggest problem is not his (lack of) credibility, but the fact that he is, unbeknownst to him, probably earmarked as the fall guy if things go badly wrong. This, at least, would appear to be case since Positive Slovenia announced it will start interpelation proceedings against the finance minister. Technically, an interpelation does not have to end with a vote on minister’s dismissal (although it often does). Instead, it is an instrument of ministerial accountability per se, forcing the minister to explain and defend his or her action.

Now, PM Janez Janša already called starting interpelation this early in the term “nonsense” and at least technically backed Šušteršič up (again, a lovely case of double standards as his party filed an interpelation against Katarina Kresal less then three months after she took office in 2009). But since DL and SDS found themselves on opposite sides on quite a number of issues in the past few days (mostly stemming from the “red star issue”) Šušteršič can be sure that he’ll be made to pick up at least part of the tab.

It seems that the finance minister started this term knowing what his priorities are and falsely assumed that these are other people’s priorities as well (we’ll neglect that these priorities are dubious at best). When challenged about past economic policies of coalition parties in a recent interview with Mladina weekly, Šušteršič answered that he doesn’t care about who did what in the past but is rather interested in what this government will do. And this is the gist of it.

Šušteršič naively assumes that somehow it’ll be different this time around. He really should know better than that. The prime minister is the same. Most of the coalition parties are the same. Most of the key players are the same. Even the problems are the same. How then could results be any different? Remember: I’m not saying that either state or private ownership are inherently bad or good. But the speed at which stated goals of this government and its financial minister have disappeared into thin air is somewhat breathtaking.