Looking at the rampage and looting in London, I can’t help but think of the Ljubljana student riots last year. Compared to what is going on in the British capital, rioting in Ljubljana was a walk in the park, but remembering how appalled pengovsky was after chairs, stones and bottles were being throw above his head into the parliament building and riot police, I can relate to the many Londoners’ outrage at the senseless violence that engulfed the city. 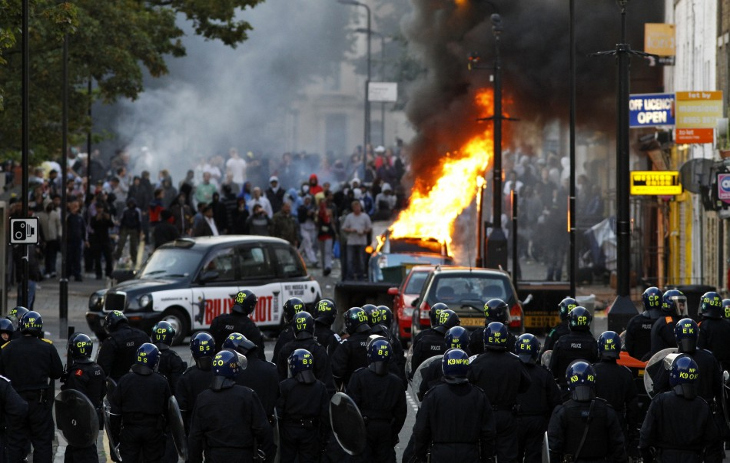 Now, it should be clear that – as far as pengovsky gets it – there was a legitimate reason for protests which then spiralled out of control into thuggery and violence. The police shooting of a suspect in Tottenham, regardless of whether it was justified or not, is never peanuts. And if the community feels that police handling of the situation was to an extent racist, this is not something to be brushed aside.

Secondly, one doesn’t have to be a rocket scientist to put the rioting next to the recession which is apparently following the worst possible scenario. I submit to you that something along the lines of what we’ve seen in the past few days would be virtually impossible prior to, say, 2008. People, who did not benefit from the economic upswing of the past decades have zero incentive to care about anything save their immediate benefit when times get dire. Add to that the dose of revenge and a bleak future ahead and you can see how we come to a situation where the very fabric of the society disintegrates on 24/7 news. (hat tip to @multikultivator for the last two links)

However, having said that, I should point out that while the initial protests might have had legitimate grounds, anything beyond that point deserves nothing but some well directed police brutality. Minorities and/or socially excluded groups, that’s one thing. A lot needs to be done in that department all over Europe, London included. But teenagers and twenty-year-olds going out to have fun without any regard for property, dignity and fellow man (video via @AdriaanN) deserve nothing but a twice over with a baton and a long session in the courtroom.

But that’s where it should stop. I realise a lot of people are hurting and are enraged. But I must say I got the heebie-jeebies when I heard on the BBC that some people were thinking of bringing in the army. Please, don’t. You don’t want tanks on your streets, no matter how mad you are. As Bruce Willis put it in The Siege: “The Army is a broad sword, not a scalpel“.

I come from the part of the world where there was – not so long ago – plenty of army on the streets of its own accord. Indeed, even after Slovenia won the independence it took a while for the armed forces to retreat from the civilian life fully. The army, no matter how well meaning, doesn’t play by civilian rules. And it’s much easier to bring it to the streets than to take it off of them.

This thing will get sorted out. Maybe Dave and Boris will even be out of a job over it. But it should be solved using civilian means.