A few things need to be said with regard to the overall shituation that is the refugee crisis and which has been only amplified by Friday’s attacks in Paris. Namely, the tendency of the left-wing to cry “Fascism!” every time someone does something disagreeable, populist and/or (politically) short-sighted. 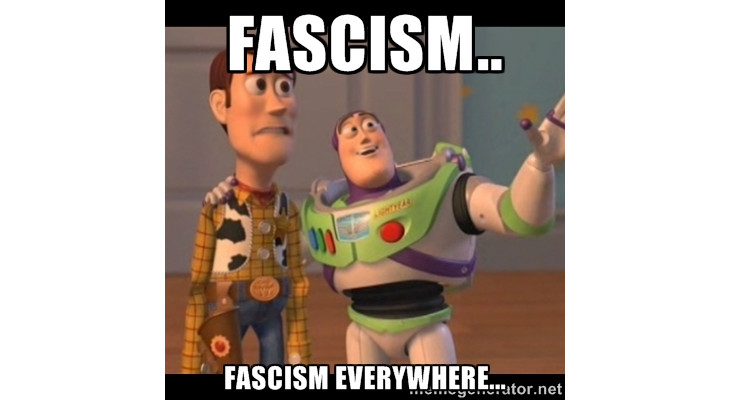 While this phenomenon is far from new it has taken on new dimensions with the influx of refugees and the subsequent creation of the now-defunct Zlovenija (Evil Slovenia) Tumblr, naming-and-shaming couch-Nazis from all over the country. And just as the volume of that debate quieted down from 11 a notch or two, the attack on Paris reignited it. And then some. So, lest we allow vicious circle of polarisation to continue unabated until the bitter end, here it goes..

Fascism, in its many forms, is not really on the rise. Or, to be more exact, it is no more on the rise than it was since the onset of the economic crisis of 2008, when the world (ok, Europe) watched in awe as the neo-nazi Golden Dawn made it into the Greek parliament, immediately attempting to legitimise its street-bullying tactics in a democratic forum. You could go even further back and take the example of Austria, when in 1999 the late Jörg Haider and his far-right FPÖ became the senior coalition partner in Austrian government. Or the fact that Front National is the staple of French mainstream politics since the mid-eighties, with Jean-Marie Le Pen even making it to the run-off of 2002 presidential elections (ultimately losing to Jacques Chirac by a landslide). Even the German Pegida has had its precursor in NPD.

So, the new element here is not really the fascism per se, but rather the environment which is conductive to the elements that are here already. Which is where the political left comes in. Or, rather, it should. But it doesn’t. Ervin Hladink Milharčič, quite probably the best political columnist in Slovenia, wrote some weeks ago that the left-wing would rather hang itself with a rope handed to it by anarchists than make a pact with social democrats and share strategy. And the logic extends beyond the political spectrum, as well.

In most of Europe, you see, the power still lies with political moderates. Yes, there are the likes of Victor Orban, but on the whole, it is moderate politicians left and right of the political centre that run the show. Even Alexis Tsipras has toned down the hardline ideological rhetoric and made a few deals, some of them pragmatic to the core. Combined with the urgency of the refugee crisis, he is no longer regarded as Europe’s key problem (not financially, at least) and is therefore suddenly able to miss deadlines and still get credit lines extended. Just to give an example at random.

The problem is, that most of these politicos are either woefully untrained for the job at hand, or populist, of both. I mean, the values they share are, broadly speaking, European, but their actions are populist, knee-jerk and panicky as well as often tied into a myriad of internal political struggles which may very well cause their downfall on the most irrelevant of things. Take the Brexit referedum, for example. What David Cameron “demands” from other European leaders is, for the most part, achievable. There are some things in there that will just not fly (such as discrimination between EU nationals in terms of labor access) but one suspects Number 10 put that on the list simply as a bargaining chip, knowing full well that it will have to drop it sooner or later. The problem of course is, that even if Cameron makes the deal, the good people of Britain may still vote for Brexit. Be it because enough of them want out of the EU or not enough of them can be bothered to vote in favour of staying. Or maybe simply because the IN campaign fucks up somewhere along the road. Or that other things overshadow the question of economic benefits of UK staying in the EU. A sort of ‘Brexit by Accident‘ as the Reuters put it.

Or take Slovenia, to give another example at random. This sorry little excuse for a country has seen its government take on a borderline authoritarian approach to the refugee crisis, whether PM Cerar likes to admit it or not. The problem is that the moderates who run the country right now are new to the game, prone to fall prey to political mind-games and plots by the more experienced political competition (both within the coalition and without) and are cornering themselves in with “if this than that” statements, setting the inevitable path to wider use of security apparatus, more surveillance and less personal freedom. To be clear: pengovsky is not saying they want this to happen (because they don’t), it’s just that they are making it happen. The government of Miro the Man is like the proverbial boiling frog, slowly cooking without realising it is about to be consumed by what they believe to be a controlled environment. The same goes for moderates of all shapes and sizes. And this is where the left-wing comes in.

You see, rather than hurling accusations of fascism every time a moderate politician does something stupid and/or shortsighted, they should instead try to explain why this or that is a bad idea. Historic evidence suggests the moderates are willing to listen. Even more, what is needed right now is prioritization. A whole lot is at stake, but some stakes are more combustible than others. Which is why in the current the immediate goal of the left-wing (or, rather, of the progressives) should be to support moderate voices across the political spectrum regardless of their “everyday” allegiance, political or otherwise.

Case in point being Žiga Turk, former minister of science, culture, sport, education and what-not in Janša government 1.0 who drew a lot of ire for his opinion on refugee crisis in light of attacks in Paris, over at SiOL.

Now, Turk’s ext had been picked apart by other people. But these are Weltanschauung texts. The man has been known to apply some shoddy statistics and/or science in the past, mostly in terms of cherry-picking information to support a conclusion in advance. And his text can be picked apart on that grounds alone. For example, when arguing the “not every Muslim is terrorist but nearly all terrorists are Muslim” line, he conveniently limits his search query to “Europe” and “this century”.

Now, call me old-fashioned, by I fail to see how the last fifteen years are in any way special in terms of terrorist activity in Europe. I mean, from the end of World War II, the Old Continent has seen separatist terrorism, political terrorism, state terrorism, false-flag terrorism… You name it, we’ve had it: IRA, ETA, Rote Armee Fraktion, Brigade Rosse, bombing in Bologna, Munich Olympic Games assassinations, Lockerbie… And that’s just off the top of my head. Point being that terrorism in Europe has a long and cruel tradition and cherry-picking data to reach a known result amounts to nothing more than pseudo-science. Which brings one of the cores of the text tumbling down.

But there are other elements of Žiga Turk’s text which should not be overlooked. Namely, for all his Theresa May imitation au general the man has shown a welcome moderation with regards to issues of Muslim community in Slovenia en particuliere. In that same text he takes a strong stance in favour of continued construction of a mosque in Ljubljana, which the more rabid elements of the right-wing have called to stop. Now, whatever his motives, this is a position worth supporting. Not only because the mosque is about four decades overdue, but also because if this really becomes an issue once again, the left-wing alone will not be able to protect the meagre progress that has been made on this particular issue in the last years. After all, there is a notable anti-immigration and anti-Muslim sentiment in the left-wing base, too.

To prevent things going tits-up, the moderate forces both in Slovenia and in Europe need to start actively seeking common ground. And it wouldn’t hurt the progressives to make the first move and occasionally swallow hard and thinking twice before hurling accusations of fascism at people who might be confused about the correct course of action. Failing to do so will only drive these people more to the right-wing, where true fascists await, with open arms and a big grin across their Chevy Chase.