In what can only be described as a rout, Miro Cerar won Sunday Slovenian elections in a landslide, winning 36 out of 90 seats, with two of those being reserved for Hungarian and Italian minorities. Thus, the law-professor who in August will turn 51, is the new Slovenian PM-presumptive. 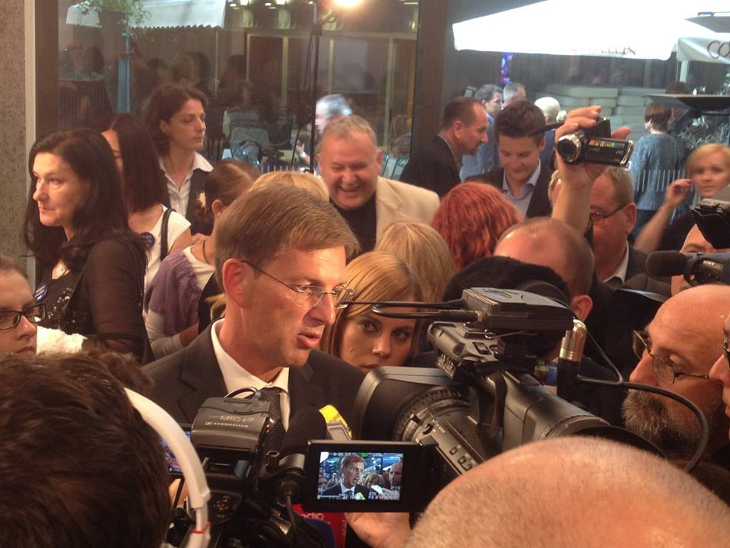 Having said that, the real work begins for Cerar only now. In the election campaign he notoriously avoided taking a position on any specific issue, clearly aiming for (and achieving) a catch-all effect. Even his victory speech on Sunday night was lacklustre, to say the least. It was more of his dalai-lama-meets-law-professor-meets-soft-populist rhetoric, nothing and everything at the same time.

On one hand, this is understandable. Cerar won, but if Zoran Janković, winner of the last elections is anything to go by, it is very easy to squander a relative majority by closing too many doors early on. On the other hand, it was Cerar who was given a clear mandate to rule the country so he needs to start taking positions and dictate the tempo. Until now, he was mostly re-active, for example excluding a possible coalition with Janez Janša‘s SDS only after Janša shot first and excluded a possible coalition with SMC.

The main issue for Cerar therefore is to make sure he does not become a hostage to his coalition partner or partners. Most likely plural. Namely, if here were to form a two-party coalition, DeSUS is his only choice. Which means that every time a sticky issue would come up, Karl Erjavec would balk and threaten with leaving the coalition, thus forcing Cerar to give in. And Erjavec can be really persuasive. Just ask Janša, Pahor or Bratušek.

So step number one for the PM-presumptive is to leave DeSUS out. Which already limits his options. Step number two will most likely be to make sure his is more than just a single-vote majority, again, for the above reasons. This means he will have to reach both left and right. With ZL not being a viable option, Cerar’s possible coalition partners include Social Democrats, Alenka Bratušek Alliance and the NSi. And mathematics suggests he will try to form a ruling coalition will all three of them.

Such an approach would be advantageous for many reasons. Fist, it would put him at a comfortable 51 votes. Second, it would adhere to his pre-election “why can’t we all just get along” mantra. And third (and perhaps most important) it would leave enough room for manoeuvre vote-wise for any of the junior coalition partners to depart from the common line every now and then and still not endanger the 46-vote majority.

Thus, for example, the SD could oppose further privatisation plans (and keep what is left of their electorate happy) while the legislation could still be passed, without endangering either the 46-votes majority or the coalition itself.

And last, but not least, this approach would be reminiscent of the way the late Janez Drnovšek put coalitions together and it is always good to be compared to Drnovšek, even though Cerar right now doesn’t even come close to the legendary PM. However, while Cerar is mulling his next move, the exact opposite seems to be going in the SDS, as their shoot-first-ask-questions-later approach backfired badly.

That the SDS took a beating goes without saying. Sunday saw their worst performance in the last decade and only slighty better than their results in 1996 and 2000 elections. Even worse: when compared to the overall number of eligible voters, support for SDS in 2014 elections boils down to a mere ten percent of adult Slovenians. Granted, this says a lot of other parties as well, but is especially damaging for a party which promotes itself as the only one defending patriotic values and does a lot of flag-waving at every opportunity.

After Janez Janša was admitted to prison due to a confirmed guilty verdict in the Patria Case, the SDS made their glorious leader the focal point of their campaign. SDS MP and one of party vice-presidents Zvonko Černač took centre stage and demanded Janša be released at every opportunity. No longer was their election platform important, they focused solely on Janša, claiming elections are not free and fair without him.

After the results came in, Černač repeated the #freeJJ mantra and added the party will not be taking active part in parliamentary procedure. There were even reports about their elected MPs not actually taking office, but the plan was supposedly dropped as it became clear that in that case new elections would simply be called for vacant seats.

Anyhoo, after the SDS openly threatened to derail parliamentary procedure, media back-lash ensued followed by what was reported as a fierce debate in the party Executive Council. As a result, Černač backtracked on the issue, saying he was “misinterpreted”. Now, let’s take a moment and reflect on this.

What happens when the alpha-male leaves the pack

For the first time on bob-knows-how-many years, the SDS made a complete and unreserved U-turn in a little more than 24 hours. This is the first example of what pengovsky projected the moment Janša was put behind bars. The alpha-male is out of the game on a daily basis and his replacement does not carry nearly enough clout for decisions and moves to go unquestioned.

And there’s a lot of bad blood in the SDS right now. Some of their key people didn’t get elected even though they were thought of as fixtures of Slovenian politics. Cases in point being the above mentioned Zvonko Černač (which means he has even less clout in the party and his position as Janša’s point-man is in peril) as well as Jožef Jerovšek, who served as SDS MP continuously since 1996. Ditto Andrej Vizjak, who got elected for the first time in 2000 and held many posts ever since, including that of minister of economy (2004) and labour (2011).

Moving away from the SDS, Franc Pukšič, the industrious former mayor of Destrnik, who held an MP seat continuously since 1996. Pukšič started as an SDS member but switched to SLS in 2008. Since the party didn’t make it above the 4% treshold, one of the more distinctive features of the parliament is gone. Just like that. Ditto for Pukšič’s much more mild-mannered party colleague Jakob Presečnik.

Rout of the left

The purge of course wasn’t limited to the right side of the political spectrum. Lucky for them, a lot of more experienced SD members decided to retire and had evaded the voters opening a can of whop-ass on them. But the purge of the SD is going on for quite a while now. In six years they went down from thirty (2008) to mere five MPs (2014).

The purge, however, was complete for what was left of Positive Slovenia. The party of Ljubljana mayor Zoran Janković didn’t make it above 4%, reducing Zoki’s aura of invincibility to, well, sundust. Janković is in a lot of trouble right now (both legally and politically) and should start getting concerned with his plans for another term as Ljubljana mayor. His opponents smell and see blood and his tenure in the city hall is all of a sudden much more insecure. The party, however, is more or less dead in the water. It might carry on, but it will remain a mere shadow of its former victorious self.

The caretaker PM Alenka Bratušek, however, fared slightly better. When her fight with Janković split PS down the middle and she and her supporters went to form their own party, her stated goal was to best PS in the polls. Which was kind of weird at the time as the consensus was they should be concerned with making it to the parliament first. But in the end, it turned to be one and the same goal. Bratušek can, in a sense, count herself as coming out victorious. But the price that was paid for her four MP mandates was extortionate. On the bright side, however, she can once again resume comparing herself to Brigitte Nyborg of Borgen 😉

Skipping over the NSi which continues to take its rightful place in the parliamentary political spectrum, even increasing their result by one MP seat, this leaves us with the real surprise of the election Sunday, the United Left (ZL).

The party of “democratic ecological socialism” was looking to Greek Syriza for a role model and is questioning the established order of things. In the end they got 5.96 percent which translates into six seats. They sport a three-member presidency, but it was Luka Mesec, the youngest of the trio of leaders, who emerged as the most recognisable face of the party. It was his appearance on a POP TV-held debate on Thursday, three days before the elections which sent the party rocketing from around 2.5 percent way above the parliamentary threshold, in the end nearly tripling their result.

On a personal note, pengovsky got into a bit of hot water with ZL fanbase for saying that Mesec brought in votes of older women on account of him looking good and saying smart things. A rather tedious debate followed where accusations of mysoginistic statements were thrown in my general direction. But while further analysis did indeed show their voters mostly come from below-45 age group, a third of their vote still comes from 45+ age group. A third, meaning two out of six percent of votes won. Which means, 45+ age group was just as instrumental in pushing the ZL above 4% than younger voters.

Additionally, another analysis showed about 50% of ZL voters decided to pick them in the last couple of days, emphasising the importance of Mesec’s appearance and performance in the debate.

Now, anyone with any experience in campaigning will tell you that TV debates are not really about substance but rather about showmanship. You might have the best platform in the world, but if you’re not telegenic enough or if you make too many mistakes, you might as well throw in the towel. So the point pengovsky was trying to make is that while ZL platform is nothing to scoff at, it was Mesec’s TV performance (his telegenics) that made the difference. But, the fan-base insists it was the platform that brought in the entire six percent of the vote.

Be that as it may, the ZL is in and is bound to shift the political discourse to the left. Which in itself is not a bad thing. Too many things in this society are taken for granted and thought of as set in stone, which is one of the reasons this country moves at a sluggish pace at best.

But theirs is a hard task. They will inherently be branded as far-left, even though one could make the argument they are the only “true-left”, platform wise. Secondly, their set of ideas is only one of many competing sets in the parliament, all of which are perfectly legitimate, some more appealing to one part of the society, some to another. Thirdly, they are newcomers. Pushing your agenda has to do a lot with knowing your way around rules and procedures of the parliament. Fourth, they will need to hold their nerve and not lash out against more experience MPs patronizing them or even setting procedural traps for them, supposedly to “put them in their place”. The parliament is a tough neighbourhood and while everyone is smiling and wears a tie, backstabbing is often the norm. And lastly, the ZL need to be careful not to get smug too soon.

A lot of people invested a lot of hope into them and while the some expectations are unreasonable by default, the ZL MPs were not elected to the parliament to be like other MPs but to be better than them. And that’s a benchmark others before them failed to achieve.