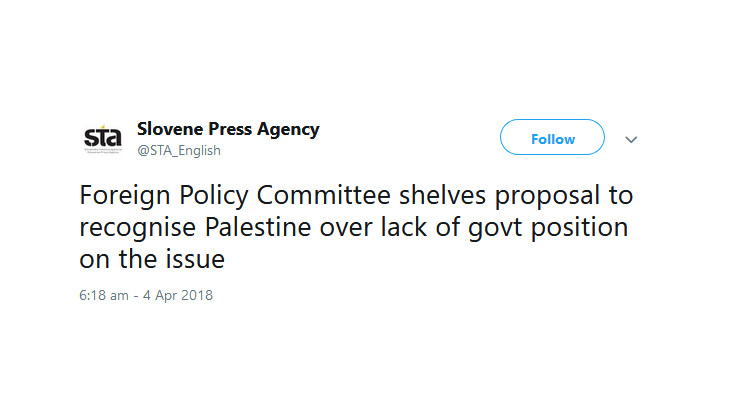 In a completely predictable (and, indeed, predicted) turn of events the much-hyped initiative to recognise Palestine by Slovenian foreign minister Karl Erjavec unceremoniously petered out earlier today as the parliamentary committee on foreign affairs failed to vote on the motion, thus freezing the entire process and for all intents and purposes killing it.

END_OF_DOCUMENT_TOKEN_TO_BE_REPLACED

Remember the excitement that followed the announcement of imminent Slovenian recognition of Palestine? Well, guess what…

Turns out Newton’s Third Law applies to diplomacy as well. Foreign minister Karl Erjavec made a big splash about it, declaring that the time is right, that Slovenia will press on with this regardless of support (or lack thereof) within the EU and that it’s about time this country shows it can craft and independent foreign policy. Only a week later his foot is dangerously close to meeting his mouth.

END_OF_DOCUMENT_TOKEN_TO_BE_REPLACED

One has to feel sorry for the Palestinians these days. Not only are they being roundly fucked over (again) with the US now not even pretending to be an honest broker any-more, they’re also being used as a campaign prop in Muddy Hollows. And you can tell by the photo below Abu Mazen is none too pleased about it. 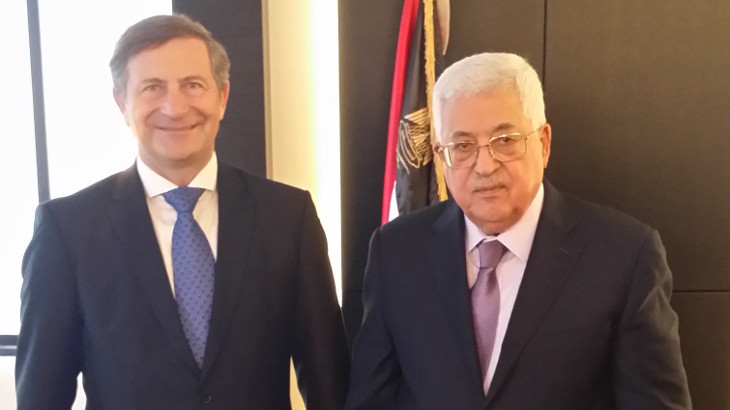 Namely, Karl Erjavec, leader of pensioners’ party DeSUS who also doubles as foreign minister announced yesterday that Slovenia is ready to recognise Palestine as a sovereign country even without concerted action on the part of the EU and has indicated the parliament could vote on this in March or April. What Erjavec hasn’t indicated, however, is the fact that Slovenia will hold parliamentary elections in late May or early June.