It was reported by The Beebs, The Guardian, AP and HufPo while CNN even did a live interview with the man. Sunday last Peter Bossman was elected mayor of the Slovenian Municipality of Piran and thus became the first black mayor in a post-socialist country in Europe. 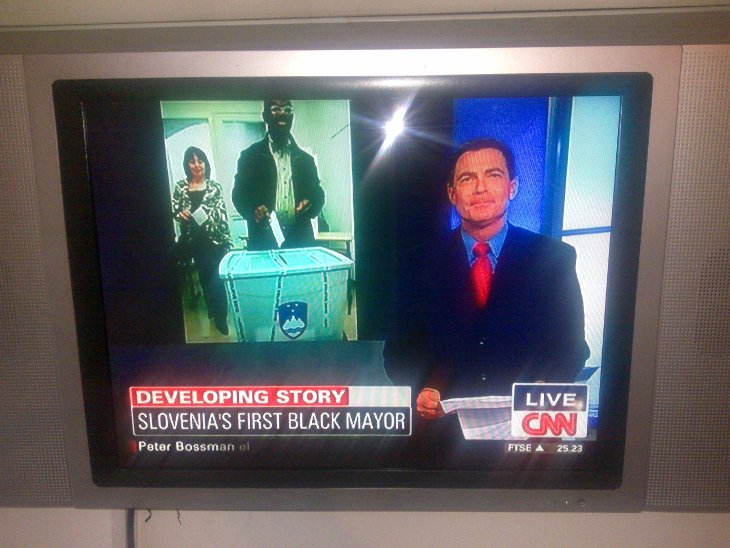 Unlike the death of a certain allegedly prophetic mollusc Bossman’s victory most certainly is newsworthy. If nothing else, this is a first and media love firsts. So the underlying question is what (if anything) does electing a black mayor mean for Slovenia, its people and their attitude towards multiculturalism. The answer, I’m afraid, is – not much.

A native of Ghana, Peter Bossman came to Slovenia (then still very much part of Yugoslavia) in early 1970s to study medicine and stayed here ever since. He married a Croatian-born fellow doctor with whom he has two daughters and eventually settled in the aforementioned picturesque coastal township where today he runs a private practice and is a respected member of the community.

Bossman ran on a Social Democratic ticket and in the second round narrowly defeated the incumbent mayor Tomaž Gantar, a candidate of Piran Je Naš List (Piran is ours). There’s a story behind the origin and the name of the list, but suffice it to say that the “ours” part is suppose to imply “local and regional” as opposed to “state controlled from Ljubljana“.

Anyways. Point being that Bossman won not on account of the colour of his skin but on account of his electoral platform. Which might be good news. Except for the fact that Bossman did not promote himself to voters as black candidate. He’d have trouble doing so anyway as there as there are not all that many black voters in Slovenia let alone in Piran. And this is the crux of he matter. Bossman is one of only handful of blacks in Slovenia, who do not pose any challenge to the established order of white-catholic-male-dominated society. Thus the colour of his skin was not an issue.

Every country has its niggers

Slovenia – especially its impressionable post-independence-born-MTV-infused-and-capitalism-conditioned youth – was quick to catch on to racial stereotypes of the Western world. Those who tread the soil on the sunny side of the Alps long enough will remember Ariel McDonald, US-born play maker for Union Olimpija basketball club who was at some point awarded Slovenian citizenship. He said in an interview that he was shocked by the fact that during league matches fans of the opposite teams would shout insults such as “nigger monkey” at him and then those same people would cheer him wildly during national team matches.

Insulting as it was, this was just people tastelessly mimicking other people’s prejudices. In Slovenia the role of “niggers” as second-class citizens who should be kept as low on the social scale as possible is (neglecting the Roma people) generally reserved for ethnicities of former Yugoslavia, especially Bosnians and Kosovo Albanians (or Muslims in general). The common derogatory denominator for these people is “čefur”.

Pengovsky vividly remembers 2006 when Zoran Janković ran for Ljubljana mayor for the first time and a lot was being said on account of the tell-tale suffix “-ić” in his surname which generally denotes a Serbian, Bosnian or Croatian origin. And this was in Ljubljana, which is supposedly one of the more cosmopolitan areas of Slovenia. Janković then went to great lengths to demonstrate that he is much more of a Ljubljanchan than most of the other candidates, regardless of the fact that he was born in Serbia and lived there until he was eleven years old.

The general conclusion thus being that the only reason Bossman’s skin colour did not play a role in Piran elections is that there are not all that many Ghanians in Slovenia and that the mayor-elect has integrated in the society well. After all, doctors are still among the most respected profession in Slovenia.

And now for the good news…

Piran and the Istra region in general (both Slovenian and Croat parts) have been at the crossroads of cultural influences practically since the dawn of time, even more so since Empress Marie Theresa had a rail road built between Vienna and Trieste, elevating this provincial little town to the status of a strategic port. With trains and ships came people from all over the region and even the globe. And with this developed tolerance. Perhaps of peculiar sort, but tolerance nevertheless. Pengovsky is only guessing here, but it is possible that municipality of Piran, which includes the resort town of Portorož and is heavily dependant on tourism is one of
few places in Slovenia where a black person can be elected to a high public office.

On one hand this of course goes to show that Slovenia in general is still a far cry from a truly tolerant society, but on the other hand it shows that it can be done.

Bossman is not Slovenian Obama

He said so himself in many of the recent interviews he gave for local and world media. And he is correct. And not just because Obama’s policies would put him right of centre on the Slovenian political continuum. Although definitely one for the books, election of Peter Bossman does not represent a tectonic shift in Slovenian society. That will only be achieved if and when Slovenians elect a president of Bosnian origin who will be a practising Muslim. And if you feel I’m adding insult to injury here, try this on for size: we’ll see just how much of a factor Bossman’s skin colour is, when he will start executing his policies and (by definition) begin alienating voters. If he will be voted out of office on account of his policies and/or party affiliation and not his race, then we will be able to claim some sort of progress.