Yesterday’s Slovenian vote in the 2019 EU elections proved once again that Muddy Hollows is an ecosystem unto its own and that any resemblance to Europe-wide political trends is coincidental at best.

END_OF_DOCUMENT_TOKEN_TO_BE_REPLACED

“Never,” said Napoleon*, “interfere with the enemy when he is making a mistake.” Judging by the last couple of weeks, PM Marjan Šarec is well on his way to becoming a case study in the subject matter.

It all started with that infamous poll where Šarec’s government clocked in a staggering 70% approval rating, with LMŠ itself leaving the every other coalition and opposition party in the dust. Things continued with LMŠ giving the cold shoulder to the rest of the ALDE parties and came to a head this week when it transpired that Šarec will not be addressing the European Parliament in its Debates on the Future of Europe.

END_OF_DOCUMENT_TOKEN_TO_BE_REPLACED

Pengovsky didn’t quite start covering EU elections yet, especially due to the early election tug-of-war in this sorry little excuse for a country. But a curious thing happened on the “European front” last night. Namely, during an EPP huddle in Bratislava, Slovakia, leader of the SDS Janez Janša tweeted a selfie with himself and Jean-Claude Juncker, EPP candidate for president of European Commission. 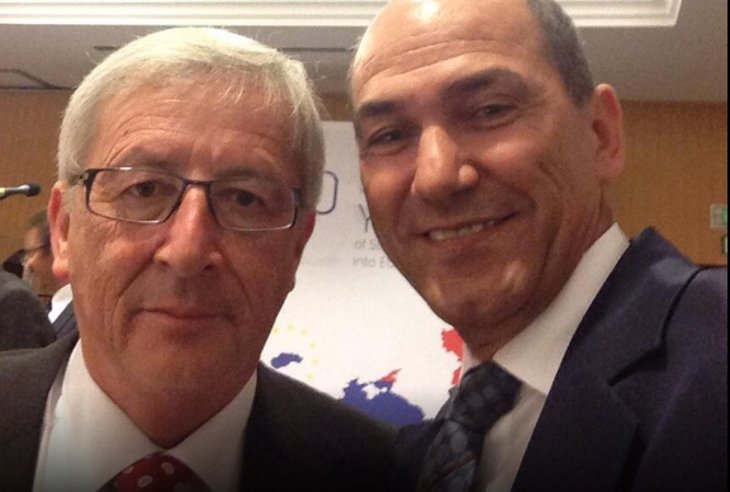 Now, this particular campaign seems infested with selfies and yours truly vowed to unfollow anyone trying to do Ellen on Oscars. Needless to say, victims are aplenty. But selfies aside, Ivan’s tweet raises a whole different set of questions.

First and foremost, the very fact that the EPP candidate for the top European job apparently hangs out with a convict. As both readers of this blog know, Janša was sentenced to two years in prison for his role in the Patria Affair. His appeal was overruled last week which means that barring a deal to commute the sentence, the leader of the opposition will soon see the inside of a prison cell. Granted, in the photo Jean-Claude doesn’t seem exactly exuberant, but hey, it’s the company you keep, right? Doubly so if you want to land the EU boss gig.

Moreover, this photo begs the question, what exactly does Monsieur Juncker think of Slovenian justice system. Does he have nothing but contempt for it, not unlike Janša? Does the EPP candidate for president of European Commission stand by the resolution of the EPP Political Assembly adopted last November which deals with Janša specifically and basically puts him above the law, while reducing Slovenia to a banana-republic? And last, but certainly not least, what is the position of both Jean-Claude Juncker and the political group he represents on the outcome of the trial of Janez Janša?

But since answers to these questions will a) probably never be given and b) if given, can be guessed at quite easily, the real question is, just what exactly does Mr. Juncker (if elected) plan to do about corruption which apparently is not uncommon even at the very top of political elite of EU member states.

OK, so maybe president of the Commission can’t do anything about it on the national level. But the problem is, we can’t really ask Janša about it either. The only steps he’s taking are apparently steps delaying being formally served with the verdict.

But perhaps I’m being unfair. Maybe Jean-Claude and Ivan only shared experience on how to politically survive a spy-scandal. Bob knows Janša’s got a lot of mileage in that department.