This Sunday Slovenia votes on referendum on menial work, courtesy of student organisations backed by the unions. The law, which is primarily aimed at reforming student work in Slovenia had seen some well organised and stiff opposition both from the student organisations and the unions, who were joined by the right-wing parties of the opposition, thus creating an unholy alliance of special interests aimed at shooting down whatever reform attempts this government undertakes. After the law on menial work we’re up for a referendum on pension reform and as of yesterday Janez Janša‘s SDS and Zmago Jelinčič‘s SNS teamed up on the law against black market labour. 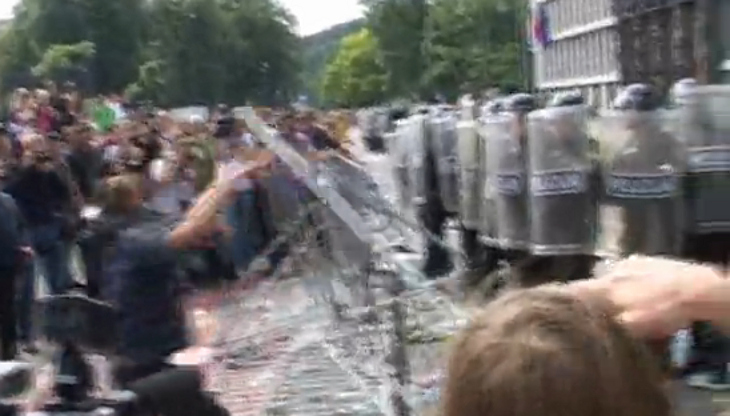 But we’ll deal with those in due course. Today we’re three days away from a vote where campaign brought us a shitload of misinformation, fear-mongering and outright lying on the part of those who oppose it and (it needs to be said) a somewhat lacklustre campaign on the part of the government. In case you haven’t done so yet, it is high time for you to pop over to drfilomena’s who put together an awesome post on the issue (Slovene only) and you can see why, despite certain drawbacks, we’d all be better off if the law were indeed enacted.

Going biblical on their asses

Having said that, pengovsky has a couple of axes to grind. First and foremost: if all were good and fair in this world, after what happened on 19 May last year when the anti-menial-work demo went bad, student organisations and everybody who assisted them in that sordid enterprise (unions included) would be hiding under a rock somewhere.

As far as I’m concerned, anyone who indulges in senseless violence and destruction has no legitimacy whatsoever to be a part of the public debate. I honestly don’t give a pair of fetid dingo’s kidneys if last year’s demonstration just got out of control or whether the three-hour-long rampage was premeditated and planned. Organisers and supporters of that particular rally failed to assume responsibility for the mayhem with people in charge actually fleeing the scene. Without a sincere apology and financial and/or legal consequences, any and all arguments against menial work are null and void. If those who oppose the law cannot face the consequences of their actions, they are in no position to judge actions of others.

But since going biblical on their assess is of little use save venting off some extra steam, let’s look at the reasons for this unholy alliance forming in the first place.

As things stand now, student work is in fact unfair competition to regular labour market. Being a student entitles you to work within a very broad framework virtually without limit either in labour hours or monies earned (at some point you get taxed, but the ceiling is set so high no one really worries about that). On the other hand however, student work spiralled out of control and is becoming mainstream, not the “alternative” labour market. Given the near infinite supply of students workforce (which is performing even the most complex and responsible tasks), there is precious little incentive for employers to take on people full-time. Thus students find themselves in a viscous circle where they are actually forced to keep studying (at least formally) for as long as possible, since losing student status also means losing your job and only gets you a one-way ticket to the dole office.

And this is precisely the reason why labour unions are against the new law. Menial work disbands the student-only labour market and brings in pensioners and the unemployed, endangering the status quo that exists in the job market. Not that things are rosy in that department at all, but rather than being proactive, Slovene labour unions chose to defend the current (unsustainable) situation at all costs. And that includes the pension reform. Their goals are short term and so are their actions.

Student organisations, who in theory should have a vested interest in students finding jobs as soon as possible have instead become used to the substantial income from commissions on student work. They take a ten-percent cut out of all earnings students make under the current system. How that money is spent, no one knows, because there is no oversight, neither internal nor external. In fact Student organisation of Slovenia (the student umbrella institution) has so much autonomy that it can rightly be called a state-within-a-state. Obviously, they are keen on keeping the status quo as well.

And the opposition… Well, they follow a brutally simple logic: whatever is bad for this government is good for them, future of the country be damned.

Just about the only honest criticism of the new law goes long the lines that the new law fails to address problems of the existing system and will still enable abuse by some, forcing others to pay for those excesses. This post by Zloba (also in Slovenian) also writes to that effect. Personally, I think this is a flawed logic. Not just because the new law provides for a centralised database of who’s working where and for how long, but also because it imposes (in my opinion) effective limits both on duration and amount of menial labour an employer can engage. Anything above the limit and the employer in question will have to find other alternatives to get the job done, not just rely on cheap student workforce whose social and health insurance is paid for by the taxpayers.

Namely, under the new law people the time on menial work would count towards people’s retirement age and provide them with social and health insurance as well as additional stipend funds, all of which would be taxed off their income. Given the fact that it will no longer be a student-only labour market, this automatically means more funds for those particular ends.

However, there’s an alternative: if the law on menial work is rejected on Sunday, the government might just as well abolish the student labour market, forcing students to either make it on their allowances and/or stipends or compete in the real job market, working on contracts or as private entrepreneurs with full benefits and taxations thereof. The current situation is unbearable and is in fact working against students’ interests.

Politically, there is a lot riding on this. The few polls that were made on the issue suggest, that the law will be rejected on Sunday. Should this really happen, it will be a substantial blow to the already beleaguered government of Borut Pahor which again got only about 20 % approval rating. The possible rejection of the menial work will not bring down the government, but it will be a bad omen for the upcoming and way more important referendum on pension reform. Should that particular piece of legislation also be rejected, then Slovenia will really find itself in deep shit. In that case pengovsky would not be surprised to see PM Pahor tender his resignation.