It was the best of times it was the worst of times. It was the age of Light it was the age of Darkness. Depending on whether you were Janez Janša or Alenka Bratušek yesterday. Namely, the two former PMs have seen their political outlook clear and muddle respectively less than 24 hours apart. Or so it seems. 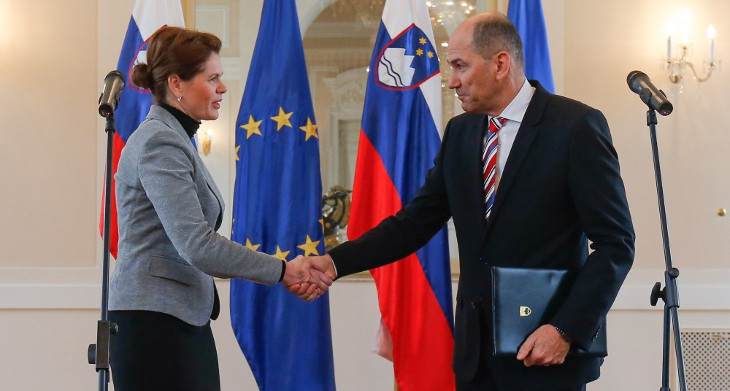 After a retrial was declared in the Patria Case, the newly assigned judge ruled the statute of limitations expired in this case as the alleged crime took place in between August and September 2005, before the Penal Code was changed to allow for a two-year extension in cases where the constitutional court ordered a retrial. There was some speculation that the extension will be granted especially since the new proviso was generally used retroactively, but mostly for post-WWII summary trials, thus paving a way for true acquittal of those innocent people who somehow were in the way of the Communist regime.

Interestingly enough, this was exactly the spin Janša – more precisely, his stellar lawyer Franci Matoz – wanted to make by arguing that he’d like the extension to be granted in order to clear his name in front of a judge rather than simply through a legal proviso. However, you’ll be excused for thinking that the way things unfolded was good enough both for Matoz and for his client. Because, no matter how you look at it, Janša, as well as his co-accused Ivan Črnkovič and Tone Krkovič, as well as Walter Wolf, who fled to Canada, are once again innocent. That the first three will probably sue the state for wrongful incarceration (numbers around half a mil per person are being circulated) is almost a given.

What is not a given is any kind of reset to the way things were before. While sporadic shouts of how this government lacks legitimacy are almost unavoidable, it seems to have dawned on Ivan’s legal squad at least that any scenario involving a rerun of elections is impossible. Not practically impossible, not virtually impossible, simply – impossible. Not in the least because the public have, for all the deficiency and occasional amateurism of this government, come to appreciate the sense of political stability and even dullness of day-to-day politics. Not that there aren’t screw-ups, boat-rockers or a certain amount of mischief in general, it’s just that none of it seems to be cataclysmic.

Not to be discounted is the fact that the Party burned a huge amount of resources defending its Glorious Leader tooth-and-nail. This has had noticeable effect on the ability of the party to form policy and/or take positions on issues not directly connected with the main strategic objective.  Also, a number of high-profile individuals turned out to be lacklustre in the cause at hand and have as a result fallen out of grace of the party leader(ship).  And although this strengthened the party on the inside, it also reduced its reach beyond the immediate rank-and-file. Which might also explain why the SDS, while closely trailing the SMC in the opinion polls, did not get any sort of  lasting bump in the opinion polls. Which also helps explain the overall resignation regarding possible political dividends of the whole affair.

So, while Janez Janša is now scott-free, he and his party are now, optimistically speaking, back to square one, while the political landscape has changed quite a bit. Just how well they can adapt to the new reality and hit the ground running will decide whether theirs will be a slow but sure path to oblivion or whether they will be able to reinvent themselves and form a new and viable political platform. The party proper, however, has also managed to put off the question of a post-Janša future. The operative word here being “put off”, and not avoided. Because sooner or later this will become an issue.

Namely, Jani Möderndorfer, head of the party’s parliamentary group is looking for a new political home. He quit the party and the group yesterday and is rumoured to be on the verge of switching to Miro Cerar’s SMC. All of which pengovsky predicted as early as July. And while the media are focusing on the dire political straits the former PM found herself in, the real story here is the new balance of the Force within the coalition.

You see, when Bojan Dobovšek quit the SMC parliamentary group and went independent, the SD, most junior of the coalition partners, went orgasmic at the prospect of actually starting to matter in terms of securing a parliamentary majority of 46 votes (at that moment SMC had 35 votes, DeSUS 10 and SD 6). Theirs was a short-lived happiness, however, as DeSUS poached Peter Vilfan from ZaAB in late July, thus once again making itself the sole indispensible coalition partner. Should Möderndorfer really sign up for the SMC, Miro Cerar’s party would be back to 36 votes and the coalition as a whole would have a vote more than it began the term with.

The story does not end there, however. The side-effect of Möderndorfer’s jumping ship is the fact that ZaAB is now down to two MPs, one short for making the cut to claim parliamentary group privileges such as hiring staff and advisors as well as securing seats in parliamentary committees. In effect, this means the end of ZaAB as a parliamentary party. And while Bratušek was lamenting the lack of fidelity and loyalty in politics (at which point Zoran Janković probably went all Top Gun), she was presented with a much more immediate problem: how to regroup in the parliament and keep at least some of the resources available.

She immediately tried to form an independents’ parliamentary group, consisting of herself, the remaining ZaAB member Mirjam Bon Klanjšček and SMC renegade Dobovšek, but apparently that won’t fly due to a quirk in parliamentary Rules and Procedures which require that non-aligned MPs not be members of any political party. And Alenka Bratušek quitting Alenka Bratušek Alliance is, well, humiliating. What she could do, however, is call a congress of what is left of her party, move to disband it and notify the president of the parliament that her party is no more. Has ceased to be. Is expired and gone to meet its Maker. Is a stiff. Bereft of life, rests in peace and pushing up daisies. Kicked the bucket and has shuffled off its mortal coil, run down the curtain and joined the bleedin’ choir invisible. That it has fuckin’ snuffed it and that hers is an ex-party.

But that, too, could soon become an academic debate as DeSUS apparently set its sights on Bon Klajnšček as well and should the pensioners’ party poach her, Bratušek’s only chance of seeing the inside of the parliamentary group would be to join an already existing one. For example, the Social Democrats, who have a bit of a tradition for co-opting former MPs who lost their parties. And should this really happen, one could claim that ZaAB had indeed joined Cerar’s coalition. Albeit posthumously.