If there’s one thing to be learned from observing the media and political bubble, is that there is such a thing as too much agreement. When the SoManyPeopleCan’tBeWrong ™ effect kicks in, this should generally trigger a mass hysteria alert. Which is what happened the other week when Bank of Slovenia, the nation’s chief banking regulator tightened the screws on household borrowing.

This caused an uproar in Muddy Hollows, with everyone from Banking Association and youth organisations to the politicians and the media slammed the BS for their supposedly heartless and unnecessarily harsh move. It must have felt good to be a part of the crowd.

END_OF_DOCUMENT_TOKEN_TO_BE_REPLACED

Late last night, after a 15+ hours of debate, the parliament voted to reject the bid to oust finance minister Uroš Čufer. The motion was filed by SDS of Janez Janša and the two basic charges against Čufer were that he backed the Bank of Slovenia plan for a “controlled liquidation” of Probanka and Factor banka, two small sort-of-investment banks which were mainly vehicles for financing ventures of their owners (although Probanka had a small contingent of “ordinary” customers) as well as the fact that he dismissed Andrej Šircelj, an SDS MP, from the board of the yet-to-become-operational Bad Assets Management Company, a.k.a. bad bank. 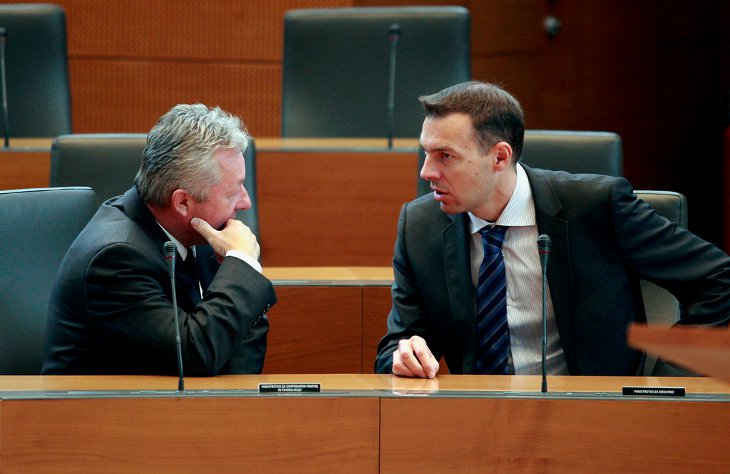 Two ministers: one in resignation, the other one not so much. (photo: Aleš Černivec/Delo)

Now, the move-to-oust, or “interpelation” as it is known around here was filed some time ago and it went without saying that the SDS, which was alone in this venture with NSi and SLS watching carefully which way the wind blows, threw at Čufer everything they could get their hands on. Which mostly meant lecturing him at how he should run state finances.

Which is all fine and well, after all this is a democracy of sorts with a relatively well-thought-out system of checks and balances. The same goes for the interpelation instrument. However, what we witnessed yesterday was not so much a case of oppositional oversight as it was a degenerated filibuster where the goal was not to prevent a measure being passed but to drag the proceedings for as long as possible, hoping that somewhere along the way the coalition would drop the ball and fail to produce a majority vote. In fact, this was nothing short of a shit in political tactics. Namely, about a week ago we’ve seen practically the same approach when the parliament debated the 2014 and 2015 budgets. In a multi-day session which culminated in a Thursday all-nighter, the final vote was cast on Friday at 6 in the morning.

The good old days of touch and go

Now, all-night-sessions are not unknown in this part of the world. When shit was hitting the fan while Yugoslavia was disintegrating and the whole Slovenia situation was touch-and-go we used to see them regularly. In fact, one could argue that all-night sessions of the parliament or another high-ranking body were the hallmark of the era. And it seems as if the opposition is trying to bring back the aura of emergency and instability.

Not that there was any lack of urgency to begin with and until the budget was passed, the Bratušek administration sure as hell couldn’t be filed under “stable”. But ever since Janez Janša was toppled he was looking for ways to undermine the current government in any way possible. True, the ruling coalition is perfectly capable to undermine itself (as we’ve seen time and again in the past months) but it would appear there’s some movement in the right direction.

One could argue that Bratušek and Čufer achieved with this budget what Janša and Šušteršič couldn’t. Namely, get at least half a nod from the EU and effectively take threat of the Troika descending off the table at least temporarily. And as demonstrated in the previous post, for Janša the equation is simple: no Troika, no return to power any-time soon. And a derailed budget or a toppled finance minister are not to high a price to pay, apparently. Not to mention inevitable relegation of Slovenia to protectorate status in case the Troika materializes.

Again: Slovenia is not out of the woods yet (not even close) but a hint was given we’re on the right path. And that is not good news for Janša.

But as someone recently told pengovsky, this country doesn’t have as much of a financial problem as it does have a management problem. Both in government and in business. Which is one of the reasons we find ourselves in the shit we’re in. Case in point being minister of economy and technology Stanko Stepišnik, who was forced to resign yesterday evening over a repeated issue of his tools-manufacturing company Emo Orodjarna applying for and being awarded government grants while he was in office.

Now, there’s a caveat to this: until recently, there was a strict prohibition of companies (co-)owned by public officials applying for tenders with the institutions their owners worked for. I.e.: a company a minister or a member of his family owned (at least partly) could not apply for a grant within his ministry’s purview. Some years ago there was even a complete prohibition for such companies doing any business with any government institution, but that was struck down as unconstitutional. But even this watered-down prohibitive clause was too much for some and was reduced even further by the last Janša administration (albeit at the behest of the SLS) and now stipulates only that people with a conflict of interest should remove themselves from the decision-making process.

And when it transpired that Stepišnik’s company did in fact apply for a government grant at Stepišnik’s ministry, it was all perfectly legal, since Stepišnik did in fact remove himself from the decision-making process. And yet, it failed to dawn on him that simply is not the way things should be done. It took further revelations of his company applying for additional tenders and – this clinched it – apparently falsely stating there are no possible conflicts of interest in one of the tenders for Stanko Stepišnik to finally realise he is in an unsustainable position.

However, since Stepišnik was an MP for Positive Slovenia before assuming ministerial duties, he is bound to return to take his parliamentary seat, making the situation no more agreeable. Now, arguably, Stepišnik’s resignation is a good omen as it is the second minister in Bratušek administration to resign over a similar conflict of interest (Igor Maher having done so after only 12 days in office) and it shows this government does have a sense of appropriateness. Also, Stepišnik was widely tipped to be let go once PM Bratušek wins the vote of confidence, so there’s no real harm (political or otherwise) in him being replaced.

The necessary vote of confidence

But it does show that – despite the fact some people were mocking Bratušek for tying it to passing of the budget – the recent confidence vote was much more crucial than most people thought. It finally gave her the leg to stand on politically and rallied the coalition around her, at least temporarily. And it appears finance minister Čufer is one of the cornerstones of her political credibility. Which is why she took the somewhat unusual step of the PM addressing the parliament and defend her minister during an interpelation.

This, of course, did not go unnoticed and you can be sure Čufer will find himself the target of much more elaborate attacks and insinuation than just a case of a disgruntled opposition MP who – due to a legal provision, mind you – lost his 6k EUR monthly paycheck in the bad bank which came on top of his 4k monthly MP salary.

Finance minister Franci Križanič is on the outs, it seems. Yesterday the Court of Audit released a follow-up report on several issues pertaining to ministry of finance, and in several cases found that no improvement was made and declared a grave dereliction of duty by the ministry and as a result recommended to Prime Minister Borut Pahor to start the demission procedure for minister Križanič. 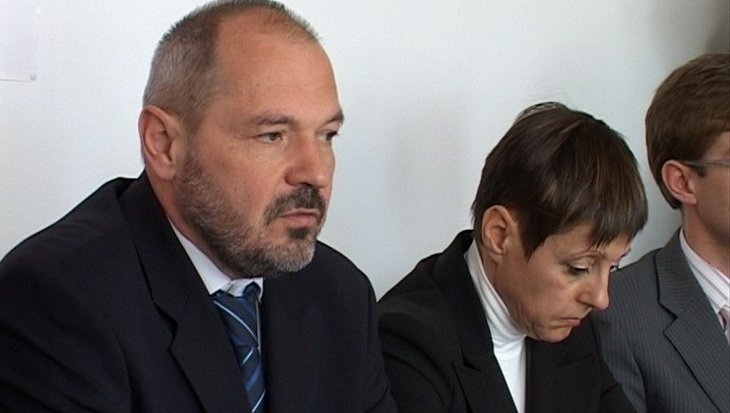 This basically a remake of what was happening to Karl Erjavec of DeSUS a year ago almost to the day. Back then PM Pahor said publicly that he has no choice but to heed to the request of the Court of Audit and this should be the standard course of action from now on. Which puts him in a bit of a tight stop this time around, especially since Franci Križanič is not just anybody but a heavyweight of Pahor’s very own Social Democrats. On the other hand, he is also very accident prone and has had Pahor save his ass publicly on a couple of occasions. Without going into too much detail, the gist of the matter is that in the opinion of the Court of Audit the ministry’s accounts are not up to standard. This is not something new and the auditors first raised hell way back under Janša’s government, when finance portfolio was held by all-but-forgotten Andrej Bajuk and it is safe to say that things go even further back. But the point is that the ministry is now run by Križanič and that things still aren’t in order.

Officially, PM Pahor gave Križanič a week to explain himself and the finance-minister-in-peril already said that he has no intention of resigning. However, this is more or less the same song we’ve heard in case of Erjavec. In fact, rather than being between a rock and a hard place, Pahor might be looking for a remake of that particular hit-single. We’ve seen time and again that a vocal support from the prime minister can soon crumble into sun dust, cases in point being several former ministers. Furthermore, Pahor has the ability to play stupid and claim no hidden agenda to the point of everyone else’s huge embarrassment, usually resulting in other people doing his dirty work. And so far all the signs point to Pahor cutting Križanič loose.

So, why would he do that? First of all, Križanič is about as popular a fetid dingo’s kidney. True, finance ministers tend to get that way, especially during times of economic crisis. But apart from objective reasons, Križanič has has more than his share of fuck-ups. He is also apparently heavily at odds with minister for development Mitja Gaspari who (apart from being former governor of the Bank of Slovenia) once held the post of finance minister so he pretty much knows the turf. But the main issue seems to be the immediate fate of Nova Ljubljanska Banka (NLB) the largest state owned bank, where Križanič supposedly favoured strong state ownership, while Gaspari suppose to be a bit more, well, liberal, in that respect.

And then there’s the inter-party thingie. Križanič is an SD heavyweight, especially powerful within Ljubljana branch of the party. It was some time since Pahor shook up his own party ranks and opposition within the party has built up in the mean time. Križanič represented the more “social” part of Social Democrats and was apparently on good terms with old party hands and also won praise from the party’s youth organisation (not that the latter bears any significance). So what we are witnessing might possibly be described as killing a few stones with one bird, with PM Pahor giving the finger to the opposition within the party as well as getting rid of a minister of mixed fortunes and who just might have outlived his usefulness.