Years ago, while pengovsky was doing a stint at a small privately owned press agency, a funny thing happened. The owner, an old-school journo, had good contacts in the Balkans and was approached by one of the many media emerging in post-Milošević Serbia on the issue of human trafficking in Slovenia. The man did some preliminary research, arranged interviews, provided support, stuff like that. He’s a nice guy, although cranky at times. But then, all of a sudden, interviews were being cancelled. Government officials remembered they’ve urgent stuff to do, press officers started stalling and out of a three-days-worth of field work he was left with one NGO, still willing to talk to them. 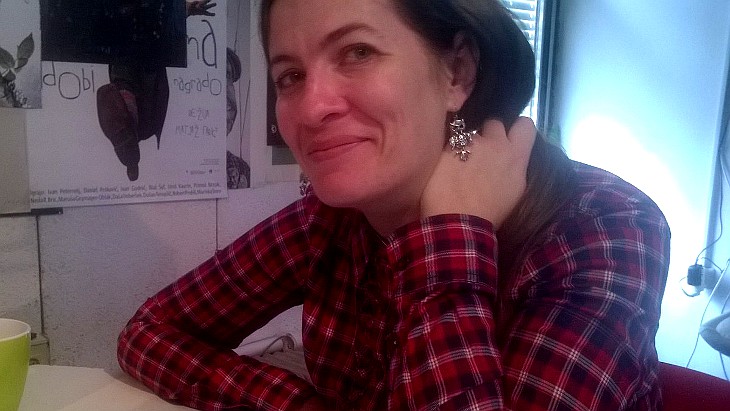 Anuška Delić of Delo newspaper. SOVA has a thing for her.

After the interview, with the Serbs already on their way back home, the offices of his press agency were burglarized. This was in a complex where CCTV surveillance was in operation 24/7 and where security guards make rounds as well. But that night, outdoor lightning suddenly went and the camera which could have caught the perps in plain view was malfunctioning. In a three-office business, loaded with technology, the only thing they took was the owner’s laptop and just ransacked the place. A person was arrested for the theft but he later wrote a letter to my boss saying he was just a scape-goat since he did burglarize a couple of other places that night. To this day the owner of the press agency says the incident reeks af a spook job, a “shot across the bow” by SOVA, Slovenian secret service, aimed at frightening him into playing nice and stop asking the wrong kinds of questions.

The case of Anuška Delić

Fast forward ten years and Anuška Delić, a Delo journalist is under investigation for allegedly publishing classified material. Charges were brought against her by none other than SOVA, the prosecution apparently agreed and wrote up an indictment and filed it with the court where it lay for almost a year. But now for the fun part: Delić was writing about Neo-Nazis in Slovenian Army and am alleged connection between Slovenian branch of Blood & Honour and Slovene Democratic Party of Janez Janša which. Published in 2011, just prior parliamentary elections, her series of articles sent shock waves through the political arena.

Now, Slovenian Neo-Nazis are a curious bunch. Pengovsky still likes to tell a story (supposedly true) from their sorry beginnings when they applied for membership of the international Blood & Honour organisation in London but were refused on account of Untermensch status of Slavic peoples in general. Well, times have changed and although beaten into submission by punkers during 1999 anti-Haider protest in Ljubljana, they’ve regrouped enough to star afresh. This time much more organised. In fact, by some accounts they were so organised that the only thing that prevented them from starting to make trouble in the open was the fall of Borut Pahor’s government in 2011. And it was at that time allegations of connections between Neo-Nazis, Slovenian Army and SDS emerged, sending Delić to do the thing she does.

Shameless plug: At that time Pengovsky also wrote a column on SDS drawing parallels between their own ideology and Neo Nazi mantra “you’ve got law on your side, we’ve got justice on ours”.

Anyhoo, after some political wrangling Janez Janša took power in 2012 and (logically) replaced head of SOVA, the latter files charges against Delić fairly soon. This of course is nothing but a politically motivated intimidation of the most repulsive sort. But most importantly, it re-establishes a pattern of abuse power.

Namely, SOVA legaly does not have the authority to go after Slovenian citizens and must leave any such case to the CrimPolice. Curiously enough, in 2000, during Andrej Bajuk government where Janez Janša served as defence minister, Blaž Zgaga of Večer daily and later of Patria Affair fame, was given a similar treatment for leaking military secrets (cooperation between US and Slovenian military intelligence). While his appartement was searched by the police, personnel from military intelligence reportedly took active part in the investigation which should not have been the case, since military services can only busy themselves with military personel. Point being that every so often in Slovenia journos are subject to various (semi)clandestine services throwing the book at them – or worse.

But what of Anuška Delić? Pengovsky and Nataša Briški did a podcast with her for metinalista.si where she explained how things went down. The podcast is in Slovenian, but here’s a decent interview she gave to Lawyer Herald in English. There’s been enough commotion internationally for the OSCE to start asking questions.

Now, on one hand this reeks of attempts at curtailing media freedom. Demanding that a journo reveal his/her sources is just wrong. But on the other hand, this is more of a psychological warfare than anything else. Despite what the SDS will have you think this still is a democracy. Journalists don’t disappear, they aren’t beaten up by masked thugs and save an occasional threat they can pretty much do their job. Indeed, the main threat to media oversight in Slovenia is not state control or threats of physical violence but journalists’ social security. Much easier to have a “cooperative” journo if he or she finds it hard to put bread on the table. But I digress…

SOVA admits more than it wants to

At the end of the day, the whole thing is hugely embarrassing both for SOVA (which went from a respectable service to a joke, mostly by abusing it for political needs of Janez Janša and the SDS – that included blowing a cover of its safe house in Ljubljana and derailing a joint SOVA-BND operation) as well as for the state in general. Which is probably why the indictment was put in a bottom drawer and almost forgotten until now. Because if it was thrown out, all hell would break loose about judiciary being infested with “left-wing fascists” or some other derivative of SDS propaganda. But if the case went forward it would constitute an implicit admission that reporting of Anuška Delić was spot on and that the documents she used, regardless of their nature, do indeed prove a link exists (or did exist at the time) between Slovenian army, the SDS and the Neo-Nazi element.