The ordeal is finally over. Borut Pahor was elected to a second five-year term, fending off a second-round challenge by Marjan Šarec, the mayor of a mid-size town in central Slovenia. But although Pahor’s victory was expected, he had to work harder and longer for it and won with by a much smaller margin that generally expected at the outset of the campaign. 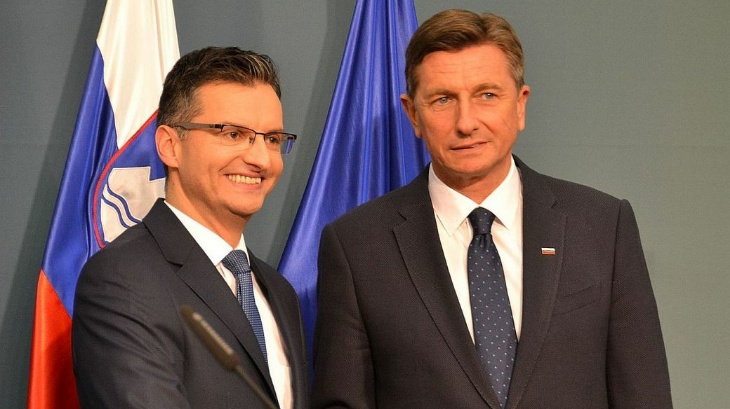 The runner-up and the incumbent (source)

Still reeling from the clusterfuck after the first round when a number of of prominent polling agencies called the race for Pahor even ahead of the vote, the pollsters were more or less on target this time around. Most of final polls coalesced around 55/45 percent for Pahor but the final tally showed Pahor won in the end by 53 percent to Šarec’s 47 percent. That’s a mere six-point spread.

The point here being that a relative novice gave the incumbent and a political veteran of thirty years a run for his money and came well within the range of creating an upset. But not because Šarec is some sort of a political prodigy but because Pahor, contrary to the campaign five years ago, was such a shitty candidate.

But the main takeaway of this election was not so much the end result which – as close as it was – did not bring an upset but the turnout. Or, rather, the lack thereof. A mere 41,84 percent of the voters bothered to cast the vote in the second round as opposed to circa 44 percent in the first round. While a lower turnout the second time around was expected and was on a par with the voting in the second round five years ago, the numbers are indeed worrying.

Almost 60 percent of the electorate did not show up at the polling stations. This is of course their right but since the office of the president of the republic is supposed to be a symbol of authority (moral and otherwise) the conclusion as to what the people largely think of the those attempting to enter this office is uncomfortable to say the least.

Five years ago Slovenia was in the midst of the Winter of Discontent with granite cubes flying in one direction and canisters of tear gas flying in the other while a massive popular uprising demanded and end to corruption and austerity policies. The level of trust in politics and the institutions of the state was at an all time low. This year, however, the seas were much calmer. No protests, no “gotof je” (take the bums out), no gas canisters. And yet the turnout was even marginally lower than in 2012.

But it gets worse. Crunching the numbers further, it becomes obvious that a full 80% of the voters did not vote for the winner. Borut Pahor won just north of 300k votes (out of 1.7 million eligible) which is a 100k less than during the tumultuous 2012 campaign and only 40k more than the runner-up Marjan Šarec.
This is not to say that Pahor’s victory is somehow illegitimate (as Janez Janša predictably insinuated) but it does show that there is an enormous pool of heavily disenchanted voters just waiting for the right sort of a populist authoritarian leader to plunge into.

True, Muddy Hollows has seen its fair share of populists and authoritarians. So far they have either been incompetent of self-destructive. But if the trend continues (and it shows no signs of abating) the arrival of a popular authoritarian who is versed in the intricacies of governing is only a matter of time. And with it the degradation and downfall of the democratic institutions. It’s not as if it would be the first time.

Speaking of democratic institutions, the parliamentary elections are due sometime in the next six months. The unofficial campaign has been going on for the better part of the year with the government rolling back austerity measures, agreeing to pay rises in the public sector, opening new construction projects and generally doing things governments do when it is time for the voters have their say on the matter.

But things are bound to get ugly. In the days leading to the presidential election the right-wing NSi and SDS supported Borut Pahor for president even though he was nominated by the left-wing Social Democrats (SD). This echoed their support for him in 2012. The difference this year being that the rank-and-file and these two parties did not heed the calls by the leadership and largely voted for Šarec even though he was depicted as an old-school hard-line leftist by the PR machines that cater to the right-of-centre demographic.

Which creates quite a conundrum for the parliamentary vote. The NSi and the SDS need those votes back and with Šarec being widely expected to launch his party on the national level, they will need time to do that. Which is why it is no coincidence that president Pahor announced tentative dates for parliamentary elections (late May or early June) thus pre-empting the possibility of the parliament dissolving itself a couple of months earlier. Not that he has any real say in this as the parliament can dissolve itself by a plurality at any time, but it does add pressure to an already overheated environment.

Funny thing is, though, that the two players who would benefit from parliamentary elections being held sooner rather than later are Marjan Šarec who is hoping to cash in on the political capital and the brand he built during this campaign and Pahor’s very own Social Democrats. They’re riding high in the polls these days and will in all likelihood gain an additional bump on account of Pahor’s victory in the presidential election. But, as per usual, Pahor is much more keen on indulging his frenemies than his allies.

As for Šarec’s parliamentary ambitions, he will soon find out that the field is somewhat crowded and that a presidential campaign is a walk in the park compared to the ruthlessness and complexity of the race for the parliament.