Remember when pengovsky wrote that the new same-sex weddings legislation is not yet home safe? Well, guess what… 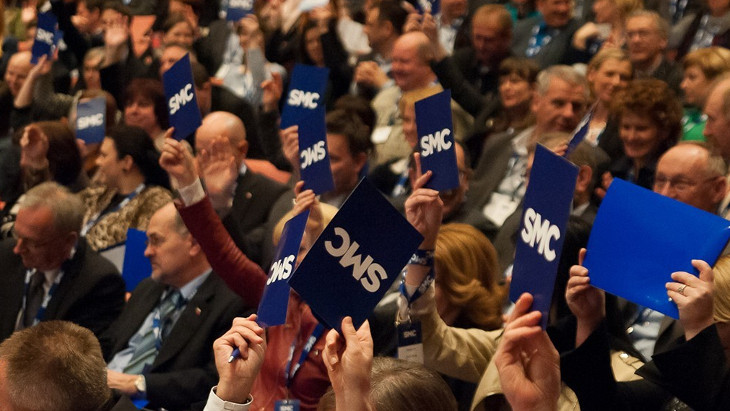 The SMC seemingly flip-flopped on the issue, saying they will not challenge a referendum initiative which would yet again put up the same-sex weddings issue to a popular vote. Naturally most of the supporters of same-sex weddings went apeshit and the SMC was served a proper Twitter-storm. Its intensity was probably confounded by the fact that in the eyes of many people the SMC finally saw the light by voting in favour of the legislation (and doing so en bloc) but has now retraced its steps and found itself on its pre-election neither-nor position.

And, admittedly, it did not look good. Even since Aleš Primc and his band of merry men initiated yet another referendum bid to strike down this harmless but ideologically very loaded piece of legislation, it was more or less the accepted wisdom that the parliament will use the recent changes to the constitution to their fullest effect, prevent the referendum on the grounds of this being a human-rights matter and then let Primc fight it the Constitutional Court. Well, apparently not. At the very least, not just yet. Namely, the ruling SMC stated they’ve no intention of denying the people a vote on an important issue. Later they’ve signaled the decision may be revised but at any rate this turn of events made a lot of people unhappy and they sure let the SMC know.

There are a couple of ways to digest this. The most obvious one is to say that the SMC flip-flopped on the issue or – even worse – that its support for the legislation was not genuine but rather a price they had to pay to join the ALDE (liberals) political group on the european level. This is possible, especially if reports from some months ago are correct and UK LibDems did indeed take issue with SMC sitting on the fence on this prior to elections. But one would like to think that European parliamentary groups take themselves slightly more serious than that and that a true about-face on same-sex weddings would have wider recriminations for the offending party.

So chalk that one to “possible, but not likely” column. A bit more likely is the possibility of the SMC parliamentary group not being entirely on the same page on the issue. There are thirty-six SMC MPs, most of them with little political experience and – understandably – of 50 shades of liberal ideology. So the decision not to go against the referendum head-on (not yet, at least), might have something to do with that. Keeping 36 people on-board on a highly divisive issue while they’re all lobbied and bombarded with arguments from all sides is not an easy task.

And finally, it could be the party simply got scared of its own power and what it can do with it. With great power comes great responsibility and never in the history of Slovenia did such a greenhorn party with such a politically inexperienced leadership hold so much power. And it seem probable, to pengovsky at least, that the moral imperative of ethical policy making simply got the better of them. As a result, Slovenia will once again be the battleground of rational-but-useless arguments in favour of same-sex weddings, opposed by emotional outcries backed up by manipulations, fear mongering and blatant lies by the opponents. The rhetoric is already there. Now it will only get worse (Slovenian only).

But the referendum rules have changed since the Family code was struck down two years ago. Which brings us to the fun part.

Because while the SMC said it will not impede the referendum initiative, there are unofficial signals it might back the bid to prevent the referendum. And while the (centre-)left parties are pushing forward with the bid, they can do didly squat without votes of the SMC. The way this works is that once the petition to hold a referendum is filed, the parliament can decide by a simple majority the referendum is illegal as it deals with basic human rights which then leaves it to the petitioners to challenge the decision at the constitutional court. And with the current composition of the constitutional court suggesting anything but a clear dismissal of the referendum, it seems reasonable to expect that the legislation allowing same-sex weddings will be challenged on a referendum one way or another.

And if there is a referendum, the new rules stipulate that the legislation is struck down if a majority votes against it, but only is this majority represents more than 20% of all eligible voters. Which means about 340.000 people will have to make the effort and cast their “no” vote on referendum day. Which is quite an obstacle.

With this in mind, other dimensions open up which put the SMC decision into a slightly more nuanced perspective. For example, it is not entirely clear whether the special session of the parliament can already be called. Namely, if you wanted to truly dot the i’s and cross the t’s (as lawyer-heavy SMC is probably inclined to do) it seems reasonable to wait and see whether the referendum petitioners will actually collect the necessary 40.000 confirmed signatures. While they’ve done it before, this is a condition that should not be taken for granted. If by any chance Primc & Co. fail in collecting the signatures, then the whole brouhaha will have been in vain and the SMC will have been vilified for nothing. Politically, at least. At the very least, this means the party still has about three weeks to decide whether to fight the referendum in court or not.

But the last – admittedly most wildly optimistic – scenario is also the most interesting. What if, just what if the referendum is held without being challenged in court and fails? What if the majority of the people votes in favour of the law or at the very least decide same-sex weddings are a non-issue and don’t bother to vote, thereby helping the legislation to survive? If that were to be the case, the SMC would suddenly be in the position to claim it gauged the public mood much more accurately than any of the left-wing parties. And even if their reasoning did not go this far, a favourable referendum outcome would give them back much of the political credibility they’ve lost in the past couple of weeks.

At any rate, there are a number of ways this story can unfold and not all of them are negative. But as pengovsky was warning even as the left was celebrating, the hard work had only begun.

4 thoughts on “Same-Sex Legislation (Predictably) Not Yet Home Safe”