Yo, MC Miro, huddle up! Congrats on yesterday’s PM confirmation and all that jazz, but pay attention now. 57 votes in favour is a sweet thing but keep in mind the storm is just brewing. Admittedly, pengovsky is on vacays these days and follows events at home sporadically but there seems to be a consensus that you didn’t do a particularly good job with your acceptance speech. You gotta work on that, dude. 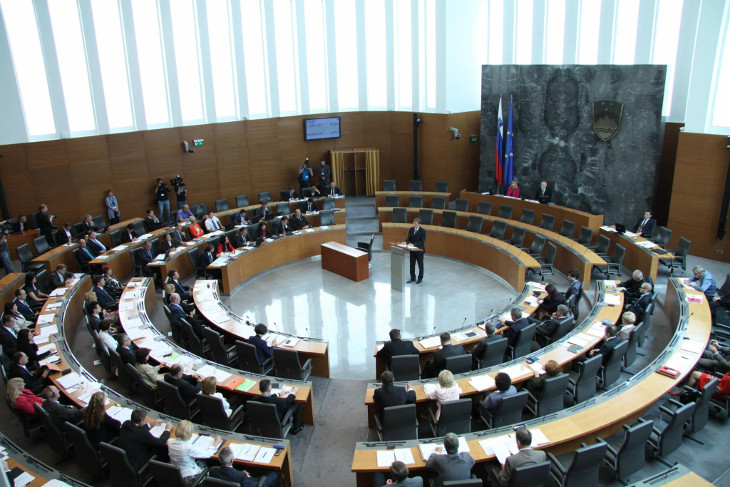 Now, I think we are both in agreement that you more or less fucked up putting your coalition together. I mean, just DeSUS and SD? What’s wrong with you, man? No, seriously, you’ve willingly put yourself in a position where Karl »I-want-a-prestigious-post-with-little-actual-work« Erjavec can grab you by the balls and swing you around every time he feels threatened.

The SocDems don’t even count. Not to mention that DeSUS and SD were once part of the same flock and have even tried to form some half-baked form of a coalition before the elections. Point being they are much more likely to conspire together against you than letting you play them one against the other. Also, let us not forget that both SD and DeSUS are teeming with veterans of the national political cess-pool and will take you to the cleaners the first chance they get.

Because that’s what’ll happen. If you think the two junior coalition partners will not seek to empower themselves and/or make up for the losses they’ve suffered on 13 July, you’ve got another thing coming.

Three years ago Ljudmila Novak of the NSi dropped an epic put-down to Zoran Janković in his PM bid telling him that he needs to learn to count to 46. But you seem to have taken that particular lesson way too literally. Sure, 46 is the magic number, but there are ways to get to that number and there are ways to get to that number, if you catch my drift. You really shouldn’t have given your predecessor such a cold shoulder. Alenka Bratušek and her four votes would have come in mighty handy pretty soon. To put it bluntly, you are now in a position where Karl Erjavec always (and I mean, always) holds the key to your 46 votes. The man really deserves his middle name. Victor.

And if you’re congratulating yourself on kicking out certain political forces (the word on the street is that »you weren’t going to give in to the people ran by Gregor Golobič«), stop it, while you still can. Slovenian politics is full of bogeymen. Some people hoist the banner the moment someone mentions Janša. Some people see Golobič in every shadow. Others think Milan Kučan at his advanced age still runs the show. Fuck, there are probably people who’ll swear that Edvard Kardelj is still alive and pulling the strings! But in reality, what we have here is just a succession of progressively bad moves by progressively challenged people who were elected to positions they were not fit to hold in the first place.

Really. There is no conspiracy. You need to remember this as you’ve just invited the person who invented the phrase »uncles in the shadows« into your government. You’ve also made a deal with a politician who claims to represent the largest special interest in Slovenia: the pensioners. You’ve even agreed to 40+ million EUR additional financial obligation per annum even before you’ve even picked (let alone have had confirmed) a new finance minister. And you still believe you’ve freed yourself from undue influence?

Pushing Potočnik and other shop-worn faces

While we’re on the issue: Dušan Mramor is a relatively good pick for a finance minister. You could have done a lot worse. But you could have done much better, too. In fact, I fail to see why you couldn’t break the arm of the outgoing finance minister Uroš Čufer and persuade him to stay on. We know you can play hardball, we’ve seen it with the issue of EU commissioner post.

Further to that: Janez Potočnik? Seriously? I know the man is likeable and your promoting him probably falls within the pattern of you picking colleagues from Faculty of Law and Faculty of Social Sciences. But Potočnik held his EU post for two terms now. Ten years. And he wasn’t even elected to it. I’m sorry to be the one to bring it up, but as far as I remember, ALDE (the EU political group Potočnik belongs to) said prior to EU elections it will only nominate people who were on the ballot. Potočnik famously chickened out of leading an all-ALDE ballot in Slovenia. The dude is damaged goods. And he’s only further damaging himself by acting like a fucking prima-donna (»I’m in! I’m out! No, I’m in!«). And have you ever considered that maybe Juncker wouldn’t want Potočnik on his team?

To be honest, for a leader of a new political force you sure seem to be ending up with plenty of shop-worn names in your cabinet. It is as if you’ve spent all of your ammo on insignificant issues and are going to have to settle for a sub-optimal team of ministers.

The Youth Office and other pensioner related issues

But enough about that. You’ve got a job to do. And despite the fact that mine is not the only »open letter« you’ll be receiving these days, I dare say others are of more, well, stock variety. So, the labour unions wrote you a letter. Welfare state, labour rights, yaddayaddayadda. They do that every time. But let’s cut to the chase here. Ever since they torpedoed the law on menial work (and arguably from well before that) the labour unions are nothing but a pressure group of people looking for the most favourable retirement conditions possible.

I mean, sure, the labour force is taking the brunt of this crisis. But within the labour force, the young-and-educated by far worse of than anyone else. They are the people who will, by the nature of things, have to keep the economy afloat, make the money go round and raise that GDP. There simply is no other way. Most of these people have no union representation (although the unions claim otherwise) and – more importantly – they’ve zero »official« experience to make them eligible applicants for what little jobs fitting their profile there are available. I know that the latest draft of the coalition agreement uses all the correct buzzwords about youth employment, but at the same time you dismantled the Youth Office, the only institutional representation in the (broadly speaking) government young people had and drowned that particular office in the new »Trans-generational Cooperation Office« to be headed by a person from – the pensioners’ party? Dude, c’mon!

On the other hand, the industry is going on and on about their usual mantra: Workforce too expensive, taxes too high, leaving the country, bada bing, bada boom. Sure, the tax-mix is less than optimal and there’s a compeling case for tax-cap, but no matter how much you cut the wages or cut taxes it ain’t gonna solve the basic problem of Slovenian industry: it just ain’t competitive, mostly because on the whole it doesn’t produce enough added value. And that’s mostly because there isn’t enough innovation (to be more exact, not enough innovation gets from the laboratories to the production floor).

While we’re on the issue: What the fuck does »controlled privatisation« mean? It sounds something like »half-pregnancy«. I mean, you make it sound as if previous privatisations were uncontrolled. Sure, those that amounted to botched-bordering-on-illegal MBOs were uncontrolled. Those few state-owned companies, however, that were actually sold to the highest bidder, we were at pains to let go as if we were selling our only daughter into slavery. You said it yourself in your acceptance speech: we have mostly ourselves blame for this crisis. And no amount of rule of law or values or pride is going to help when the industry and the mind-set that runs it is still in 1980’s.

Ah, yes, values and the rule of law. You were pretty big on that in the past couple of months. But soon you’re going to have to take real positions on real issues. Because »equality and respect for all ethnical and social minorities« is not the correct answer to question of same-sex marriage. Just to give an example at random.

Do you see what I’m getting at? It’s been slightly more than a month since your sweeping election victory and already your ego is writing checks your body can’t cash.

You wrote in your draft coalition agreement conditions must be met to hold an exhaustive debate on all forms of families. But we already had that debate. More than once. And the views between supporters and detractors of same sex marriage and non-traditional forms of family are irreconcilable. This is what running a country is about. You form a policy, you form legislation, you pass it and then you enact it. Your British PM colleague was able to do it, you should be, too.

And what’s that about instituting a trial term for judges? That, my dear prime minister is a marked step backwards, since judges today are sworn into a permanent term immediately. You know very well that a) a permanent term is meant to insulate judges from political meddling and that b) the only party that really makes an issue of the trial/permanent term is Janez Janša’s SDS. We both know why.

But you don’t seem to be familiar with the concept of »slippery slope issue«. You see, instituting a trial term at the beginning of a judge’s career is akin to getting a foot in the door. Sure, it looks like a small concession to the party and its leader who made a career out of conspiracy theories. But in fact this is the biggest hurdle for them to clear. Once trial term in enacted, it is only a matter of political opportunism when the trial period gets its first extension. Say, from one to three years. And once you’re there, it’s no sweat of anyone’s back if gets extended from three to five years. And pretty soon, say within ten years, you’re left with a judiciary that is more incompetent, more corrupt and more politically influenced than we ever thought possible.

Which, of course brings us to the Curious Case of the Convict MP. The fact that under existing legislation Janez Janša gets to keep his MP seat despite serving a two-year prison sentence for corruption in the Patria Affair is a major embarrassment. But, you see, legislation is not only to be observed, it can also get passed. I believe your predecessor already started legislative procedure that would solve the conundrum. Don’t be afraid to follow this through. After all, this is not a legal but rather a political question. And a political solution to this must – as usual in a democracy – become law. For this is not really about Janša. He will only take whatever advantage he can in a given situation. And you already saw that he can be stopped dead in his track by political means.

I’m referring to his bid to become a member of of the committee for intelligence services oversight, with his party chum Branko »Gizmo« Grims serving as president. Which of course means Ivan would be de facto chair of the committee. But your parliamentary group chief Simona Kustec Lipicer put the entire committee on ice pending final decision on Janša’s MP status.

But as you are about to move into your new office in two weeks, Janša’s parliamentary issues will increasingly become Kustec Lipicer’s problem. You need to focus. Or, if we are to judge by the draft coalition agreement, refocus.

After all, it is the economy, stupid.

One thought on “Yet Another Letter to the Prime Minister”