Igor Lukšič, the deposed leader of the Social Democrats, used to begin his political science class semesters by stating that “form is content”. While that may be true to an extent (and it certainly is true in case of President Borut Pahor, in large part a political product of Lukšič’s), there comes a time when form and content are both radically different and equally intriguing. Case in point being the “Archive referendum”, to be held this Sunday. 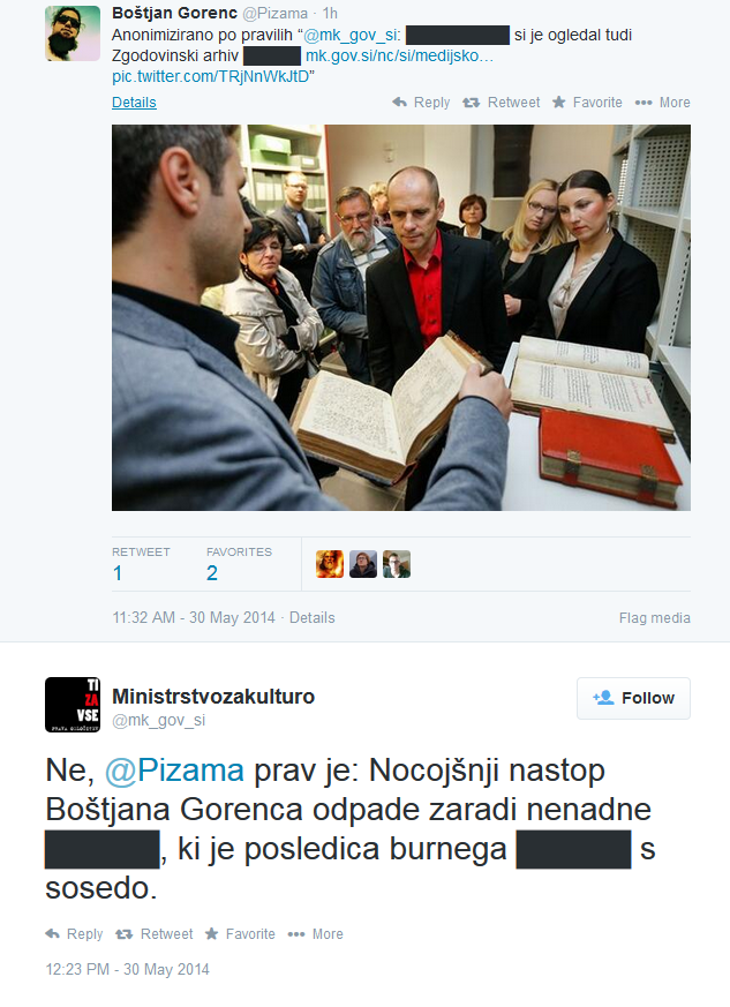 A Twitter exchange over archives’ redaction between Boštjan Gorenc Pižama and Ministry of Culture. Summed it up pretty nicely.

A referendum, I hear you ask? But didn’t we just go to the polls, voting for godknowswhom in godknowwhat capacity? Well, 24 percent of us did. And it was called the EU elections, silly. But this time, the game is a wee bit different. You see, the outgoing administration of Alenka Bratušek passed a new law governing safekeeping and access to state archives. The existing law, passed in 2006 by the Janša 1.0 administration was amended and expanded on by Ministry of culture headed by Uroš Grilc, which caused the SDS to go apeshit and muster 40.000 signatures required to hold a referendum, claiming the new law prevents access to archives of UDBa, Yugoslav communist secret police. Which, as far as The Party is concerned, only goes to show that communists still run this country, that Milan Kučan is behind all of it and that you should vote SDS in the next parliamentary elections, to be held a month from now. But first, the form.

The referendum this Sunday will be the first held under the new rules. In the old days a referendum was called when the petitioner first collected 2k signatures to initiate referendum proceedings in the first place. Clearing this hurdle, they needed 40k verified signatures (i.e. your signatures on a special form, verified by a clerk) to force the parliament to call a referendum on the issue. This was, arguably, the biggest obstacle. And when the actual vote came on, a simple majority was needed to either confirm or overturn the law in question. And with referendum turnout percentage traditionally being in the low thirties, this regularly brought about situations where fewer than 20% of the electorate got to decide a publicly relevant issue.

But now, the tables have turned. As of recent, petitioners must collect 40k verified signatures to begin with, while the referendum itself is subject to “quorum against”, meaning that to overturn a law passed by the parliament must see a) majority of all votes cast is against the law, provided that b) all votes cast against represent at least twenty percent of all eligible voters. Which, admittedly, sets the bar wee bit higher than before. Assuming a vote split down the middle, around forty percent turnout is needed to give the petitioners against the law a fighting chance. For example, the turnout at the 2012 presidential elections was just north of forty percent.

Point being, that unlike before, when it was oftentimes enough to merely call a referendum to derail a political process (and if the vote went your way, well, hip, hip, hooray and jolly good!), today the emphasis is much more on bringing out the vote. Which brings us from form to the content.

It seems that the crux of the matter are amendments of article 65 of the law which – according to the SDS, the petitioning party – allows for indiscriminate redaction of sensitive material, supposedly creating conditions for the government and the archive personnel (both of which are communist-controlled, obviously) to redact and remove any and all information which could shed light on UDBa and general communist mischief, the apex of which was, is and forever will be Milan Kučan. The ministry of culture, however, says that no such thing will be possible. Quite au contraire, they say, the new law prevents mishandling of the archives, allows for a broader access to more archives and only allows for redaction of personal circumstances, i.e. sexual preferences, religious beliefs, medical conditions and so on.

The SDS, whose vitriolic anti-communism is the glue that keeps this party together (and is especially strong with members who were ardent Commies right up to the end of Socialism) is of course milking this one for all it is worth and then some. Namely, if they are correct and the government is planning to shut down access to archives, it means no more playing around with the Xerox machine. And if they are wrong and the ministry of culture is correct and the new law means broader access to archives, well, the SDS gets fucked as well, since their fooling around with the archives will be exposed much more easily. Either way they lose.

It doesn’t help their case that their point men in this case are two gifted amateurs with little or no formal training in relevant scientific fields. Igor Omerza and Roman Leljak have been trawling the archives for some time now and churning out massive amounts of copy most of which was immediately picked up by the SDS. Case in point being disappearance of one Stjepan Crnogorac, a Croatian national who was allegedly kidnapped and killed by Slovenian SDV. The thing is that most of what Omerza (former Ljubljana deputy mayor) and Leljak (former Yugoslav Army intelligence officer who later did time for fraud) come up with is not independently verifiable. And when you find out that the Daring Duo has an unlimited pass to see the un-redacted archive originals and will continue to enjoy this privilege even if and when the law is passed it makes you wonder if what we’re seeing here is not some kind of jealous protection of “the ring”

But there are other levels at which this law simply doesn’t work for the petitioners and they’ve nothing to do with existing UDBa archives. Namely, the keen eye of the Good Doctor spotted a teeny-tiny little detail called “Article 50a” which – in a nutshell – states that selected archive material of parliamentary political parties is to be treated as a “privately owned archive”. Translation: political party archives fall under the purview of the new law, can not be messed with at will and must be granted access to under certain conditions.

Now, what if what we’re voting on Sunday is not really about UDBa archives being open or closed but rather a knee-jerk reaction of at least one political party to possibility of other people having a peek at their archives. It would not be the first time a red herring would have been employed in such a manner. Namely, in 2005, Janša 1.0 administration passed a new law on media which – among other things – provided for an extensive “right to reply”. Editors and journalists went apeshit, the left-wing opposition was screaming bloody murder but while half of the country was claiming government interference with the media, another and much more fundamental provision was overlooked: the new law dropped the provision banning ownership concentration of media. But since everyone was up in arms over a principle (one which ultimately didn’t matter a pair of fetid dingo’s kidneys as editors often simply ignored claims to right of reply), a massive change or rules took place under the radar.

Which is what we’re looking at here, in pengovsky’s opinion. The real fight is over the unmentionable. The SDS obviously will never admit it has a problem with granting access to its archives after clamoring for a free-for-all on state archives. The government, on the other hand, will never admit it has any interest in papers of any political party. Although granting access to their archives should be a given since parties are mostly funded by taxpayers’ money.