Yesterday Gregor Virant put his money where his mouth is and quit the ruling coalition, taking ministers Senko Pličanič (justice and public administration) and Janez Šušteršič (finance) with him. Virant himself also resigned as president of the parliament, effective Monday. Thus his party Citizens’ List entered the opposition and left Janez Janša with 43 votes in a 90 seat parliament, making his a minority government. 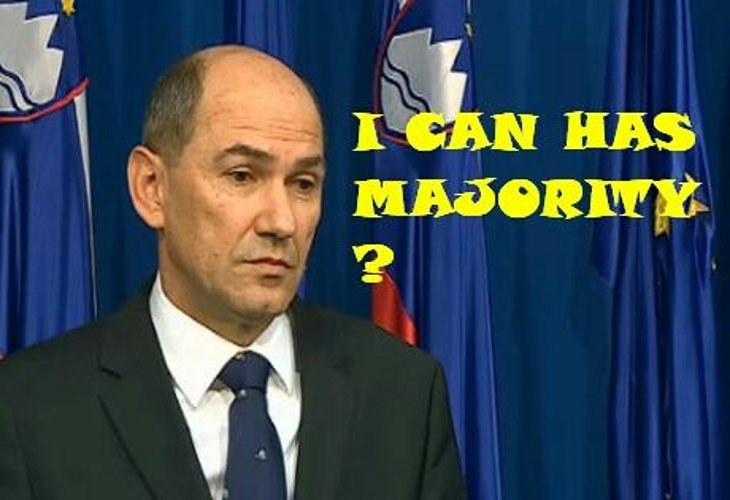 With this a turning point has been reached, especially since DeSUS of Karl Erjavec is apparently going to follow suit fairly soon and SLS of Radovan Žerjav is also making noises about jumping ship (albeit at a later date). This leaves Janša with unequivocal support only ChristDem NSi led by Ljudmila Novak and nowhere near at least theoretically operative government. In fact it is safe to say that Janez Janša’s downfall is a matter of weeks rather than months.

Things will of course not go smoothly. Breaking his silence for the first time since the anti-graft report which set in motion this chain of events was published, Janša today unleashed hell and accused Virant of partaking in a long-planned conspiracy to remove Janša from power. He also added he will not be resigning of his own accord and dared Virant and anyone who would follow in his steps to form a new majority and move for a no-confidence vote. Translation: Janša will fight tooth-and-nail to remain in power, if only in the form of a caretaker government.

And this is the crux of the matter. Janša accuses everyone and his brother, from the anti-graft commission onwards of destabilising the country. In fact, it is he who is the major source of instability. Coalitions crumble, reports get published, politicians resign. Sure, it’s time- and strength-consuming, but hardly uncommon in a democracy. What is uncommon is the notion that established tools of a (parliamentary) democracy should be sidelined in the name of “stability of the country”. Not surprisingly, this is very similar to what the Constitutional Court used as an excuse to ban referenda on bad bank and state sovereign holding, when it said that functioning of the country takes precedence over the right of the people decide these issues in a popular vote. It also shows Janša does not understand or – probably closer to the truth – doesn’t give a pair of fetid dingo’s kidneys about what the protest movement wants. But then again, neither do Virant, Erjavec or Žerjav. Let alone Igor Lukšič of SD or Alenka Bratušek, acting president of Zoran Janković‘s PS

In fact, it seems that right now the entire political master-class are hedging their bets. They’re playing an angle and they all have a lot to lose. First and foremost is Janša. His 30-odd minute rant followed by a brief Q&A on live television today showed just that. He was playing hard-ball which included trying to put a wedge between ministers Pličanič and Šušteršič on one side and Virant on the other. Indeed it would be quite a feat if both ministers switched sides. At the moment it seems unlikely but not impossible, especially since neither of them was elected to the parliament in the first place and is thus about to quit front-line politics. Also, Janša chided Virant for having the audacity to tell Janša what to do and said that it is unbecoming of a small parliamentary group to make demands on a large parliamentary group. In other words, everyone should know their station. Having said that, however, Janša did bring up the question of electoral system which – in addition to Virant – is supposedly the source of Slovenian troubles.

This shows that Janša is seriously considering the possibility of a snap poll and is trying to hi-jack the issue, again proposing a two-round majoritarian electoral system (which would actually spell disaster for Slovenia, but we’ll leave that for another time). But it would seem that someone talked some sense into Janša, since he did allow for other possibilities to be considered as well. And on a larger scale of things, the electoral system is a problem. It will not solve the current situation per se, but changing the voting system could address one of the basic complaints of the protest movement: the illegitimacy of the political system (note: not illegality, illegitimacy). Even more, this passage in Janša’s rant was the only thing which had any sort of a meaning, which means that he was trying to send a signal of some sort. However, what he conveniently forgot is that not only do (former) coalition partners demand he resign, the people want that too. And for a plethora of reasons, not just the anti-graft report.

Virant, Erjavec and Žerjav are also hedging their bets. A snap poll is not exactly what they want because they run the risk of being thrown out of the parliament. OK, so Virant won a couple of brownie points for having found his spine, but would be spent in an electoral campaign sooner than you can say “confidence vote”. Which is why he’d much rather see a new PM elected in the parliament than elections being held. Ditto for Karl Erjavec, who is locked in a intra-party leadership struggle which means that DeSUS walking out on Janša is as much a political move against Janša as it is a PR-manoeuvre to rally people in the party support within the party. Žerjav on the other hand is probably looking to sort out his succession (he’s quitting as party chief in March) and doesn’t want the party to campaign without a leader.

Predictably, Igor Lukšič wants early elections ASAP since public opinion polls put his party at the top while today Alenka Bratušek floated the idea of forming an interim government with a mandate to tackle specific projects including changes to the voting system and then hold elections in about a year’s time. Needless to say that PS is not doing particularly well in the polls right now.

But coming back to Janša: the only way he’s apparently ready to negotiate is with him continuing as PM. Should that not be possible, he already announced SDS will be returning to the opposition. And you can be sure that he will pull no punches when trying to shoot down anything and everything a potential new government would try to pass through the parliament. The problem is that neither the (former) coalition partners nor the protest movement see Janša as a legitimate player any more. But then again, as far as protest movement is concerned, every other political leader is struggling with its legitimacy as it his. Which is why also part of the reason they’ve ganged up on Janša.

Exactly a week ago, pengovsky wrote of four possible scenarios on how all of this can play out. As of today this boiled down to scenarios one and four. But despite everything he said today about other people being responsible for the situation, the primary responsibility lies with Janša. If he chooses to prolong the situation by clinging to his job (as he is likely to do) he will be indeed holding the entire country hostage to his political survival.

Which is why it is no surprise that the government today upped the ante in relations with Croatia which is to join the EU on 1 July. Janša’s Cabinet did not approve basic points of Slovenian brief to the ad-hoc court on Slovenian-Croatian border. Some say that happened because Janša wants to lay claim all the way to the Croatian town if Savudrija. Which would basically send the entire Arbitration Agreement negotiated under Pahor’s government down the drain.

Funny, how this reminds pengovsky of former Croatian PM Ivo Sanader who was looking to pick a fight with Slovenia but then surprised everyone by resigning only 14 days later and is now rotting jail. But that’s jus me being evil.