“Trade unions should have waited with protests until spring, when the weather will be warmer” – PM Janez Janša, late 2005

“Certain lessons of twenty years ago must be repeated and I expect we’ll see each other on city streets and squares” – Opposition leader Janez Janša, late 2009

“If I were your age again, I’d take the banned at least once a week and hold a protest in front of the parliament demanding implementation of fiscal rule” – PM Janez Janša, October 2012

“There is a background operation coordinating these protests which are timed to coincide with the new president taking his oath and aimed at weakening the coalition” – PM Janez Janša, December 2012 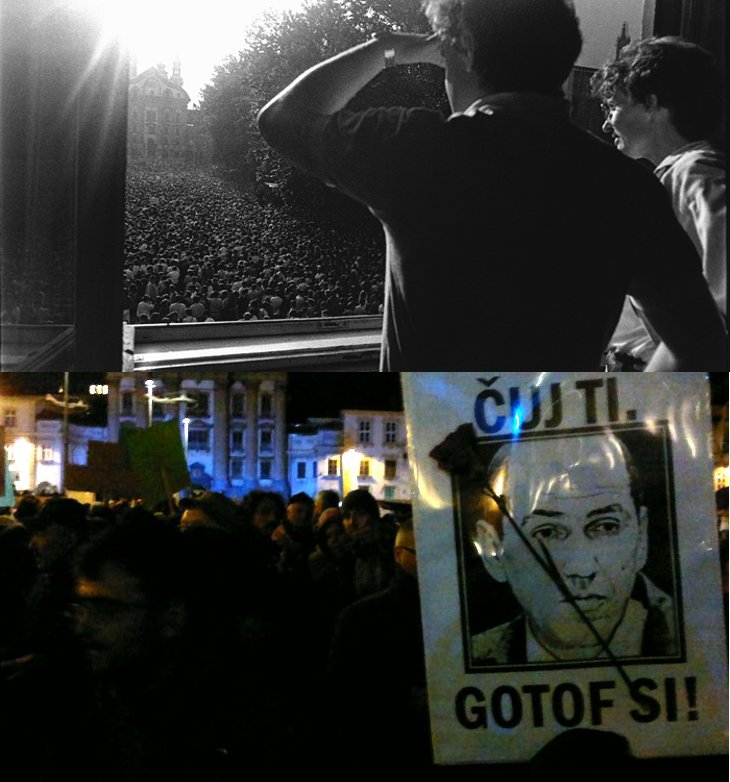 Kongresni trg in 1988 (top) and 2012 (below). Photos by Tone Stojko and pengovsky respectively

Twenty-four years ago, in 1988, tens of thousands of people swarmed Kongresni trg in Ljubljana supporting Janez Janša and three other people detained by the Yugoslav national army. Today, in 2012, tens of thousands of people are protesting against Janez Janša all over the country with the biggest rally so far planned for tomorrow, 21 December. Also known as The End Of The World.

Pengovsky said a couple of times that the political elite is scared. We’ve seen plenty of evidence for this in the past few days. PM Janša had a bad interview on state television where he (albeit slightly ill) was his usual paranoid self, blaming the opposition and the media for the protest wave. The difference this time around was that on occasion he was gasping for air, so to speak, which was a novelty. Interior minister Vinko Gorenak who survived a no-confidence vote on Tuesday, accused the opposition of trying to undermine the coalition (as if that was somehow illegal) by trying to place a wedge between SDS and DL (some 36 pages of signatures calling for now-nixed referendum on bad bank were “lost” last month, with ministry of interior, led by SDS’s Gorenak and the parliament led by DL’s Gregor Virant pointing fingers at each other).

Also, the swearing-in ceremony for the new president Borut Pahor was rescheduled. Originally planned for tomorrow, it will now be held on Saturday. Officially, this is a cost-cutting measure, unofficially, a security one. Today, ministers Senko Pličanič (justice) and Gorenak demanded that people who are organising the protests show themselves and register the event with the proper authorities. I guess they didn’t get Janša’s memo about the opposition and the media being behind protests. And finally, the hunt for “left wing extremists”, meant to “level out” the fact that neo-nazis are on the rise again in Slovenia, finally yielded results this evening, with the police reportedly confiscating Molotov cocktails and granite cubes in the Metelkova Mesto area in Ljubljana, where left-wing, alternative and similar groups gather for concerts and other events. The problem is that eye-witness reports claim the evidence was planted.

So, the party is on for tomorrow. The National Uprising, they call it. Rumours are flying around and the nervousness is in the air again. There’s talk of army personnel being drafted as reserve police force. Riot barricades are already deployed in Ljubljana and it only remains to be seen whether it will be a Big Bang or a Gnab Gib. But the ball is rolling and the protest movement is starting to voice its various demands ever more clearly.

It does seem as if the world is ending for some.