While the world watches in amazement at how the USA yet again managed to do the right thing at the right time and saw their Supreme Court uphold the Obamacare, this sorry little excuse for a country has seen a right thing done. But, sadly, others had to do it for us. 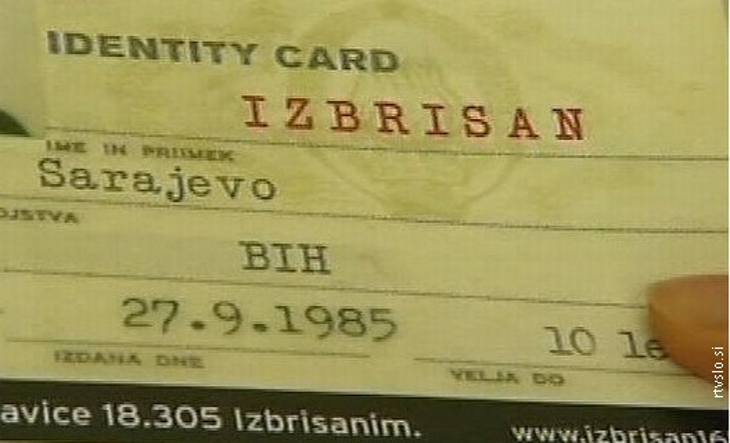 Namely, the Grand Chamber of the European Court of Human Rights (that is to say, on the appellate level) on Tuesday ruled in the case of Kurić et al. vs Slovenia. The eihgt plaintiffs were among the 25.000 Erased and the court ruled that six of them are entitled to EUR 20,000 compensation for “non-material damages”. Furthermore, the court instructed Slovenia to set up a compensation scheme for everyone who was unlawfully stricken from the “permanent resident database” in 1992 within a year lest the court will award damages for all remaining individuals. With this, twenty years almost to a day, a final chapter in what is arguably the single largest violation of human rights in the democratic history of this country is being written.

The damages awarded are symbolic at best. 20k euros may seem a lot, especially if received as a lump sum. But think of it this way. It took more than ten years (and numerous decisions by the Slovene constitutional court, most of which were simply ignored) for this country to recognise that “administrative removal” was legally and morally wrong. As the government of Tone Rop was nearing sunset, interior minister Rado Bohinc made a half-hearted attempt at solving the issue, but got nowhere, because he wanted to both have the cake (fix the status of the Erased) and eat it (keep face, minimize the number of people eligible and appease the right-wing). It didn’t work. The law in question was put to a referendum, where it was summarily struck down on the back of a fiercely xenophobic campaign. Little wonder, as it was an election year.

It took five or six more years for the government of Borut Pahor – specifically, interior minister Katarina Kresal – to really start righting the wrong. And she did. With plenty of help from her state secretary Goran Klemenčič (now head of the anti-corruption commission) and, ultimately, by the landmark decision of the constitutional court to refuse another referendum on the issue in 2010.

And today, after twenty years of being denied “official existence”, not being able to get a work permit, be eligible for health- and pension-insurance, these people (for we are talking about human beings) are awarded 20,000 euros. Thousand euros per year. Or about as much as your average MP makes in a week. So yes, the damages are purely symbolic.

That, however, did not prevent most of the right wing to cry murder. Even more: at first they denied the issue, then claimed that these people were “aggressors, members and sympathisers of the JNA who were erased and serve them right” (rings a bell, no) and finally, when the reality of what had been done to these people was too ominous to ignore, they wanted to pre-emptively prevent them being liable for compensation. Again, a familiar tactic.

Which is why it came as no surprise (but was still appalling to watch) as PM Janez Janša yesterday said this country does not have the funds to compensate the Erased. It is absolutely degrading and distasteful to think of human rights in terms of whether or not one can afford them. If we can not, or – even worse – if human rights are extended only to those who can afford them, then something really is rotten in the state of Slovenia. For no country is worthy of its name if it can not come to (financial) terms with the fact that human rights of a specific group of individuals were systematically trampled on for two decades all the while the country in question claimed to respect and uphold the basic principle of respecting fellow man.

True, there are many cases of people having to go through living hell even today. Workers whose social security was not being paid by the companies they work(ed) for. People, who have to wait ages to have their cases ruled upon or even heard at a court of law. Roma people. Single parents. The LGBT community. You name them. But the case of the Erased stands out due to the systematic approach this country took when making them a “non-entity” and by the collective (governmental) denial of the act happening in the first place.

On the other hand, there is a special para-state fund this country has which has a stake in many a state-owned company and was established specifically with the aim of making money to compensate victims of other persecutions, be it by the Socialist regime, civilian victims or war violence or those whose property was nationalised after WWII whose claims to compensation the state in principle recognised to be valid.

PM Janša said that he has no idea how Slovenia will pay for the damages as it hasn’t got enough money to cover its basic needs. Well, here’s a newsflash. Human rights are a basic need of people living in a democratic society. Simple as that. Otherwise we might as well close the shop and call it quits.

One thought on “The Erased: Either Pay Up Or Close The Shop”