Prime Minister Janez Janša submitted his list of ministerial appointments for parliament approval Friday last and the first hearings were held Tuesday, with the second batch following today, with the government expected to be sworn in tomorrow. So let’s look at who these men and woman actually are (in order of appearance): 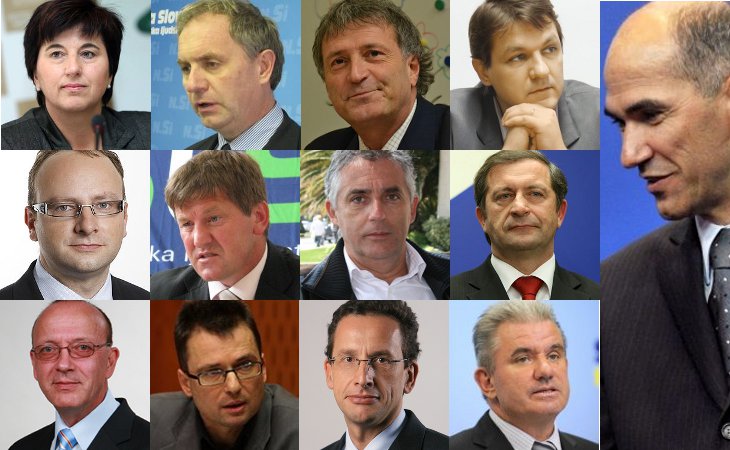 Ljudmila Novak (NSi) – Leader of the Christian democratic party Nova Slovenija and the only woman in Janša’s administration is set to become a minister without portfolio, tasked with keeping relations with Slovenian diaspora. The single remaining “ministry-at-large” caused quite a stir. It was created by the previous Janša administration and was tasked primarily to keep tabs on the Slovenian diaspora, both immediately across the border as well as around the world.

Aleš Hojs (NSi) – Minister of defence. Last seen as member of the board of DARS, the Slovene motorway company and a relatively high-profile party member. No-one has any clue as to why exactly he gets to oversee the Slovenian Army, but since qualified defence ministers were few and far between in this country and the armed forces are one of PM Janša’s pet peeves, it can only be assumed he will take suggestions on how to run the ministry from the very top. The key to understanding of his exact role in the office will be whom he picks or is told to pick as his state secretary (the number two person in the ministry).

Senko Pličanič (DLGV) – Minister of justice and public administration. One of the merged ministries, this will be one hell of a portfolio to run. He will be directly responsible for negotiations with public sector unions and those can be a bitch to deal with, as the outgoing government of Borut Pahor can tell you with some authority. Public administration was Gregor Virant‘s portfolio in the first Janša government and it was thought that Virant himself would take the post, quit the position of the president of the parliament and let Karl Erjavec of DeSUS take it. But apparently Virant grew cozy in that chair very quick and made Erjavec take another prestigious position.

Janez Šušteršič (DLGV) – Minister of finance. Arguably the mother of all portfolios and the most difficult right now. Also a sure-fire way for DLGV to sink even lower in public opinion polls (if that is at all possible, since they are already scoring on the low side of single digits). Šušteršič aims to cut up to 800 million euro of budget expenses in the first year alone. Since that comprises about 9% of the entire budget, shit is bound to hit the fan really soon.

Radovan Žerjav (SLS) – Minister of economy. Again, no clue as to why exactly he gets to run this particular portfolio, since he is a chemist by trade and a politician by vocation, while the economy in this country is more or less in deep shit. Even more, he was the principal sponsor of a law which prevents people who held top positions in a company that went out of business to start a new company within ten years. As with every other coalition party leader, this particular nomination seems to be more a matter of prestige than actual competence.

Tomaž Gantar (DeSUS) – Minister of health. Former mayor of Izola municipality and former head of Izola hospital should generally be on top of things. Hopefully, he will work to improve the reform of the health system which was drafted by his predecessor Dorijan Marušič and will not go back to square one.

Karl Viktor Erjavec (DeSUS) – Minister of foreign affairs. Ah yes, to Viktor go the spoils. Failing to secure the comfy position of the parliament president, leader of DeSUS went for the next best thing. He will now become the diplomatic face of Slovenia. And just when we thought that Dimitrij Rupel is the worst that can happen to a country’s foreign policy. Karl Erjavec has zero mileage in the field. OK, so he did go to NATO and EU meetings, but seriously… As foreign minister he is expected to be proactive and have a general idea of this country’s positions long before anyone asks us our opinion. The European deck of cards is being reshuffled and it will take a master poker player to bluff a country’s way out of this one. With Viktor as the foreign affairs boss, this looks highly unlikely. But then again, he can crack a joke like no other man can. Surely that must be worth something….

Vinko Gorenak (SDS) – Internal affairs. A commanding officer of a police station way back in socialist times (today that would probably translate into senior member of security forces of a totalitarian regime), he knows his way around police and internal affairs. His problem is the fact that he also gets to exert partial control over state prosecution, which was transferred from justice to internal affairs. With Janez Janša still in court over Patria affair, it’s way too close to comfort to have a senior SDS member be able to, say, launch a special investigation into the prosecutor who is trying to get Janša convicted. If you catch my drift…

Zvonko Černač (SDS) – Minister of infrastructure and spatial planning. Seems to be close to Janša lately and has jumped in as his boss’ chauffeur on occasion. Other than having some mediocre experience in the municipality of Postojna, it is a mystery (wrapped inside a riddle, hidden in an enigma) what exactly makes Černač so special as to be awarded the newly crafted infrastructure ministry which will arguably be crucial in any and all attempts to kick-start the economy (if that is at all possible, mind you). Well, maybe he’ll be just there to make sure the right folks get government contracts. Or maybe he’ll surprise us all and actually do something. He could, for example, go about making plans for upgrading Slovenian railway system.

Žiga Turk (SDS) – Minister for education, science, culture and sport. Well, the Ljubljana city councilman (he will vacate the post tomorrow as he is sworn in as minister) has his hands full. While he was busy going over his slides in a parliamentary hearing, couple of hundred of artists and culture-related people were busy decrying merging of culture portfolio with all the other (these were previously three separate ministries) and even burned a contra-bass as a sign of protest (in case you don’t get it: the message is we rather do it ourselves than let you enjoy it). It is ironic that demotion of cultural portfolio to the level of a state secretary brought together people who would usually rather cross a busy street than meet each other on the pavement. Culture is sacred for many a Slovenian (after all, our cultural identity was formed long before we even thought of calling ourselves a nation) and rather than just being a budget item, a lot of people took this a symbolic gesture of anti-patriotism by a coalition which for all intents and purposes draws heavily on patriotic feelings. It is therefore little wonder that the minister-to-be was awaited by protesters and booed to the point of being called “a stink” by a heckler. Which, for the record, was totally uncalled for, below the belt and utterly undeserved. Protesting and marching is one thing, calling names quite another.

And finally, Andrej Vizjak (SDS) as the new minister for labour, family and social affairs. Minister of economy in the first Janša administration apparently has some background in the field so it is expected that he will not be a complete failure, although it should be ridiculously fun to watch how he tackles unemployment while finance minister Šušteršič is shaving 800 million of the budget most of which goes to Vizjak’s portofolio as it is.

At any rate, these are all the king’s men. Nobody was really impressed by the list and even Janša himself said that this is the best possible team under the circumstances. But the trick is that this “best possible team” will have to produce the “best result ever” regardless of the circumstances, lest it go down in history as “the team that couldn’t”. If Pahor’s government way fighting an up-hill battle especially in economic policy, Janša’s ministers will be forced to climb vertically. Well, all except one. It is clear that – once again – Karl Erjavec already came out on top. Question is, will he stay there or is this just the beginning of a quick and uncontrolled descent…

3 thoughts on “To Viktor Go The Spoils”