So, more polls, and a lot of people are probably none too happy about it. Dnevnik published a Ninamedia poll which showed the leading three parties going up, up and away, while the rest of the gang are basically eating their dust, with notable exceptions being SD and DeSUS, both of which are sort of hanging in there.

But don’t take the champagne out of the fridge just yet. Rather than calling the race which has not yet begun, there are a few points that must be made lest they be lost in the general chatter of the election fever.

Again, you can see how Zoran Jankovič’s and Gregor Virant‘s polls are all over the place. Leaders of the three leading parties have recently appeared on Pogledi Slovenije, a high-octane TV programme which gets its ratings from the conflict it aims to produce among the participants. And lo-behold! they immediately gain plenty of ground. This supports the notion pengovsky expressed some time ago, namely that especially Janković’s and Virant’s polls are media-exposure-dependant. This might look like a truism (since everyone’s polls are to an extent dependant on the media), but comparing the three top contenders, we can see that Janša and his SDS have a fall-back line at about 18 or 19 percent, which consists of their hardcore voters and the recently launched platform, whereas Jay-Z and Virant have only their media exposure. Take that away and they’re toast. At the very least Janković gets a fair amount of press-time by the virtue of being mayor of the capital, whereas Virant has abso-fucking-lutely no plan B whatsoever.

But saying that the numbers are inflated because of the media hubbub only gets you so far. The number are there and unless the competition does something about it, they will stay there. OK, so media tricks get real old real fast, but both Jay Z and Virant are smart enough to time their media ploys correctly and gain maximum output. Ditto for Janša. Which means that unless someone hijacks the debate and does it soon, things could go on like this until elections and by that time it won’t matter how the top dogs got there.

Apart from the top three parties only SD and DeSUS are hitting above the 4% threshold, with SLS hovering around three percent. But in the longtail, interesting things are happening. SLS, Zares, LDS and TRS are out in the field, operating almost below radar and putting their network to good use. Town-hall meetings, round tables and topical discussions are being held all around the country. As you can see below, the effect is still to be seen, but effort is being made. 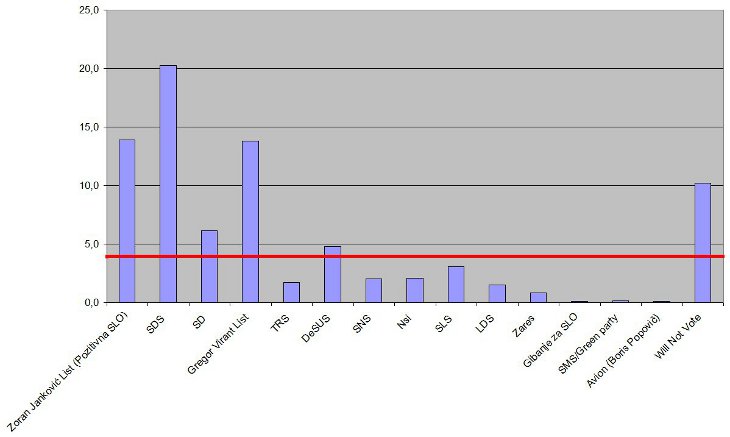 A lot of things can happen, but the more time passes, the more things tend to get fixed in the public opinion. So the parties below the threshold will have to be quick on their feet to produce a tangible result. Also, they will have to decide whether they will try to chip off votes from the (currently) big three parties or will they fight their immediate competition (most likely SD and DeSUS) and try to win over their electorate. There are pros and cons to either tactic and both can backfire at any time.

Note: Data is compiled from different polls with different sets of questions and different samples, so it is not directly comparable from a scientific point of view. Data available as .xls file

4 thoughts on “Slovenia Elections: Up, Up and Away”