After the initial upset in polls, when Ljubljana mayor Zoran Janković shot to the top in public, a series of public opinion polls were conducted which seem to confirm what the initial heat around Jay-Z and Gregor Virant is dissipating and that the hubbub was more due to their overall media exposure than to a permanent shift in voters’ preference.

First, a couple of disclaimers. Although the graph looks like it represents a significant span of time, do check the dates. Delo poll aside all were published (and by extension – conducted) in a very short time span and are therefore of limited value. On the whole, however, a few trends are starting to emerge.

First of all, it is now clear that the main contenders in this election campaign are Positive Slovenia (PS) of Zoran Janković, Citizens’ List (DLGV) of Gregor Virant and Slovene Democratic Party of Janez Janša with the latter two getting the most of the vote at this time. In fact, the pundits are still all over the question of whether Janša/Virant split is legit or are they faking it. However, when one takes a look at the polls it becomes clear that the question is beside the point, because Virant is at the moment in a position of a king-maker. He can choose to support Janša, but given enough encouragement (i.e.: continuous attacks by the SDS) he can opt to support the left and call even more shots.

Secondly, no matter the poll, Janša’s result is more or less stable, hovering around 19 percent. This is far (and I mean far) below his declared intention to win the majority single-handedly but he still is in the top spot. On the other hand Virant’s polls are all over the place, like a cork in the water. This goes for Jay-Z as well, only slightly less so, because he is consistently scoring lower than in the initial poll. This shows that both Virant and Janković are tapping into the swing vote, which – as many a politician will tell you – is a fickle lady. And swing time is here.

Thirdly. The nominally ruling Social Democrats of PM Borut Pahor are in deep shit. With their best showing in the polls available not exceeding 11 percent they are taking a hell of a beating. Ditto for Zares of Gregor Golobič and LDS of Katarina Kresal, which are scoring painfully low, both of them hovering around 1 to 1,5 percent, way below the 4% treshold. DeSUS of Karl Erjavec and Slovene People’s Party (SLS) of Radovan Žerjav are in a slightly better position, dancing just around the 4% mark, with everyone else, Zmago Jelinčič‘s nationalists and Ljudmila Novak‘s Christian democratic Nova Slovenija well below watershed. The same goes for every other kid on the block, including the recently announced Avion party (yes, “avion” as in “airplane”) by mayor of Koper Boris Popović. 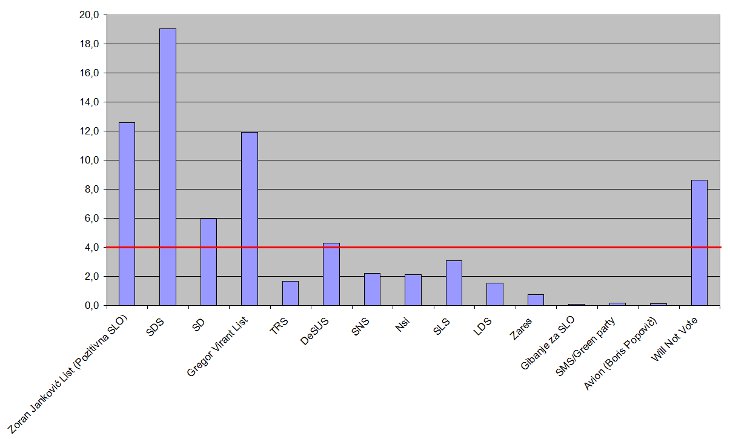 Again, these polls are not directly comparable and for two reasons: they each use a different sample and different set of questions. Also, they were conducted too close to each other to give any sort of clear indication of what is going on. But as shown in the above chart and at the risk of oversimplification, the way things stand now, five parties look like they will make the cut: SDS, Citizens’ List, Positive Slovenia, Social Democrats and DeSUS.

Things can still go either way and pengovsky believes it is too soon to write anyone off, especially those established parties which score less than 4%. The logic is realitvely simple. With their network on the ground, in theory they should be able to bring out enough votes to kick them above the threshold. But they’ll have to put their backs into it. Also, other than the initial mud-slinging, we’re still lacking a definite campaign issue. This especially goes in favour of Janković and Virant, who can as a result sell themselves and their trademarks rather than specific policies.