Pengovsky slacked on blogging yet again this week. Not that there’s no shit to report (this is where David Suchet goes: “Au contraire, mon ami!”) but there’ll be plenty of time to do that. However, it is only fair and just that some content be put between meat and tits and as far as opportunities go, you could do worse than Thursday’s debate betwixt the post-lacanian philosopher Slavoj Å½iÅ¾ek and leader of Zares Gregor GolobiÄ. 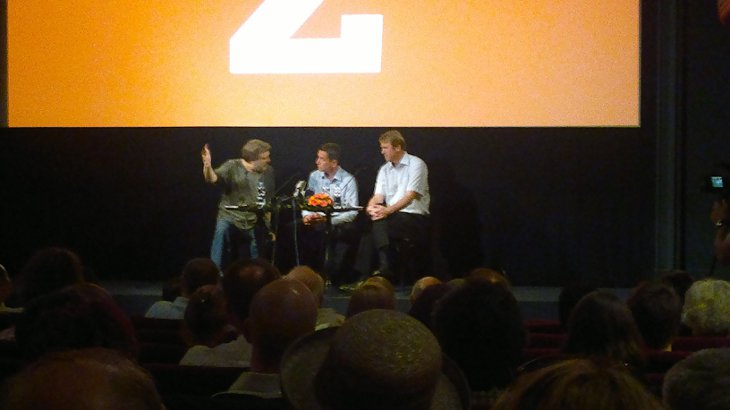 This post is not really a summary of the event. It is, rather, a series of thoughts that pengovsky would have uttered out loud were there a Q&A session. Luckily, however, there wasn’t one which means you, my dear readership, get to bear the full brunt of the storm, the only silver lining being that although moderator Stojan Pelko (until recently No. 2 man at the ministry of Culture) kept the debate going for a good two hours, pengovsky wasn’t taking notes for most of the time so whatever thoughts I may have had on several issues, they are now long gone.

That the debate took place on 14 July is, of course, no coincidence. Å½iÅ¾ek noted that revolutions (or any other social and/or political upheaval for that matter) can only be thought in hindsight and that the mother of all revolutions prevailed as late as two hundred years after it had started (in 1989) only to be defeated utterly and completely in the following twenty years. Bizarrely so, this is exactly the amount of time it took the 20th century to go from one revolution (or clusterfuck, depending on your point of view) to another. Doubly so for Slovenia, go Å½iÅ¾ek and GolobiÄ.

However, there’s a catch, sayeth yours truly. Until the 1988-1991 period of formation of Slovenia, revolutions tended to follow the out-with-the-old-in-with-the-new approach. But the 1988-1991 revolution (because in hindsight(!) that is exactly what it was) was performed by more or less the same group of people who partook in the 1968-72 social and student unrest in Slovenia. OK, give or take a few, but in general the statement stands. Could it be, that a revolution was “stolen”? Performed by people who had already had their go?

On one hand it is kind of hard to just say that, especially because it ended all-right. But on the other hand (and this connects to the next issue), there is this nagging feeling that 1989 was just a continuation of 1968. And that in fact it was not just a Slovenian version of the “European spring of nations” but rather a culmination of a much longer process which in fact took everyone (including those who would end up on top) slightly by surprise.

Secondly, both GolobiÄ and Å½iÅ¾ek were extremely harsh in their critique of capitalism. How can it be that the problems of capitalism are being solved by the very tools which caused the problems in the first place? Indeed, GolobiÄ warned that Europe is being slowly but surely disassembled and if the trend continues, we will be lucky to escape another round of bloodshed this continent had seen way too much in its turbulent history. In this respect GolobiÄ went after the recently published platform of Janez JanÅ¡a‘s SDS calling it the same old neoliberal nonsense they fed this country during their stint in power. In fact, the platform as it stands now, is anything but neoliberal. It is a handbook of economic alchemy which would on one hand lower taxes, increase public investment and decrease budget deficit, whereas on the other hand aims to introduce (by amending the constitution, no less!) a thoroughly communist concept of ownership being both right and obligation with everyone contributing to the common good according to their ability. Sounds familiar? Thought so…

In short, rather than taking us down the neoliberal road once again (which is what GolobiÄ fears) SDS’ economic platform will – if implemented – destroy what little potential for economic recovery this country has regained in the past couple of years. Thus, GolobiÄ is wrong. We shouldn’t be afraid of neoliberals. It’s amateurs we should fear.

And while we’re on the subject of neoliberals: pengovsky thinks that in this case GolobiÄ somehow chose to ignore the big picture. Yes, solving crisis of capitalism with even more capitalism will inevitably lead to disaster. That this disaster is most likely to take the form of a more or less global conflict (I won’t use the word “world war” but feel free to think it) is almost a given, especially if one looks back at the history of the 20th century. In this respect GolobiÄ is dead right. But criticising capitalism at this point is like kicking a dead horse. The moment for radical changes in world economic order was missed sometime in the second part of 2009. The situation we have today is not the result of capitalism in pre-crisis neoliberal form raising it head, but it is because no sensible alternative was provided. This seems a bit of a self-fulfilling prophecy, because people who were in position to provide an alternative did not do so because their main impetus was to get back to the “business as usual”, although there is no longer anything usual about any business. But given that the world is so interwoven economically there is probably no way to just drop everything and start afresh. We might come to that. In fact, GolobiÄ is correct when saying that everything that was done to solve the crisis just deepened it further and that bloodshed is almost unavoidable. But asking to – well – cut to the chase and getting it over with is perhaps asking a bit too much.

So, what do we need? Naively, pengovsky proposes a Slovenian “space programme”. Not in the “sending-a-man-to-the-moon-and-returning-him-safely-to-the-earth” kind of way, but a far-reaching programme or initiative that would have positive side-effects which may in the long run prove to be even more crucial than the project itself. One thing that comes to mind is the introduction of universal basic income, which although his party toyed with it at first, GolobiÄ dismissed as a noble but unattainable idea in a recent interview. That may be so (although some serious calculations would be in order), but pengovsky is willing to bet that just by initiating procedures to completely revamp the system of social security, a lot of positive stuff could happen. What is needed here is some outside-of-the-box thinking, just for the argument’s sake if nothing else.

Universal basic income is of course an utterly anti-market idea. Neolibs tend to have a fit whenever they see something being state-ordained. That the state would cash out equally to everyone is of course their worst nightmare. That the state rarely becomes leaner after neolibs tinker with it, is something we’ll conveniently neglect. But as we said, while JanÅ¡a may tinker with neoliberal ideas, Milton Friedman and the faithful would probably scoff at JanÅ¡a’s economic legacy and die of shame reading his economic plans. However, all the buzzwords are there. The lean state. The tax cuts. The pro-business environment. And the homeland. In fact, Janez JanÅ¡a summed it all up in a recent reply to the good doctor on Twitter, where he said that homleand is priceless and doesn’t collect taxes. State is a legal framework, homeland is the content. And concludes that Å½iÅ¾ek is mixing apples and oranges.

Making a fool of everyone present

What was it Å½iÅ¾ek said that upset JanÅ¡a so much? Well, it was in fact one of his usual rhetorical bravuras which sent everyone into a frenzy. Namely, the pop philosopher said that he fears JanÅ¡a’s notion of more homeland and that this country needs more state and less homeland. This was predictably followed by a hefty round of applause. Similarly, at the very beginning Å½iÅ¾ek countered those who label GolobiÄ smart and corrupt, saying that he always thought of Zares leader as an honest but slightly stupid person (cue laughter). Sure enough, these and other soundbites had the intended effect: headlines were full of them the next day and Å½iÅ¾ek was again lauded as the master of wit. However, what most of those present failed to see was that these rhetorical twists were only a manifestation of what GolobiÄ said a bit later on, that the society today has no opinion leader and that on the whole people tend to follow rather than seek new paths. As if he had read the infamous Despair.com poster which says that “left to themselves, people tend to imitate one another”.

Å½iÅ¾ek again showed how easy it is to take control of the masses, no matter if the mass is comprised of people who thing of themselves as critically minded individuals. In his most excellent book Generali brez kape (Generals Without Caps) jouralist Ali Å½erdin recounts how Å½iÅ¾ek did something similar twenty-odd years ago when Janez JanÅ¡a (then still an obscure scribe for Mladina magazine) was imprisoned in 1988, sparking popular protests which became focal points for all sorts of grievances Slovenes had against socialism and which started a chain of events which ended with Slovenia declaring independence three years later. Namely, Å½iÅ¾ek was speaking at a gathering of the Human Rights Committee and said that the Communist Party was always using catch-phrases like “the time for words is past, now it’s time for action!” and that in his view showed that the Party had a legitimacy problem which it attempted to cover up by its hyperactivity at that time. So, Å½iÅ¾ek proposed that the Committee hit the Party where it hurt and stated that “the time for action is past, now it’s time for words!”. Those present erupted in cheers and applause. But then Å½iÅ¾ek delivered the final blow: “I must say I’m sort of embarrassed that you feel for a cheap trick like that” he said. Apparently many a face turned red.

Twenty years later we still have the same problem. Too many people fall for too many cheap tricks like that way too soon. And this, in pengovsky’s view is the ultimate lesson of Thursday’s Å½iÅ¾ek vs. GolobiÄ. Not whether leader of Zares is a credible person. Not whether capitalism is in it’s dying moments. Not even whether there will be blood. The lesson is that throughout the last twenty years the people of this country still count on someone else to take the hard decision and then criticise them for it from a comfortable distance, all the while falling for the same trick over and over again, learning practically nothing. Increasingly, the feeling is as if we’re stuck in 1991.

2 thoughts on “Slavoj Å½iÅ¾ek vs. Gregor GolobiÄ: 20 Years After”