The saga continues. After Karl Erjavec and his DeSUS quit the coalition and the government of Borut Pahor, the ball kept rolling yesterday and today. With the notable exception of Pahor’s Social Democrats, LDS of Katarina Kresal and Zmago Jelinčič‘s nationalists, every major political force in the country called for early elections to be held as soon as possible. Even President of the Republic Danilo Türk spoke to that effect this morning and – what was most shocking to the uninitiated – Gregor Golobič of Zares said that he will resign his post as minister of higher education, science and technology and return to the parliament. And SDS of Janez Janša still maintains that all it takes to hold early elections is a deal between SDS and SD. So, let’s take it one thing at the time. 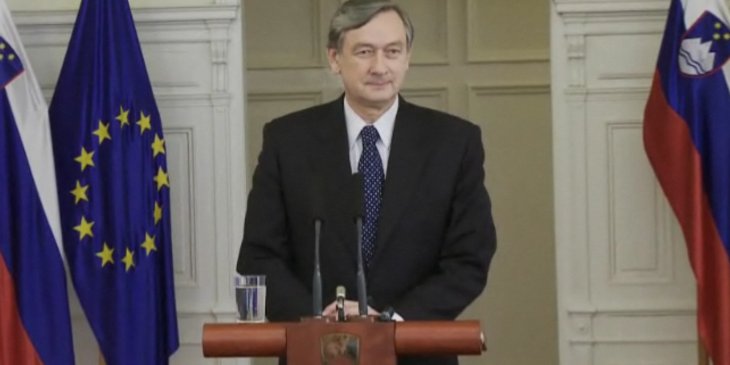 The Prez with his two cents (source: Office of the President)

The Prez held a press conference where he “commented on recent developments in the country”, which is polit-speak of saying that he chipped in his two cents. His bottom line was that a) the coalition must throw everything is still has behind the pension reform and that b) he’d be quick to call early elections had he the power to do so.

A slap on the wrist for The Prez

As most of you know, The Prez has very limited powers and even him saying what would be the best course of action while we still have a fully empowered government means pushing the envelope of acceptable. Toying with the (admittedly hypothetical) scenario of dissolving the parliament and calling snap elections, knowing full well (and saying as much) that he can not do that, is bordering on exceeding his powers. I know things look bad, but apart from the fact that a junior coalition party left the government and that reforms are not popular, there is not a whole lot that is wrong at the moment. Yes, we can see the contours of a political crisis shaping but we’re no there yet. And until we get to that point the day-to-day politics should be left to the coalition and the opposition. The Prez went out on a limb needlessly.

Secondly, the idea of calling snap (or early) elections is floating around for some time now. Indeed, until DeSUS quit the government, a sort of political paralysis seemed to have crept into Slovene politics as no one wanted to make the first move. But now the ball has dropped, the paralysis is gone and suddenly things are moving ahead with lightning speed. But getting to early elections is mighty difficult. It’s not a bug, it’s a feature. The Prez can not call them and even saying what he would do (or contemplate doing) had he broader powers means walking on thin constitutional ice.

A slap in the face for Zares MP

While it may be constitutionally dubious for the president to call for early elections, it is perfectly OK for leader of the coalition party to do so. Which is what Gregor Golobič of Zares is apparently attempting to achieve. He said in no unclear terms that the main goal right now should be the referendum on the pension reform (which will be held together with referendums on black market labour and access to secret archives on 5 June) and that a new government should be appointed sans leaders of the coalition. Since neither PM Pahor nor Katarina Kresal were amused by the idea, Golobič decided to go for broke and announced that he will tender his resignation as minister some time between now and 5 June and that elections could be held as soon as September this year.

Despite the fact that it looks suspiciously similar to president Türk’s idea, Golobič’s move is actually a small political masterpiece which a) keeps the momentum of actually forcing early elections (more on that later on) and b) solves a nasty problem in Golobič’s own party, the problem which goes by the name of Cveta Zalokar Oražem. This MP for Zares who only gained her seat after Golobič was appointed minister and who used to be a member first of Social Democrats and then of LDS (and was a long time mayor of Domžale near Ljubljana) has long been critical of her president and stabbed him in the back quite a few times, most notably during the Ultra Affair, where she was careful to get as much media attention as possible criticising Golobič and doubting his leadership abilities.

Well, by announcing his resignation, Golobič made sure himself and Zares continue to be among those who dictate the tempo of the game and will have gotten rid of Zalokar Oražem, who will thus lose her MP status and cease to be a major problem within the party.

A few fun facts before everyone gets carried away

But before everyone goes ga-ga with the possibility of breaking new political and constitutional ground in Slovenia, here are a few facts to consider:

-Slovene political system is so stable it borders on rigid. Which is precisely why everyone is getting so nervous these days. The government, albeit a minority one, is still fully functional. Political crisis is possible, but still some time away. It’s just that we’re not used to these kinds of situations.

-Because of this rigidity of the system, early elections are practically impossible. The only way to have them under present constitution is a) for the government to resign and b) for the parliament to fail to elect a new government in three consecutive votes. The parliament can not simply dissolve itself by a majority vote or something like that.

-To ensure early elections by means of either empowering the president to call them or enabling the parliament to dissolve itself would require a change in constitution. To do that, a special procedure must be initiated, requiring a two-thirds majority twice over, which is extremely unlikely the way things stand now.

So, the only viable option to call early elections remains resignation of PM Borut Pahor and it seems Gregor Golobič is trying to force him to do exactly that. The PM does not enthuse over that, but things might change come June 5 and the triple referendum.

5 thoughts on “The Prez Has Ideas As Golobič Eyes Resignation. Plus A Few Fun Facts About Early Elections.”