The final tally of Sunday referendum on the law on RTVSLO was disastrous, to say the least. The law was nixed with 72.64 percent votes against and only 27.36 percent in favour, with a criminally low voter turnout. The counter of voters attending the referendum stopped at 250 079 or only 14.56 percent. The good doctor rightly called it a fiasco. While the inevitable battle for interpretation of results ensued immediately, there are things that should not be overlooked. 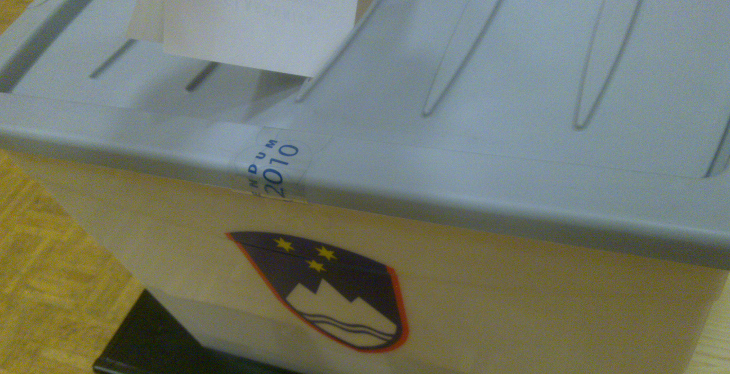 Bottom line is that the law was quashed, meaning that the existing law on RTVSLO, crafted by SDS’ very own chief bulldog Branko Grims remains in effect. The coalition lost this round decisively and without reprieve. Well, without immediate reprieve, at least. Legislation stipulates that following a referendum, no change to a particular law can be attempted for a year. With PM Pahor’s government popularity points hitting the low end of the twenties, the defeat only reiterates what the opinion polls say. Furthermore, this is also major policy defeat for the coalition which put revamping of the law and limiting political influence over the institution high on its agenda.

Rejection of the law threatens to open a Pandora’s box of pressure being brought to bear on RTVSLO once again. The existing law allows for it and the referendum result now gives the ruling coalition almost a carte blanche to shape the institution according to its own image, just as Janša’s government did after the 2007 referendum on the same issue (when the current law was confirmed). An overwhelming majority of members of Programming and Supervisory boards will still be appointed by the parliamentary majority. This means it is up to good will of politicians to decide whether board members will be people who know what TV and radio are, or people who will more or less faithfully follow party directives. And being dependant on good will of politicians is never a good thing. RTVSLO thus remains a state media and is eons away from becoming public.

However. While resounding, the defeat is not catastrophe for the coalition. Immediately after declaring victory, Janez Janša and his SDS called for Minister of Culture Majda Širca to resign. This was later (predictably) expanded to a claim that the entire government led by Borut Pahor should resign, since they are wasting time on trivial matters, such as the new law. Following government resignation, sayeth the SDS, early election should be called.

Pengovsky will not go again over why it is next to impossible to call early elections in Slovenia. But constant calls for early elections are becoming really old really fast and only prove that SDS in fact has no serious alternative on how to handle the general situation Slovenia is in right now other than the fact that it is them who should be in power.

Which brings to the next issue at hand. Despite clinching a victory, the SDS can be far from happy. Having thrown shitload of mud in the general direction of Pahor’s government and in the specific direction of minister Širca, despite trying hard to galvanise the vote, less than 15 percent of people showed up at the voting booth and of that less than three quarters voted in line with SDS’ position (a no vote). Even if we assume that everyone who voted against is a SDS supporter (which is not the case), this means that the die-hard base of Janša’s party ammounts to less than 12 percent of Slovene voters. While still a number to be reckoned with, this shows a marked decline in both power and reach of SDS, which – this must be said – is leading the opinion polls for some time now.

So, in purely political terms the winner of the referendum battle is the SDS (or the opposition in general), but in the wider perspective both the coalition and the opposition will want to forget the episode as soon as possible.

As written above, the immediate result of the referendum is that RTVSLO remains state rather than public media. But bad news don’t stop here. Since it is obvious that – while legal – the referendum was (ab)used for specific political purposes and that the majority of voters (for one reason or another) wanted to have nothing to do with it, calls for revamping of the referendum legislation are becoming increasingly loud, again especially from the left side of the political spectrum. Indeed, a recent poll showed that were the government call a “referendum on a referendum”, a large majority of people would a) vote and b) vote in favour of restricting possibilities to call a referendum.

Appealing as it may sound, such a move would quite probably be a start of a very bad journey.

5 thoughts on “Referendum on RTV Slovenia: A Night To Forget”