Threatening journalists is not cricket. Regardless of whether you’re drunk as a skunk, in a middle of a bad spell or the journo in question is just plain obnoxious, there are lines you don’t cross and that’s one of them. Doubly so if you happen to be the son of freshly re-elected mayor who has a bad case of love-hate relationship with one Jaka Elikan of Finance newspaper. 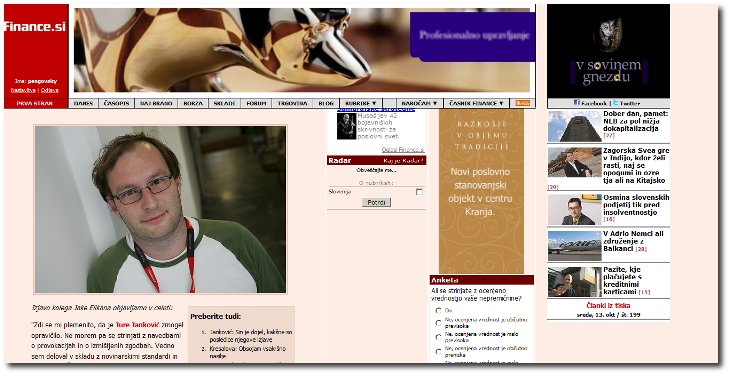 Jure Janković, son of mayor Zoran Janković committed such a transgression Sunday last, when Elikan approached him (apparently more than once) to ask him about the state of his construction and retail company which was owned by Zoran Janković prior to his becoming mayor in 2006. I don’t mean to bore you with details, suffice it so say that earlier in the night Janković, jr. refused to answer questions, but Elikan apparently returned later in the night (with a colleague in tow) to press junior further on this. The kid seems to have lost his nerve, turned to his colleague and told him to “kill this guy“, meaning Elikan. Seeing this, mayor Janković intervened and sent everyone packing, but the deed was done and the next day shit hit the fan.

After the press and some political elements had a field day with this, Jure Janković apologized to Elikan who in the mean time pressed charges and added that he said the words in a state of drunkenness and agitation and that he didn’t mean them seriously, while mayor Janković issued a statement to the effect that if Elikan felt threatened he is right to press charges and that what his son did was wrong. Both Jankovićs also mentioned that Elikan was in their opinion out of line and rude. But that in itself is no excuse to ignore him, let alone threaten him. Despite what seems like (and I’m guessing here) shared animosity between Elikan and Jankovićs, despite his possibly objectionable approach, fact remains that the guy was doing his job. And that’s where the buck stops.

Having said that, the fact that Elikan did not accept the apology in full, saying that neither father nor son understand the role of the media in the society, does show a certain lack of grace on the journalist’s part as well. But then again, grace is not a job requirement in this line of work. There are ways of dealing with unfriendly press, but threats, no matter how irresponsible or not serious they were. It’s one thing to see Sylvester Stallone say “Get rid of him. Expeditiously!” in a sub-par film, quite another to say it for real. That is just uncool.

8 thoughts on “Get Rid Of Him. Expeditiously.”