Yesterday saw the second half of the grand opening of the Stožice sports complex. Less demanding construction-wise, but incredibly more important in terms of symbolism, the new Stožice Stadium is quite probably the high-point of Zoran Janković‘s first term as mayor of Ljubljana. 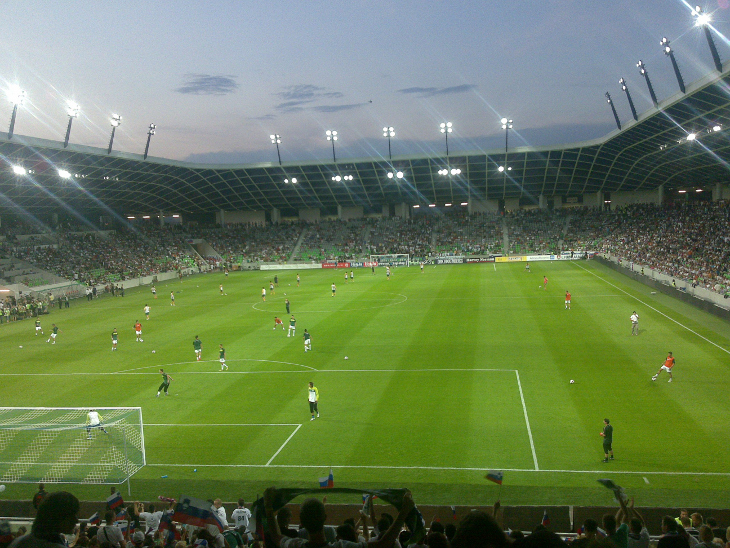 The 16,000-seat stadium was understandably packed and the atmosphere wonderful. If you can’t wait, you can skip the rest of the text and go straight to the video. For the two of you remaining, a bit of context

With the opening of the stadium a sort of spell was broken. Whoever touched the issue of the new stadium in the past ten years crashed and burned politically. Not Janković. The standing ovation he received yesterday and the day before symbolises his complete victory over everyone who ever opposed the new stadium and arena, regardless of how good their arguments might have been.

As crni rightfully pointed out yesterday, this indeed was (at least to an extent) a classic case of panem et circenses. All the more so as Janković is a very populistic politician with quick reflexes and an extremely good touch for public opinon. However, he offsets the perils of politicking from one public opinion poll to another by following his vision (or, as his opponents would say, delusions) which is clearly long term-oriented.

Some say that by building Stožice complex Janković erected himself a monument. They couldn’t be more wrong and it only shows that the main difference between Janković and the rest of the political pool in this city is in the fact that Zoki thinks big. And I mean big. Whoever went about meddling with the stadium project, dealt solely with the stadium and ended up screwing everything up. Janković didn’t just want a stadium. He wanted a sports hall (two of them in fact), an auxiliary football pitch and a huge shopping centre, all with a price tag of some 360 million euro.

And the same goes for the “monument issue”. Stožice are not nearly big enough for Janković to consider them a monument befitting him. A radically changed city, now that’s a different matter. That might be just enough of a monument for our bold mayor 😀

But this self-induced aura of grandeur Janković radiates is compensated by actually getting things done. He was known to spend hours and days on Stožice construction site. Pengovsky heard of stories how he literally threw one of the principal contractors out of his office half-way through the project, almost hurling papers after him and telling him to brush up on his arithmetic since he obviously didn’t know how to calculate costs of the project correctly. I’ve no idea how much of the story is true, but it goes on to add that the entire spread-sheet was covered with cross-outs in red ink and recalculated by hand by the illustrious (and industrious) mayor.

And – politically speaking – he did it all by himself, possibly (but it is way too early to say for sure) securing himself a comfortable second term with an absolute majority in the city council.

Aside from a well-meaning but very late move by education and sports minister Igor Lukšič (who is yet to receive flak over it from the opposition), Janković got no help from the state whatsoever. Zero. Zilch. Nothing. Nada. The much-debated financial construction was perfectly sound at the start of the project. But then everything fell apart. First the government (then still led by Janez Janša) withdrew monies earmarked for the project, then the crisis struck, then Serbian Delta pulled out of the project and Janković together principal contractors ended up in an unenviable pants-down-dick-in-hand position. But rather then dropping everything they pressed on, much to dismay of ever increasing number of critics, which included the political left.

Which is why Janković didn’t lift an eyebrow, when the 12,000 strong crowd booed Prime Minister Borut Pahor, when the mayor announced him prior to Tuesday’s opening of the Arena. It was Zoki’s own private “fuck you” to the PM. His moment of vindication and gloating came moments earlies when the same crowd cheered him fanatically. And when Janković told the crowd to stand up in honour of the people who worked in the project and the people did what they were told, he probably knew what Janez Janša felt, when he during an independence day celebration in mid-90s told people (even those watching on television) to stand up in honour of those who died for independence. Just sayin’ 🙂

But be that as it may, there was a lot of standing yesterday too. Not because anyone told the crowd to stand up (no that note: Zoki’s speech was mercifully short) but because it was a good game. And you don’t sit through good games 🙂