Contrary to his promises and expectations Ljubljana mayor Zoran Janković did not open the Stožice stadium and sports hall on 30 June as neither is yet finished. Having initially been scheduled for autumn 2008, the project was postponed when it transpired that the city of Ljubljana did not own all necessary real estate on the building site and had to negotiate with owners who got the land returned to them in a de-nationalization process. Construction of the Stožice complex, which includes a football stadium, a sports hall, a huge shopping centre and a similarly big parking lot, began in late March 2009 with deadline for completion set on 30 June 2010. That is to say, two weeks ago 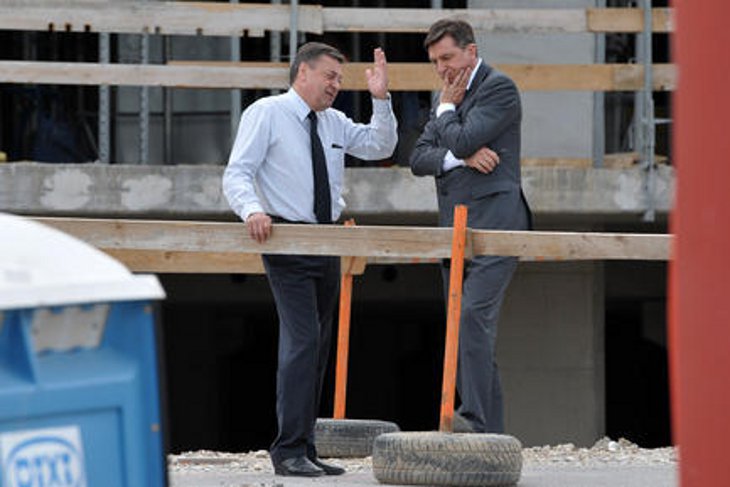 Skipping the rock and roll the project was engulfed in from the start, the situation today is as follows: The sports facilities are nearly complete, as are parking lots and all other necessary infrastructure (connecting roads, etc). The problem is that the money ran out, since the investors were paying for the project out of their own pocket, hoping to get a credit line which

The investors at this point need somewhere in the vicinity of 150 million euro to finish the entire project (shopping centre included). The sporting facilities alone need some 20 million which would cover for “unplanned” construction (i.e.: someone “forgot” to plan for a training football pitch and hall). And this is where mayor Janković’s woes began.

In ideal circumstances the private partner (a company called Grep, established by Gradis G and Energoplan, two relatively powerful construction companies) would sign a credit line with one or more banks, get the money and get to work. The thing is that this credit line failed to materialise, despite the fact that apparently a syndicate of banks made an offer of such a credit line to Grep way back in January this year. And this is where – as always – things get interesting.

Upon realising (or admitting) that some public funding will be necessary for completion of the project, mayor Janković turned to the state for help. Naturally, this was a not-so-small victory for numerous critics of the project. But Janković maintained (and still maintains) that the city will not fork out a single euro in cash for the project, so he called upon the government to help out with 20 mils.

Let’s be honest: Janković wanted to cash in the heavy political backing he gave to the political left on at least two occasions (2008 elections and 2010 referendum on the arbitration agreement), not to mention the fact that he sees himself and the city he runs as the first line of defence against a political counter-offensive Janez Janša and his SDS will hope to mount in the coming months.

Janković found a sympathetic ear with minister for education and sports Igor Lukšič (of PM Pahor’s Social Democrats) who proposed that the government fork out the cash. However, his colleague (both in government and in the party) finance minister Franci Križanič categorically refused, saying that there’s no legal ground to approve emergency budget funding and that Lukšič can go and spend his budget funds if he so wishes. The catch is that just about that time Prime Minister Borut Pahor announced a 500 million euros worth of spending cuts and naturally it wouldn’t look good if almost 5% of that sum were spent on finishing the Stožice project.

There can be little doubt that the current government owes quite a lot to Zoran Janković. He went out on a limb in support of this government and its policies on several occasions and even though he may not be the sole reason the left won the elections or that the arbitration agreement was ratified on the referendum, he sure as hell helped a lot. So yes, Pahor’s government is indebted to mayor Janković. And debts need to be settled. The problem is that it is being done with taxpayers’ money.

But before we get there, there’s one other aspect we need to cover. Although Janković sees himself as being on the same team with all coalition parties on the national level, he is very much NOT on the same team with them on the local level. This is true especially in the case of Ljubljana branch of Social Democrats, who were one of the two strongest parties in the city until he came along in 2006 and decimated them in elections (cutting the number of their city councillors from thirteen to four, if memory serves).

The powers that were (but were to be no more) never forgave him. This goes especially for leadership of Ljubljana Social Democrats, personified in this case by Metka Tekavčič who (among other things) is widely credited for kick-starting Borut Pahor’s political career. Tekavčič was also considered an eminence grise of the Ljubljana City Council and her nod was vital if one wanted to get things done in this town.

With Janković’s ascent her star faded at least temporarily and she did not take it lightly. The two almost immediately took a disliking to each other and matters weren’t helped with Janković’s tenderness of a bulldozer on steroids when it came to passing decisions through the Council. Their animosity soured even more in the past few months and at the moment the seem to love hating each other’s guts. Which is the sort of environment Janković usually thrives in. But it just so happens that finance minister Križanič is also vice-chairman of SD’s Ljubljana branch and one doesn’t need to be a rocket scientist to realize that Križanič’s resolve not to fork out the cash on the national level is at the very least strengthened by the sour relations between leadership of Ljubljana SD and mayor Janković (hint, hint 🙂 )

However, word on the street has it that finance minister Križanič is the least of Janković’s problems. After all, it’s just 20 millions in a project estimated at around 350 million euro. It’s the 150 million credit line which both Grep and Janković are worried about. And rightfully so, it seems. The principal bank of the syndicate in state-owned Nova Ljubljanska Banka (NLB). And if oracles are to be believed, minister for development Mitja Gaspari (formerly of LDS and presently of SD – since 2008) has a lot of leverage both with the banks Supervisory board as well as its management and it is reportedly him who is not all that keen on seeing the Stožice project being bankrolled. Whether the reason for that is the fact that NLB is not in the best of shapes as it is or whether it is something else, remains a mystery, but there you go.

Banks have reportedly been repeatedly raising the bar for Grep to finally get the credit line. The first benchmark Grep had to meet was having to sign leases for about 45% of all retail space. Grep met this condition, but suddenly banks raised it to 60%, plus some sort of state involvement. And this is where the whole thing just got even more political.

According to Finance daily the contract on bankrolling Stožice project is being signed today (or by the end of the week at the latest). Whether or not this has to do with the fact that Lukšić’s ministry just issued a tender for “co-financing sporting facilities of national importance” we will probably never know for sure, but fact of the matter is that ministry of sport is prepared to spend 9.4 million (8.0m of that is EU funding) on “various” eligible sports facilities with estimated project value of more than 5 million euro. You guessed it, at the moment Stožice project is probably the only one eligible for funding right now, and the tender closes on 25 July. In 10 days.

As minister Lukšič (if not the government) is bending over backwards to lend mayor Janković a helping hand, the opposition is going apeshit. They’ve been foaming at the mouth with rage from the very moment it transpired that NLB is the principal bank in the syndicate. Former minister of economy Andrej Vizjak (SDS) was fuming that a state-owned bank will be saving a project gone wrong and that it will never get its money back (curiously enough he had no problem with the state itself funding the operational costs of Stožice sports facilities). Vizjak backed off, after it was explained to him (time and again) that the syndicate will finance the shopping centre (i.e: the private part of the investment) and not the public part (stadium and sports hall), but the avalanche had started and SDS is careful to make as little distinction between the two, branding the almost-completed (!) project as one huge fuck-up.

And now that Lukšič came to the (sort of a) rescue the opposition as a whole went hysterical and announced an interpelation against the minister. The lead MP in this enterprise is none other than Franc Pukšič, formerly of SDS and now of SLS, who just happens to be (lookie, lookie!) mayor of municipality of Destrnik. Now, don’t get me wrong: The opposition can go about filing interpelations as they please. They can even do it repeatedly (as we’ve seen in the case of Katarina Kresal). But when a four-term MP, who is also a mayor of a provincial municipality and is an expert at bringing the bacon home (I love that phrase!), yaps on about misappropriation of public and EU funds and direct government assistance (which as we all know, is a big no-no in the EU), then I smell another case of double-standards.

Anyways, time is running out. The new deadline for opening what will be known as The Stožice Centre is set for 30 July, with the first basketball game (Slovenia vs. Spain) scheduled for 10 August and the first football game (Slovenia vs. Australia) scheduled a day later. Jose Carreras is due to give a concert on 7 October and Leonard Cohen will make a stop in Arena Stožice on 12 October (although some people may be forced to attend his concert at gunpoint. Kidding! 😉 ). Neglecting the political fallout Janković would undoubtedly have to endure in local election if the stadium and the sports hall were not finished in time, pengovsky cannot in all honesty imagine the humiliation which would ensue if the game with Australia would have to be relocated to – say – Maribor. Yes, in that sense the Stožice project is indeed completely and utterly local in nature 🙂

5 thoughts on “Janković Comes To Collect. Or At Least Wants To.”