With a comfortable 7-2 vote Slovene Constitutional Court yesterday banned a referendum on The Erased. As you will remember in March the parliament ammended the law on redress of inujsticed against some 25.000 people who were unlawfully stripped of their »legal alien« status in 1992. 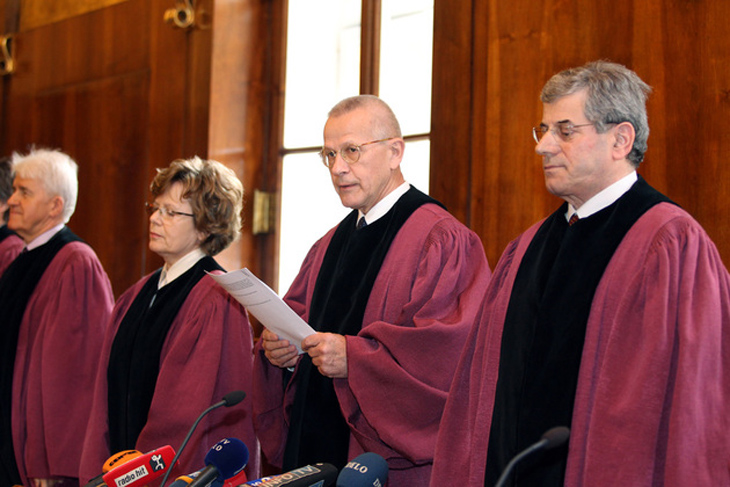 In what later became a recurring-theme-turned-political-platform cries of high treason, betrayal of national interests and defamation of »values of independence« came from the right side of the political spectrum, specifically from the ranks of Janez Janša‘s SDS and Zmago Jeličnič‘s Slovene National Party both of whom demanded a referendum on the law. The government of Borut Pahor disputed the move at the Constitutional Court, arguing that a referendum on rights of a defined minority can not be held. Furthermore it cited several rulings by the Court itself, which invariably say that the Erasure was unlawful and unconstitutional. The court found in favour of the government and banned the referendum, thus

Despite a comfortable majority, however, things could well have taken a different turn. In 2004, shortly before the elections, which put the power to run the country in Janez Janša’s hands a similar situation occurred. Back then the parliament passed what was know “a technical law” on the Erased, returning the “legal alien” status to those Erased whose eligibility was unquestionable. Right wing parties nevertheless called for a referendum (see the pattern) and through a combination of bureaucratic fuck-up and political indecision the parliament failed to submit the question to the Constitutional Court in time and the referendum was held with disastrous consequences both for the Erased as well as for the ruling left-wing coalition and the time led by Prime Minister Tone Rop of LDS.

Six years later and seventeen years after the “erasure” the largest en masse human rights violation in the history of this country is finally to be remedied and a this chapter is finally about to be closed. On a symbolic level this already showed in the form of President of the Parliament Pavle Gantar apologising publicly for the erasure.

With this the incumbent government scores a second major policy victory and this only ten days after winning the referendum on the Arbitration Agreement. But despite the political gravity of the moment there are some ironies, which need not be lost on us.

Firstly: Despite the fact that the erasure took place under the first government of Lojze Peterle (technically centre-right, but in reality a sort of national-unity government), the period between second half of 1992 and September 2004 was marked by a continuous left-wing governments (with one brief interjection in 2000) providing ample time to solve the issue. But instead LDS-led governments put the issue on the backburner until 2004 when it became too hot to handle. Thus it is only fitting that the main political player in this was interior minister Katarina Kresal who at the same time also leads the now severely diminished LDS.

Secondly: The infamous cock-up with the referendum in 2004 happened when President of the parliament was none other than Borut Pahor, the incumbent Prime Minister. Thus he also shares the responsibility for the fact that the whole thing was protracted beyond any reasonable time-span. Not that there is a reasonable time span for human rights violations, but there you go.

So, at any rate: it is good that this issue is now settled at least politically. No point in getting overly excited about it, though. It was high time.

One thought on “Constitutional Court Nixes Referendum on The Erased”