Two days ago pengovsky wrote that following Sunday’s vote on the Arbitration Agreement put PM Borut Pahor on a track to evolve from a politician to a statesman. A bold statement, to be sure. But there are reasons for it and they are not directly connected with political ramifications of yesterday’s vote. 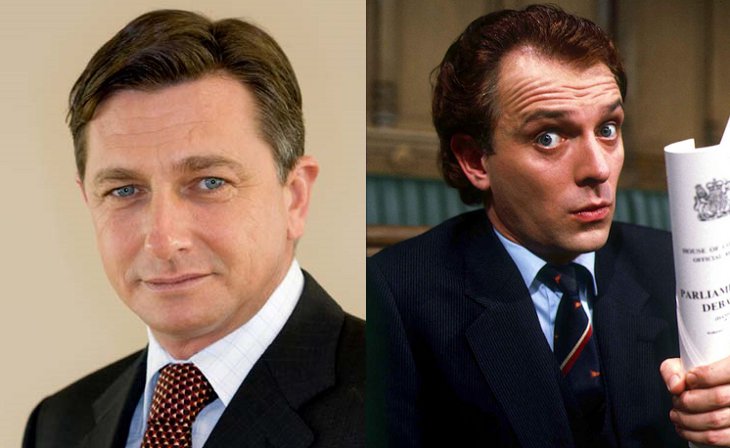 A new statesman. Borut Pahor will hopefully not turn into Alan B’Stard. But there is some physical resemblance nevertheless 😉

Regardless of the fact that Slovene – Croatian border dispute was, from local perspective anyway, increasingly starting to look like something from the West Bank, it is not the only dispute in town, nor it is the most complex. Just take a look around.

Hungary recently passed a law which grants Hungarian citizenship to members of Hungarian minorities in neighbouring states. This in itself would not be problematic, weren’t it for the fact that Hungary and Slovakia have a troublesome history, as well as the fact that both countries have an increasingly dominant nationalistic element. Add to that the fact that Hungary (according to The Economist) is celebrating National Unity Day to commemorate the Trianon Treaty signed after the end of WWI, which deprived it of more than 70% of its territory and has a nasty reek of wishing “the good old days return”. Slovaks are, understandably going apeshit, passing reprisal laws and making references to Hungarian fascist past.

Moving on down, the same Hungarian law applies to Hungarians living in Romania as well. However, Romania is apparently doing the same, awarding Romanian citizenship to its minority in Moldova, so they can’t really complain. It still isn’t kosher, though. Giving away your citizenship to your minorities in other countries is bound to cause tensions and misgivings, as citizenship brings about its own set of duties and privileges, not in the least the right to vote, pay taxes and (if applicable) serve in the army. A country is not happy when its citizens exercise these rights in the name of another country.

South of Romania is Bulgaria, which – apart from having its own myriad of problems – takes a condescending attitude towards Macedonia. Bulgarians long held that Macedonian is just a Bulgarian dialect and have treated its former Yugoslav neighbour accordingly. The tensions and cross looks have eased somewhat, but the animosity and attitude are still there. Not that Macedonia doesn’t have its share of problems, both with Greece (which will not recognise its northern neighbour under its chosen name Macedonia) as well as with its large ethnic Albanian minority.

Which brings us to Kosovo. I trust we need not go over the shithouse that is the Kosovo problem, suffice it so say that some people are again contemplating breaking Kosovo in two, where the northern part (populared mostly by Serbs) would merge with Serbia, whereas the larger, southern part would remain independent. The caveat is that Kosovo Albanians made it clear that in such case they’d demand Serbia give up the Preševo province, which (for all intents and purposes) is located within Serbia proper, but does sport a large Albanian minority. And if that happens, who is to say that Kosovo will not merge with Albania. Which is a recipe for disaster. Since Serbian appetites for Great Serbia have been successfully curbed in the past two decades, it would simply not to allow anything remotely similar to Great Albania come into existence.

Unrest in Kosovo is almost directly linked to unrest in Bosnia-Herzegovina, a country in more or less idle running ever since the Dayton Accords. There too a policy of micro steps is being followed as any jolt in any direction will likely cause a domino effect and bring the house down, quite probably bringing about another round of Balkan carnage (just as Kosovo would if things went out of hand). Problems in Bosnia-Herzegovina are as much linked to Serbia as they are linked to Croatia, both of which have large ethnic groups in the country (I’m sure you know the details) and both countries have in the past been happily awarding citizenships to their brethren living in Bosnia, just as Hungary is doing now.

And speaking of Croatia, this country has its own set of problems with its neighbours. For example: There is a border dispute with Serbia on the Danube and with Montenegro on Cape Prevlaka at the very southern tip of Adriatic coast. The latter is supposedly solved (but has a status of an interim solution) while the former has barely been touched. Both are potentially explosive.

And this, ladies and gentlemen, brings us full circle to the Slovenian-Croatian border dispute. It is not the largest not the most explosive in the region. And yet, there were police stand-offs, bomb scares and similar shit. You can imagine how complicated other disputes are, then.

So, by solving one dispute and hopefully bringing about a solution acceptable for both sides, PMs Borut Pahor and Jadranka Kosor have shown prudence, restraint and commitment to peace. All of those are rare commodities in this part of the world, where drawing and redrawing borders, not unlike Janez Janša demanding territory south of Savudrija (to give an example completely at random) can lead to disaster.

By defusing what was increasingly becoming a flashpoint, PM Pahor can (not necessarily will) become a statesman whose opinion may be valued beyond the (now defined) borders of his country and the Arbitration Agreement can (not necessarily will) become a model for solving similar disputes in the region. So, a new statesman. Not exactly in the Alan B’Stard sense of the word, but the jibe is too good to miss. Then again, who knows…

9 thoughts on “The New Statesman”