Liberal democrats are sulking. Last week justice minister Aleš Zalar lost a prolonged spat with Prosecutor General Barbara Brezigar whom PM Borut Pahor for some reason saw fit to protect and shield from what was admittedly a rather feeble attempt by Zalar to have Brezigar removed from office. As a result, LDS went into sulking mode and held a marathon session yesterday, whereupon it stated four conditions PM Pahor has to meet until Monday otherwise they will walk out of the coalition without further a-do. 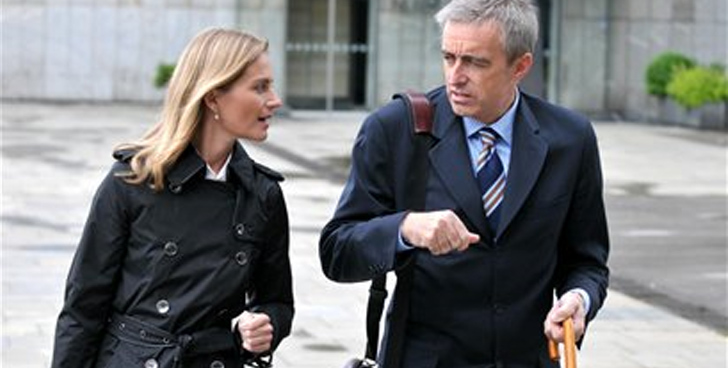 But first you’re entitled to some background as pengovsky didn’t have the time to write this particular piece of political cock-wrangling up. As you know, Barbara Brezigar is widely perceived to be one of key supporters of opposition leader Janez Janša. Her affinity for JJ and his band of merry men showed way back in the 90’s when she – then as a district attorney – closed the case on Depala vas and arms dealing, effectively letting Janša off the hook and contributing to the fact that these items are either interpreted as an attempted coup d’etat and profiteering (a version yours truly more or less subscribes to) or as a ploy by communist mafia to thwart fledgling forces of democracy. At any rate, Brezigar, who also ran for president on SDS ticket in 2002, was widely tipped to be dismissed when current coalition ascended to power.

However. In what is a much recurring theme PM Pahor apparently decided to support Brezigar and protect her from imminent sacking envisaged by Zalar. This is where it gets interesting.

Namely, minister Zalar picked an altogether poor spot for a showdown with Prosecutor General. He wanted her sacked for violating some obscure but supposedly highly important stipulation of State Prosecution’s Rules and Procedures, where apparently Brezigar refused to counter-sign several opinions by her co-workers. Zalar claimed that refusal to countersign was illegal. Which may or may not have been the case, but Zalar’s argument went along the lines of Brezigar not doing her job and he tried to build his case on a rather trivial legal fact which few people outside justice system knew existed. And when Brezigar for her part claimed that everything was in order, both minister and prosecutor were summoned by the PM, not unlike unruly schoolchildren are summoned to the principle’s office. Pahor basically told them to get their acts together and that he isn’t sacking anyone for the moment.

Reasons for Pahor’s (non)decision are probably numerous.
One: if the government were to sack Brezigar (the power to remove Prosecutor General lies with the government as a whole), then he would probably have to sack a good number of other top-tier civil servants who probably cut corners in similar vein.
Two: Janez Janša probably meant it when he repeated the threat of mass protests, should Brezigar be dismissed.
Three: Sacking Barbara Brezigar would probably launch a vicious political battle which would be fought until last man standing, because with the State Prosecutor out of the picture Janša is more or less out in the open regarding a multitude of issues, including but not limited to the Patria Affair.
Four: considering the above, Pahor would do wisely to hold a stronger card than just a technical violation of Rules and Procedures by the Prosecutor General.
Five: Going after Brezigar means going after Janša. And Pahor probably felt that this fight is being forced upon him, so he dodged it.

There is a time and a place to fight Janez Janša. This fight will have to be fought sooner or later if Pahor wants to remain in power. But right now is neither the time nor the place. There is too much at stake and too many issues are being dealt with to waste energy on a fight with an unpredictable result. Health and pension reforms are picking up pace, while the new Family Code is rapidly nearing adoption (possibly in May). Ditto for the law on The Erased. All of these are issues LDS campaigned on heavily. It seems ludicrous not to follow them through. And yet, this is precisely what LDS threatened to do yesterday.

After what was a long and difficult session of top party organs, LDS issued a sort of ultimatum to PM Pahor, saying that
a) he should declassify the transcript of a meeting between Pahor, Zalar, Brezigar and Brezigar’s deputy Branka Zobec Hrastar, who reportedly strongly criticised Brezigar,
b) he should publicly support Zalar’s findings that Brezigar broke Rules and Procedures.
c) That Pahor must support Zalar’s initiative on reforming the State Prosecution and
d) that PM will cooperate with LDS in an honest and fair manner.

Failing to do any of the above will cause LDS to walk out of the coalition. Or so they say.

There is an old Vulcan proverb which says that “when you’re in a hole, stop digging“. The wisdom is lost on LDS whose minister Zalar first went after Brezigar without double-checking whether the PM has his back (he did not) and then continued to pursue the matter even when it was obvious to everyone else but him that he fumbled it. Even then Zalar had plenty of manoeuvring space to drop the issue. The PM said on many occasions that he fully supported the justice minister, but that the two of them see this matter differently. He even went as far as to say that he would not accept Zalar’s resignation. And yet, Liberal Democrats decided to up the ante and threatened to walk out of the coalition.

On the surface this looks like a ballsy thing to do. But in reality it is nothing more than a dick-measuring contest and a bad bluff. Namely: last week, just after he nixed Zalar’s final attempt to sack Brezigar, PM Pahor said in no unclear terms that he will not seek a coalition with Janez Janša’s SDS and that – should by any chance the current coalition fall apart – he will not seek a new majority in the parliament. Meaning either that he will run a minority government or that he will return the mandate. So, what probably happened is that LDS leadership probably read their cards wrong and thought they could play the table on Pahor, since without LDS the prime minister is a vote short of an absolute majority.

While that is correct, leaving the government at this juncture would quite probably endow LDS with a one way ticket to political oblivion as their two ministers Zalar and Kresal would have precious little to show for their time in office save a busted coalition and a string of PR disasters. Careful observers have not missed the fact that the two main (media) proponents of LDS’ sulking are Jelko Kacin and Slavko Ziherl. The former was Katarina Kresal’s predecessor as LDS president and a man “credited” with running the party further into the ground after LDS’s epic defeat in 2002 elections. The latter, however, you will remember as the author of a rather naive letter to PM Pahor a little more than a year ago.

LDS very nearly followed NSi (christian democrats) in dropping off the political map. It practically held on by its fingernails. Nevertheless it made it into the coalition and holds two important portfolios. Katarina Kresal and Aleš Zalar were (and probably still are) in a position to do things that needed to be done long ago, regardless of some exceptionally bad PR they were getting lately (the latest one is about police catching Kresal’s offical car speeding while she was in it). Instead they are sulking, listening to political amateurs and threatening to walk out because of what Gregor Golobič of Zares today (rightly) called a second-tier question. The amount of destruction some people are willing to create just to prove that they are right is astonishing.