Called by Janez Janša’s SDS Slovene parliament yesterday convened a special session on allegedly unsecured loans obtained by Zagorje-based Ultra and alleged involvement of minister for higher technology and Zares leader Gregor Golobič (count one) and SDS’ anti-crisis reform package (count two). The fact that the chamber was packed on count one and severely lacking in presence on count two only serves to show what was more important to elected representatives of Slovene people: a witch hunt or the crisis. 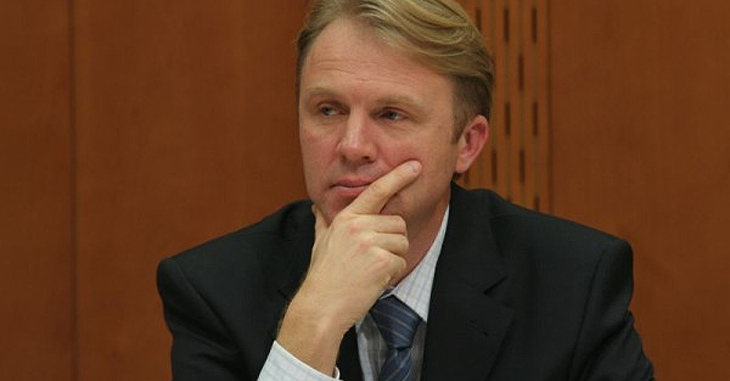 Gregor Golobič had to do some damage control yesterday (source)

The story behind the Ultra Affair was detailed here so we’ll skip this part. As for the session itself, suffice it to say that things looked peachy for minister Golobič at the beginning. The parliamentary investigative committee has so far been notoriously elusive in tackling the job at hand, namely to find out whether Ultra got an unsecured credit line at state owned Nova Ljubljanska banka (NLB) and whether Golobič exerted undue influence to that end. The story was overplayed (especially by state television) and at one point in the last couple of days SDS MP Zvonko Černač even said that the committee’s aim is not to investigate Golobič personally, but rather to see what was happening with unsecured loans as such. The fact that the committee has Golobič’s name in its title suddenly didn’t matter any more.

Golobič was on a roll during yesterday’s session. He outright accused former NLB CEO Draško Veselinovič (the same whom Zares forced to resign for extending a credit line to Boško Šrot) of tampering with the document on Ultra’s credit line, but stopped just short of saying that Veselinovič falsified the chart which (incorrectly, as it was confirmed during yesterday’s session) shows that Ultra’s loans were unsecured. But the media got the hint and Veselinovič was feeling the heat immediately, threatening legal action pending review of transcript of the session.

However, it was threats of legal action that caused Golobič to scew up at the very end of the debate, forcing him to do some major damage-control and basically snatch defeat from the jaws of victory. During what turned out to be a very carefully choreographed debate by the opposition Golobič (unwisely) maintained that not only was Ultra’s credit line secured with more that enough collateral, but also that is was never rescheduled.

Now, according to the parliamentary Rules and Procedures, a certain amount of time is allotted to every side in the debate. At the end of the debate only Golobič and SDS MP Andrej Vizjak (former minister of economy) had some time left and they entered a heated exchange, where Vizjak repeatedly challenged Golobič to prove that the NLB document is false, while Golobič repeatedly replied that it was for Vizjak to prove that the document was genuine and (to amusement of many) made some chirpy remarks about Vizjak’s MA.

Slightly off-topic: Vizjak holds an MA in economics, while Golobič (although clearly überintelligent) only graduated years ago and took some serious flak for it upon becoming minister for higher education. But when the parliamentary VP presiding over the session repeatedly addressed him as magister Golobič, the latter replied that he does not hold an MA, which is a good thing, considering his opponent.

However. Only minutes later Golobič was caught off guard. He spent most of his debate time, while Vizjak had two minutes or so left which he used to present a new set of documents, showing that Ultra indeed did reschedule the credit line on two occasions and accused Golobič of lying. With only twenty seconds left to respond, Golobič flat out rejected the claim and threatned legal action against Vizjak. The problem is that the documents turned out to be genuine. Game Vizjak.

After the debate Golobič called a press conference and did some major damage control, saying that he did not now about the documents and retracted his statement about rescheduling Ultra’s credit line. To his defence, this new batch of documents is dated after he left Ultra and re-entered politics and he had apparently assumed too much when asked the company (in which he holds a 7% share) about their credit line. But as Soap so eloquently put it some time ago, assumption is the brother of all fuck-ups. Either that or Golobič knew about the documents and assumed they wouldn’t surface. Either way, assuming too much, Golobič went all out and built quite a strong case for himself, but walked straight into a trap at the very end, which hurt him from the credibility point of view. And as he has a lot to make up for on that issue, the whole thing looks like a substantial fail.

On the other hand it must be said that on the whole Golobič succeeded in defeating the most serious charges of corruption and exerting undue influence. His accusers changed the story substantially and have scaled down the size of “problematic” credit line from 21 to 5 million euros whereas the document Vizjak produced prove beyond any reasonable doubt that these five millions were properly backed up by collateral and that Ultra had access to credit under the same (or, at the very least, similar) conditions than any other company. That much can be concluded from the documentation available at this time. It seems that just about everybody in this affair went out on a limb, assumed a lot and stumbled plenty

However, things do not stop there. Just today the investigative committee officially named Golobič the subject of its investigation (until now he was “merely” witness) and will as such be entitled to being present, together with his attorney, at all sessions of the committee. From here on things will get increasingly legalistic. Suits and counter-suits will be filed. Golobič himself filed some already. Draško Veselinovič is mooting one against Golobič and these are probably only the beginning. At any rate, it is now clear that SDS is after Golobič personally rather than after clearing up how unsecured loans were granted.

Oh, and in case anyone is interested, the parliament debated SDS anti-crisis reform plan as well and instructed the government to take a look at it. And opposition leader Janez Janša said that the main problem this country has is that there is no consensus on how to handle the crisis. Which, for all intents and purposes, is true. The devil, as always, is in the details. Which, apparently were of little interest to most of Slovene MPs.

2 thoughts on “Assumption Is the Brother of All Fuck-Ups”