Political life of DeSUS president and minister for environment Karl Erjavec is in limbo as of yesterday. Prime Minister Borut Pahor namely submitted a motion for Erjavec’s demission to parliament, citing a damning report by the Court of Audit and hinting to various other mishaps which hampered Erjavec’s performance as of late. Not that he had a lot to show for himself in his first year as minister of environment, but there you go. 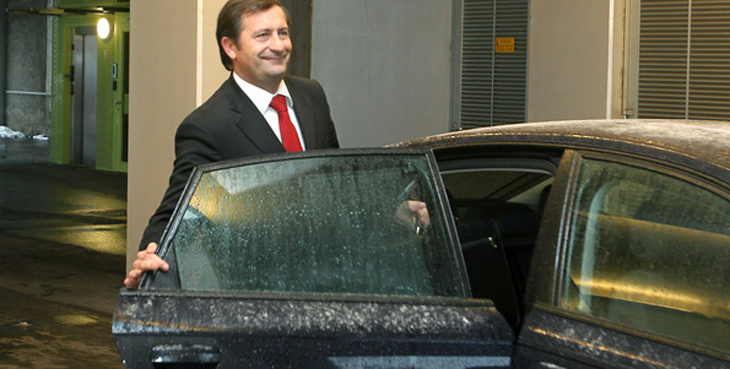 Erjavec was very much accident prone even while he was defence minister during the government of Janez Janša (just as today, then too DeSUS was a part of the ruling coalition). Not only did his ministry “mistakenly” transferr some 600.000 EUR to a bank account of a Maribor-based company, only never to see part of the money again, but also signed the contract to purchase the now-infamous Patria APCs. When shit started brewing (first over quality of the product), he defended himself saying that he only signed the document which was brought to him by his secretary to be signed (this bit will become important later on) and that he was unaware of any harmful provisions in the contract.

By then Erjavec started sporting some weird teflon characteristics as none of his accidents reflected badly on him. Even more. Regardless of the fact that he was (by way of office he held, at least) embroiled into the Patria Affair, no mudsling, no matter how gooey seemed to have stuck on him. People were being accused left and right of him, charges of bribes were being laid, only he, apparently blissfully ignorant of the storm around him went about his business and led his party to a resounding success in 2008 parliamentary elections, where it won seven seats. However, the honeymoon was soon over as he and the newly minted PM Borut Pahor fell out over which portfolio Erjavec be given. He himself (naturally) wanted to remain defence minister, but Pahor didn’t want to have any of that and after a brief show of force by both politicians shoved the environment portfolio down Erjavec’s throat.

Fast forward one year and suddenly criminal charges are filed against Erjavec, accusing him of gross negligence in the Patria Affair which are the first charges filed against any serving member of any Slovenian government. Immediately the question of whether Erjavec is fit for the job was raised, but PM Pahor insisted that Erjavec is inoccent until proven guilty, whereas the dilemma of whether the charges hamper his efficiency as a minister, Pahor left to Erjavec himself to decide on.

However, this push came to a shove days ago when Dnevnik daily ran a story on Erjavec signing a contract to sell 49% government stake in a energy company without government approval, although the government must approve every single sale of its assets. Erjavec defended himself that he was misled by the notary, who apparently assured him that everything about the sale is squeaky clean. In essence, he just signed on the dotted line without reading the contract. Rings a bell? Thought so…

And just to top it off, only yesterday did the Court of Audit published a highly critical report on activities related to establishing an effective waste-separation system in Slovenia and concluded Erjavec was grossly negligent in execution of his ministerial duties and recommended that PM Pahor dismisses Erjavec.

It was at that point that Teflon Karl’s credit seems to have run out. Two counts of “signing without reading” and two counts of “gross negligence” combined with some heavy-duty discipline enforcing within his party was just too much to handle even with his slick style of politics. At this juncture Erjavec seems so radioactive, that no-one will touch him with a ten foot pole, his own MPs included. It was only last week that hewas yet again threatening with DeSUS walking out of the coalition should his ministerial position be endangered. But yesterday DeSUS MPs were in disarray, some saying that it was all a set-up, others saying that they will go with the flow and vote with the majority of the coalition. This means that they will vote to dismiss Erjavec, as every other coalition party went on the record saying that they will support the demission.

As things stand now, Erjavec is politically dead and decaying rapidly. It should not be put past him to regroup and cajole his remaining five MPs to oppose his demission in the parliament, regardless of their stated intention to remain a part of the coalition. However, the mathematics of the parliamentary vote makes it virtually impossible for Erjavec to survive the vote. This would be possible only if he were supported by what is left of DeSUS parliamentary groups, entire opposition plus the two minority MPs. But this scenario borders on outer limits of science fiction, especially since Zmago Jelinčič of nationalist party already said that his MPs will vote for demission.

This leaves only two questions. What will this mean for parliamentary majority of Pahor’s government and whether the whole shebang was a neatly directed set-up to get rid of Erjavec.

As far as parliamentary majority is concerned things neither look too bleak not too hot for Pahor. The coalition enjoys a majority of 50 votes in a 90-member parliament. Ever since Franc Žnidaršič and Vili Rezman were ejected from DeSUS parliamentary club (although now independent, they still support the coalition), Erjavec’s party has 5 MPs, one of whom – Vasja Klavora – is also vice president of the parliament. So if Erjavec somehow persuaded his MPs to leave the coalition, PM Pahor would be one vote short of an absolute majority (46 votes) and would effectively run a minority government, leaning on minorty MPs and Zmago Jelinčič’s nationalist to supply the votes needed. Admittedly not a nice prospect, especially as far as Jelinčič is concerned.

But a possibly hung parliament means that neither can the opposition muster enough votes to form a new majority, which makes Pahor’s position more or less safe, especially when one considers the more earthly conequences of DeSUS leaving the coalition. It can be expected that Vasja Klavora (to pick an example completely at random) would be replaced as parliamentary VP, a privilege few would be give up willingly. So with a bit of horse-trading PM Pahor can get rid of Teflon Karl and keep the majority in the parliament.

Which leads us to the second question. It Erjavec a victim of a smear campaign or is he experiencing a series of highly unfortunate events? At the risk of sounding naive, pengovsky believes that it is a bit of both. Shit Erjavec managed to get away with until now is almost unbelievable and – combined with his quick wit – borders on hilarious. Fact of the matter is that he was a pain in the ass of many a political big shots including (but not limited to) Katarina Kresal of LDS and Gregor Golobič of Zares, to pick two examples completely at random

Especially his repeated threats to walk out of the coalition (a tactic that worked well in Janša’s government) were winning him no friends and were wearing the patience of other coalition partners thin.

So a certain amount of plotting must have taken place, otherwise things would not have fallen into place so neatly. Even more, the way PM Pahor handled it suggests that in the true spirit of Sun Tzu’s Art of War the battle was won before it begun and that Erjavec was reduced to watching himself going from bad to worse. Namely, after the damning report by the Court of Audit Pahor called a meeting of coalition leaders (including Teflon Karl) and then had a tete-a-tete with him. Emerging from this meeting Pahor and Erjavec announced that they both agreed that the PM would propose Karl’s demission and let the parliament decide whether or not the latter gets to keep his job.

It was a rather clever trick. Short of Erjavec stepping down of his own accord, there is no other way to replace him but to ask the parliament to dismiss him, since it is the parliament (rather than PM) who appoints ministers in the first place. But the way Pahor phrased it and used the report of Court of Audit as a pretext, he tried to keep the appearance of conforming to checks and balances of various institutions and – somewhat surprisingly – Erjavec seems to have bought it. Either that or they made some sort of a deal to keep the soon-to-be-former minister happy. Namely, Teflon Karl was not elected to the parliament in 2008 and will (once dismissed) remain sans any relevant public position, save being a president of DeSUS. But a party president who is not in the governmental loop is poised to soon become an ex-party president as we have seen a year or so ago in case of Slovene People’s Party and its president Bojan Šrot who also didn’t hold a government post but was/is rather mayor of Celje.

However, it should be said that Erjavec has no one blame but himself. It was more than apparent that he was rapidly alienating the rest of the coalition as well as part of his own party. And yet he was careless enough to cook up shit. Had he more friend in the coalition, these mistakes and blunders would probably be forgiven, but since he was getting on everyone’s nerves, the rest of the gang saw this as an opportunity to get rid of him expeditiously. So instead of a slap on the wrist he is now being charged with gross negligence.

Moral of the story: if you’re a political maverick, you have to cover your ass. Otherwise you get busted.