Last week the European People’s Party whose proud members include Slovenia’s very own SDS, SLS and NSi, led by Janez Janša, Radovan Žerjav and Ljudmila Novak respectively, held a congress in Bonn, Germany. One of many results of this fruitful gathering was also an Emergency Resolution on Totalitarian communist regimes. The text of the resolution condemns glorification of Communism in Slovenia, specifically in the form of naming a street in Ljubljana after Josip Broz – Tito and presenting Tomaž Ertl, the last Slovenian socialist interior secretary with a medal for services. 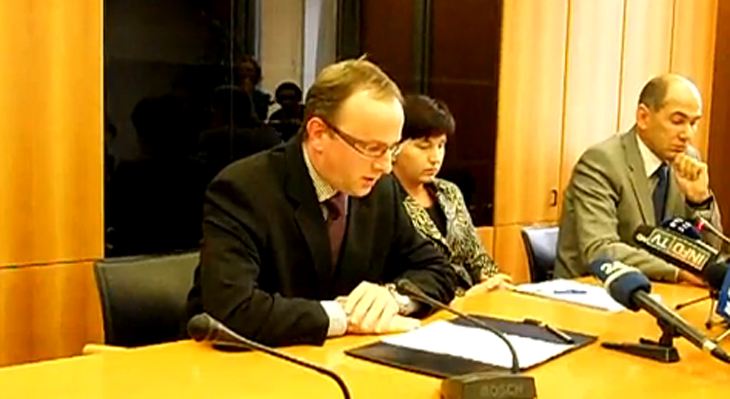 EPP furthermore criticises local and national governments in »some former communist countries« which are thus rewriting history, prolonging divisions within nations, give a bad example to younger generations and are preventing these countries from completing the transition into democracy.

Now. Regardless of the fact that this resolution is only one of eleven passed by EPP in Bonn, the document is incredibly important, because it a) illustrates the attitude EPP has towards new EU member states, and, b) shows the infinite double standards of Slovene political right as well as utter lack of patriotism, something the right is only too keen to accuse their left-wing rivals of

Apart from Slovenia, EPP in its Bonn resolutions specifically mentions three more countries: Honduras, Cuba and Belarus. It goes without saying that none of these were mentioned in a favourable context. So, the question du jour is what prompted the European centre-right mama-party to put Slovenia in the company of banana republics? The answer lies both in the text of the document as well as in its properties. Literally.

The text of the resolution shows that the resolution was adopted in more or less proposed form. Had that not been the case, then a few (historically and geographically incorrect) exaggerations, which have a function only in Slovene politics, would never have remained in the text. For example: Titova Street is in fact not really one of Ljubljana’s main streets but will be (once it is actually built) one of this world’s many featureless traffic arteries, overlooked by the new Stožice Stadium (once it is built as well). Truth be told, Titova Street once indeed was Ljubljana’s main street, stretching for kilometres, but in a dash to separate themselves from all things socialist, Ljubljana city council (at that time dominated by right-wing parties) cut the street in two and named is Slovenska (Slovenian) Street and – oh, the irony!- Dunajska (Vienna) Street.

Things get a bit more complicated when the resolution compares Slovenian secret police UDBA to East-German Stasi or Romanian Securitate. True enough UDBA was a full fledged political secret police and an instrument of state terror, but drawing comparisons between it and Stasi is nothing more than a thinly veiled act of false heroics, saying »look, we Slovenians endured secret police-induced terror as well«. Fact of the matter is that, just as socialism itself, secret police in Slovenia and Yugoslavia went through different phases, including its bust-up in 1966 when Tito dismissed the all-powerful federal interior minister Aleksandar Ranković who was allegedly spying on the Old Man himself. After the shake-up UDB (or UDBA as it was popularly known) was organised federally, with branches (or services) in republics (known as SDVs) being under control of republic’s leadership as well as answerable to federal administration, known as UDBA. This dual system meant (among other things) that Tomaž Ertl did not control UDBA but rather Slovenian branch of SDV, which – although still a secret police – did not even begin to resemble Stasi, Securitate, KGB or any other acronym that sent shivers down the spine of most Europeans until 1990s

Make no mistake: the above does not mean that either Titova Street or Ertl’s medal were bright ideas. They were not. This city and this country would do just as well without either of them. And the EPP resolution might even be right in one sentence, where it states that such moves only prolong healing of wounds of the nation. However, the rest of the text shows that resolution is less about healing wounds and much more about plain snitching, intentionally confusing cause and effect and (as already noted) double standards

When Blaž Zgaga and Matej Šurc crafted the so-called Petition 571 (which, btw, came a year too late to have any real effect), where a significant number of Slovenian journalists alerted the international public to the authoritarian methods Janez Janša and his government subscribed to when dealing with the media, all hell broke loose. Janša claimed the petitioners were only trying to taint the image of the »beacon for the 21st century that is Slovenia« before his government took over the EU presidency in the beginning of 2008. Fast forward two years later and suddenly we find those very same parties which comprised Janša’s coalition, having no second thoughts about snitching their own country to the mama-party and doing their dirty laundry on international stage. All this regardless of the fact that the frame of what is acceptable for a political party is much narrower than it is for a grass-roots organisation.

As for cause and effect is concerned, things are predictably twisted. When accusing the current government, both local and state, of rewriting history, the political right conveniently forgets that this is the sport it excels at. Even more. In a classic rhetorical manoeuvre, the right wing justifies its attacks on Titova Street and Ertl’s medal by the very resolution which it proposed in the first place

Namely. It is almost certain that the EPP resolution was drafted by no other than Lojze (Alojz) Peterle, EPP’s former vice-president and former Slovenian PM, currently serving a second term as MEP for Nova Slovenia (NSi). At the very least this is the conclusion one comes to when opening File->Properties on a Word document which was initially circulated in the public and where one »A.Peterle« is noted as author of the document.

Slovenian political right is known for seeking confirmation of its actions and positions abroad. This would be perfectly OK except for the small fact that the driving force behind this is an ideological fear of Communism, which occasionally explodes into full-fledged witch-hunts. This fear, combined with an insatiable thirst for power (inherent to all political players) can have disastrous effects. Thus have, for example Slovenian pre-WWII authorities, led by ban (governor) Marko Natlačen of pre-war SLS actually contacted the advancing Nazi army and asked for Germany to occupy entire Slovenia, whereupon they would be granted some sort of autonomy in exchange for loyalty to the Nazi regime. Ironically, it was the communists and their existing underground network (set up as a result of persecution by pre-war authorities) who ultimately, after a short period of soul-searching organised and then monopolised an effective guerilla war.

That same fear of Communism also drove scores of Slovenians into making more wrong choices, notably to collaborate with Nazi Germany and Fascist Italy, under the guise of fighting communism. And today, the right wing again seeks protection of foreign powers in order to fight what it sees as resurging Communists forces, although any die-hard Commie that may still be alive in Slovenia will tell you that what we are seeing today in the left wing is neither resurgence nor Communism.

But so it goes. From the role of collaborators during WWII to the role of some people in the drive for Slovenia’s independence, political parties of Slovene right are reinterpreting history faster than Stalin’s regime re-touched official photos, depending on who curried Joe Džugašvili’s favour. At the pace this has been going on recently, it was more or less obvious that the left wing will try to return the blow by an ill-judged move or two.

After all, this still is a democracy, where people are allowed to see things differently, regardless of the fact that EPP resolution states that Slovenia has yet to become a democratic country. This of course immediately raises the question of whether Janša’s 2004-2008 government was elected democratically. I sense we might get an answer sooner than expected 🙂