Yesterday evening Croatian parliament voted to approve the arbitration agreement between Croatian PM Jadranka Kosor and her opposite number in Slovenia Borut Pahor aimed at finally solving the border dispute between the two contries. The debate in Sabor (the parliament) was fierce and Kosor had to endure a barrage of criticism and insults. She was even accussed of “premeditated high treason” (as if there’s any other kind), giving away 100 square kilometres of Croatian sea and so on ad nauseam. Kosor responded by saying that the agreement is the best possible under current conditions and that the clause 3b does not automaticlly mean direct Slovenian access to high seas. But just to be sure, she attached an unilateral statement to that effect, which she hopes will be co-signed by the Swedish EU Presidency. In the end, despite everything eighty MPs out of 134 voted in favour of the agreement. 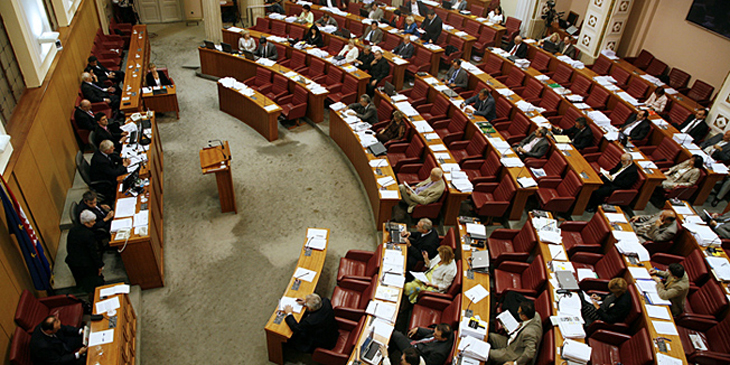 One of the results of the vote is that we can now finally see the official text of the agreement (scroll down to page 7 for English original), specifically, the infamous clause 3b, which speaks of “Slovene junction to high seas”. But even more importantly, the document reveals (in Article 11) that the whole procedure will begin only after Croatia signs the EU accession treaty. Now, as with clause 3b, this particular stipulation is being read almost as many ways as there are people reading it (on that note, let me add that the amount of experts on English language has risen dramatically on both sides of the border in the past few days since the document was leaked).

Anyhoo. The Croatian position seems to be that Croatia will enter the arbitrage proceedings as a full member of the EU which should even the odds against Slovenia in terms of political leverage. It also believes that this is a way to avoid a possible Slovenian referendum on Croatian EU entry due to an unfavourable decision by the court. Given the fact that the EU membership process usually lasts about a year, while the court is expected to deliberate at least three years, they may well be on to something.

Thus the ball entered the Slovenian court, where the unilateral statement Croatia added to the document is making everyone nervous. PM Pahor already said that – should the Swedish presidency co-sign the Croatian statement (as per Kosor’s wishes) – the deal is off as the statement can be understood to deny Slovenian direct access to high seas and can therefore influence the interpretation of the text of the actual agreement. But as he is preparing to run the agreement by the parliamentary foreign relations committee once again, the opposition is rumoured to be preparing a motion to severely stall the process or even to call a referendum on the agreement itself.

This is in part fuelled by an opinion by former judge at the constitutional court Janez Čebulj, who days ago wrote that referendum on the arbitrage agreement should be held before the two PMs sign it and not after the deed. Now, one can say that Čebulj’s opinion is biased and politically motivated. After all, he is known to be on good terms with the political right and rumour had it that he on more than one occasion leaked information on politically sensitive issues to SDS before the Court’s final rulings. However, on the whole he was a good constitutional judge, much better than many people are willing to admit. Therefore his opinion carries weight. PM Pahor and the coalition will have to present good arguments against holding a referendum at this junction (pun very much intended)

On the other hand, it has to be said that the opposition, specifically, Janez Janša of SDS, Radovan Žerjav of SLS and Zmago Jelinčič of SNS probably have ulterior motives for shooting down the agreement. This is a very tricky moment for the government as well as for PM Pahor personally. If he fails, his credibility will have been damaged the field of foreign relations, the only area where he indisputably knows where his towel is. So, shooting down the agreement basically means shooting down Pahor and forcing him to resign from office. Or, at the very least, making him extremely docile.

Also, resolving the border dispute would deprive the current opposition of a big part of their political platform and – as a result – of their electorate. Curiously enough, this would least affect Jelinčič’s nationalist party, as their platform shifts to accommodate an untapped source of votes (being strongly nationalistic in 1992 and 1996, they campaigned on a pro-Serb, anti-NATO platform in 2000). Lack of Slovene-Croat border dispute would damage Žerjav’s Slovene People’s Party (SLS) as the dispute is more or less their raison d’etre, but it would also make dent Janša’s ratings, although not by much.

So, there are a few ways how this could still go wrong. We’ll see later today how things turn out. A Cabinet session is due to start in about 15 minutes, after which parliamentary committees on foreign and EU relations will convene in a special session and debate the issue.

However, the opposition can use its 30+ votes to call a subsequent referendum only after the agreement is ratified in the parliament (presumably mid-December). If they wanted to hold a conslutative referendum, they’d have to convince a majority of MPs, which is not likely to happen any time soon. The bottom line therefore is, that the referendum is most likely to be held some time in early 2010. Unless of course someone devises a smart way of avoiding it altogether.