Besides the border dispute and more or less intelligent pieces on journalism on that issue, there are also other aspects of Slovene-Croatian relations. Yesterday Dr. Arf posted a comment mentioning an “incident” where a Slovenian tourist in a restaurant in Zadar, Croatia forked out 1.300 euros and bought an entire aquarium of lobsters (save those which were already sold to other gests) whereupon he proceeded to release them back to the sea. 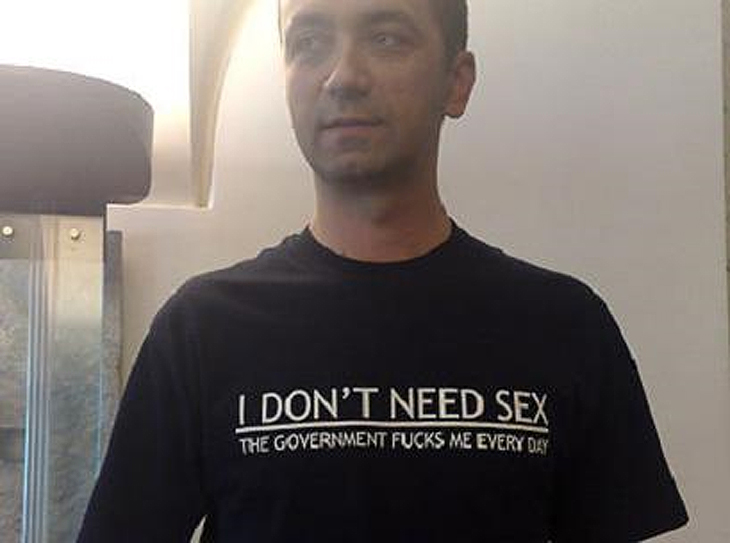 In not-so-related news, an auction was held in Croatia for the now-legendary T-Shirt worn by cameraman Ivan Cvirn, who enraged newly minted Croatian PM Jadranka Kosor weeks ago. While shooting footage during her inaugural session of the government Cvirn wore a T-Shirt saying “I Don’t Need Sex. The Government Fucks Me Every Day.”. Jadranka flipped, gave the cameraman a public dressing-down and ejected the entire crew. Ivan Cvirn subsequently lost his job at RTL Croatia (and is now suing them) but he also decided to auction off the infamous T-shirt with proceeds to go to charities. According to today’s Dnevnik, the T-shirt goes to a bidder in Ljubljana, who will fork out 573 euros (or 4.000 Croatian kunas). Since it was a web auction, bidders used nicknames, but pengovsky thinks that the mysterious bidder might be none other than Nedeljko Dabić, a free-wheelin’ and utterly unsuccessful candidate on this year’s EU elections. Why do I think that? Well, the bidder’s nickname repotedly was “50 is more than 100”

P.S.: you can tell the politicians are on vacations, can’t you?

9 thoughts on “I Don’t Need Sex. The Government Fucks Me Every Day.”