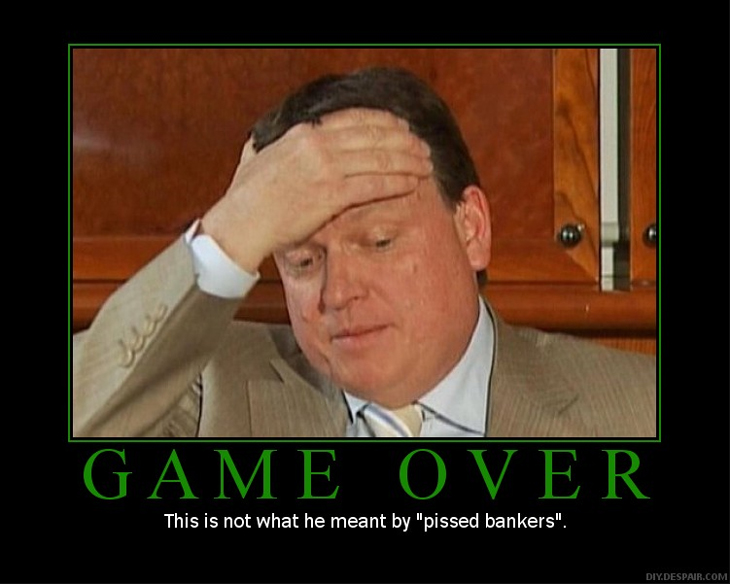 (source of picture, DIY at despair.com)

Yesteday Nova Ljubljanska Banka (NLB) impounded shares of Laško Brewery and Mercator from Infond Holding, which had defaulted on its loans it took out to buy Laško Brewery. As you know, Infond Holding is ultimately controlled by Boško Šrot and his company Atka Prima, with another company – the infamous Kolonel – in between the two. Through Infond Holding Šrot was performing MBO of Laško Brewery for which NLB alone granted a loan of some 130 million euros. As Infond defaulted on its loans (a combination of recession, investigation by Competition Protection Office and political pressure on banks to stop being excessively nice to Šrot), banks started making nervous noises and began talk of impounding shares Infond put up as a collateral if the company (and ultimately Šrot) cannot come up with cash to pay off the loans.

Šrot was obviously in no condition to do that, as his house of cards was built on a presumption of a continuously rising share prices of investments like Mercator, a stable cash-flow from Laško and subsidiary companies as well as politicians turning both blind eyes to his antics. Two out of three would have been nice, but since none of the above is the case any longer, the inevitable happened. Banks are starting to collect and they are none too nice about it. Yesterday NLB sold 23% of Laško brewery and 10% of Mercator and cashed in on some 157 million euros, which means that it just about broke even. Today, Abanka (a smaller bank) is following suit, selling some 23 million-worth of shares which it impounded from Infond Holding, and other banks are expected to do the same.

Thus Boško Šrot no longer owns Laško Brewery and – by extension – no longer controls any of Laško’s assets, which include Delo newspaper. He basically no longer owns anything beyond immediate assets of Atka Prima, which are bound to be impounded as well. The combined value of 180 million euros is peanuts with close to a billion euros of debt Šrot is said to have run up while trying to take over Laško.

EDIT: It was only an hour or so after this post that Infond Holding officially declared that it is insolvent. End of story. Only pieces remain. And possibly criminal charges.

5 thoughts on “Game Over”