Gregor Golobič, president of junior coalition member Zares and minister for higher education, science and technology was on top of his game only a week ago when his adamant insistence on non-extension of huge loans to Laško Brewery by Nova Ljubljanska Banka (NLB) caused the freshly minted bank’s CEO Draško Veselinovič to vacate his post prematurely. As you will remember, in mid-April Veselinovič approved an extension of an unsecured loan (a loan without enough collateral) of some 150 million euros to Infond Holding, one of many companies controlled by Boško Šrot in a complicated chain of ownership of Laško Brewery. 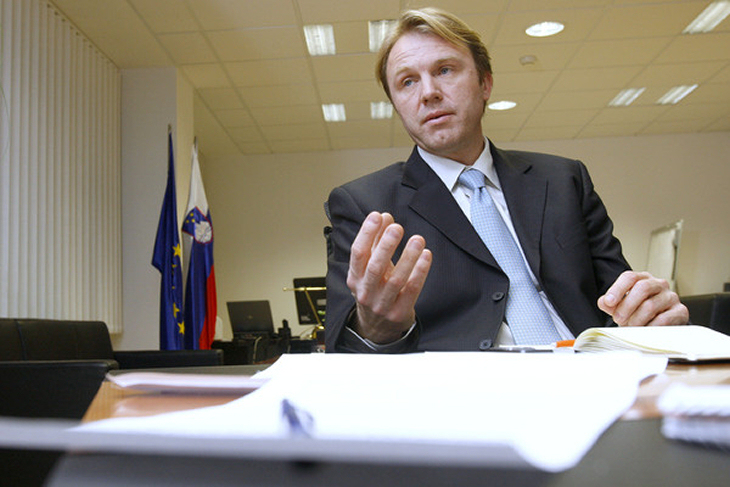 Two months ago it seemed that it was Katarina Kresal’s LDS, another junior coalition partner who played their cards right. Their man Draško Veselinovič was the head of NLB, the biggest financial institution in the country and their stock soared in terms of influence. But then a series of really stupid moves by Veselinovič and his party (for it is unlikely that he decided on such big issues entirely of his own accord) caused them to lose in a week all that they had painstakingly gained in months.And then shit begun hitting the fan.

Out of nowhere an anonymous report appeared which claimed that Ultra, a high-tech firm from Zagorje, where Golobič was employed during his “exile from politics” between 2003 and 2007, had some 21 million euros of unsecured loans at NLB.Naturally, all hell broke loose, with accusations of double standards, mischievousness and corruption flying in Golobič’s general direction. This was the second time Ultra came under media and political spotlight in recent years. Prior to his electoral victory in 2004, Janez Janša dragged the company through the mud in a series of pre-election parliamentary sessions, where he presented an image of a country infested with clientelism and nepotism where an almighty LDS (yes, I know it’s hard to believe that it’s the same party) decided who made it and who didn’t.According to Janša, Ultra was a prime example of this.

A sligth but necessary digression: Whatever one may think of Ultra, those guys do some really hardcore shit. The company is most widely known in Slovenia for creating Moneta, a mobile-payment solution which is widely used (paying the parking fee by mobile really never was so easy) and which – admittedly – gained popularity once it was adopted by Mobitel, the largest Slovenian mobile operator which just happens to be state-owned.

But pengovsky first heard of the company years ago when I interviewed an attractive and (as it later turned out) freshly-single writer/artist who said that she couldn’t stand her boyfriend (or was it fiancee?) being constantly on call in this company called Ultra, which builds systems for measuring how much oil is lost to vapour during transport. Apparently oilmen went gaga over the prospect of literally seeing their petrodollars vanishing in thin air. Years later The Firm™ built a mobile webpage for LPP – Ljubljana Public Transport (point your phone’s browser to http://mobi.lpp.si) and literally stumbled over their WAP application for bus ETAs, which Ultra built as a part of a comprehensive overhaul of LPP’s IT overhaul. I was amazed that something as useful was wholly unmarketed. We obviously made a link to the application and from what I understand it is the most used part of LPP’s mobile webpage.

Anyhoo. Just as in the summer of 2004, Ultra became an object of half-truths and misinterpretations in the summer of 2009. As accusations of relatively huge unsecured loans were made, Ultra authorised NLB to make a full disclosure. It turned out that the company has about 5 million euros worth of loans, all of which backed up by proper collaterals. Even more, those loans were used to finance company operations rather than MBOs as it the case with so-called “tycoon loans” of Laško and Istrabenz. Afterall, Ultra already is privately owned.A part of this full disclosure was also the fact that Gregor Golobič owns 10% of Ultra SUM, a Dutch-based company, which is the nominal parent-company of Slovenian Ultra, owning about 80% of the latter. So far so good. But when asked about his personal assets during the 2008 election campaign, Golobič failed to mention this particular share of Ultra SUM.

Which is why today he is in such shit.It is one thing not to tell when not asked. But when asked about a touchy subject such as personal wealth, politicans are expected to be forthcoming. When Golobič was elected president of Zares, pengovsky wrote a very cynical post, basically saying that there is no new politics, only old politics done in a new way. Golobič disagreed and thus raised the bar of expectations much much higer.And that is the main problem right now. Technically, Golobič did nothing wrong. It must be said that Gregor Golobič followed the letter of the law and did report his share in the company to the Anticorruption Commission upon becoming minister. Also, his share in the company is small enough (8 percent of Slovenian Ultra) for the company to escape the ban on doing business with the state. The cap is set at 20 percent, a detail pengovsky learned painfully years ago. But apparently when media went on their annual “how-much-do-politicians-earn” rampage (as they do almost every February), Golobič again failed to mention his share in Ultra. Which -when the story broke days ago – only reinforced the appearance that he has something to hide.

Yesterday Golobič admitted to making a mistake and had already apologized for it. He said that he held back on his share in Ultra out of fear of company being dragged through the mud yet again just because he owns a part of it, but reiterated that he did report his ownership to propper authorities. He condeeded that his actions go against the principle of transparent and accountable governing and that a basic trust, necesary for creating resposnible and trustworthy politics, was tainted. He added, however, that it remains to be seen whether this mistake is so grave that it would require his resignation.

Naturally, all hell broke loose, especially when PM Borut Pahor said it is for Golobič to decide what to do next, but added that he will wait only until the end of next week. This translates as “I’d have your head for this, but I can’t because you’re the president of a coalition party so I sure hope you resign by yourself“. Pahor’s reaction puts an interesting angle on the whole business, as it was uncharasteristically swift and decisive, the very adjectives we’ve come not to expect from Pahor.

But first, let’s take a look at Golobič’s actions. This Ultra affair made him uncharateristically edgy. When state television aired its first piece on the issue and made a claim about him giving a helping hand in the company getting 21 mil in unsecured loans, he came on really hard, stating outright that the journalist and his editor published politically motivated lies in a manner which would make Janša’s SDS proud. Additionally, he accused them of denying him the opportunity to respond by deliberately sending him questions late in the afternoon, knowing that he will be attending a public ceremony and will not be able to respond until the piece was published.

To Golobič’s credit, the piece indeed featured the famous “minister was unavailable for comment“, but what bothers me is the manner in which he responded. OK, so the piece was indeed based on false information, argumentative and biased. It was a classic example of agitprop journalism which was always present in Slovenia but which especially flourished under Janša’s government. But Golobič was neither the first nor the last person to find himself on the wrong end of a semi-competent journalistic stick. And whatever the motives of this journalist and/or his editor, Golobič should have responded more calmly. If the journalist and his editor got a bit too eager in creating this piece, at least Golobič should have held his composure. But I guess it came too close for comfort. On the other hand, I’m happy to see that Ultra plans lawsuits against those who knowingly spread false information about its loans. There is nothing worse in the business world than an undeserved bad rep.

While we’re on the issue: Almost three years ago, during an election campaign this journalist and pengovsky worked side by side covering the 2006 municipal elections and I found him to be generally competent and on the whole a rather likable guy, so I’m at a loss to explain such pieces (it’s not the first time he authored a piece like this).

Anyways – once it became obvious to Golobič that shit will hit the fan one way or the other, he did the right thing and made a full disclosure and apologized. I do feel, however, that he is needlesly nitpicking over whether “witholding information” is the same as “lying”. Even if he may be right on this point (although I’m far from sure that he is right), he is losing energy over a rather trivial question. Bottom line is that he fucked up. Not because he did anything illegal, but because he failed to meet his own standards.

Having said that, it not unimportant to put the entire affair in a political context. While Golobič’s initial reaction was that SDS is behind the whole thing, it seems more probable that we are witnessing an inter-coalition backlash. An attempt to make Golobič toe the line, if you will. By employing his superior political skill, Golobič made sure Zares’s power in Pahor’s government grew disproportionally to other coalition partners. This made a lot of people unhappy, especially LDS who were oh-so-fucking-close-to-heaven only to come crashing down, aided an abetted in that painful excersise by Golobič and Zares, who pointed out bad practices in appointing people to powerful positions, rather than turning a friedly blind eye to them.

Even PM Pahor probably has a vested interest in seeing Golobič humiliated. It all began even before the goverment was formed, when Golobič forced Pahor to trasfer the ministry of culture to Zares quota by threatning to quit the coalition. Pahor caved in and had to go back on a word he gave to an earmarked candidate. Secondly, there was the ire Pahor got from Zares for his failed experiment with former foreign minister Dimitrij Rupel and some other coalition clashes and you can see that Pahor is not the one to rush to Golobič’s rescue right now.

And finally, there’s the plan to transfer the Directorate for Electronic comunications from under minisitry of economy (headed by Zares’ Matej Lahovnik) to Golobič’s ministry. The idea was immediately opposed by some in Pahor’s Social Democrats, even though (or precisely because) it would put an important directorate where it belongs.Namely, this particular directorate deals -among other things – in radio frequences. Not just FM radio (like the one The Firm™ never got), but mobile telephony, wi-fi and stuff. It also deals with regulating ISP-related stuff and is generally the place to form what we may collectively call “digital policies”. It makes perfect sense to have such a department within an R&D ministry, rather than within a ministry which only looked at these things from a market-regulation point of view and did it badly at that. I’m not saying that Golobič’s ministry would do an inherently better job, but I’m sure a lot of people would lose a lot of leverage in media and IT industry if the switch had happened.

But there you go. The empire struck back and Golobič was proven to be fallible. However, if Borut Pahor wants to keep on truckin’ as PM, he will probably be ill-advised to apply principles in case of Gregor Golobič, after he failed to do so in the case of Dimitrij Rupel and Draško Veselinović. Golobič can always leave the coalition and prompt a fall of Pahor’s government, for there’s always a nice and engaging job waiting for him in Ultra. He even registered as a holder of at least one patent.