Weeks ago I wrote about the fate of Igor Bavčar’s Istrabenz and hinted at Laško Brewery of Boško Šrot going south as well. Apparently this is starting to happen as Infond Holding, one of the companies in a chain of ownership which allows Boško Šrot to dominate Laško, has had its credit line extended to allow it to continue repaying the debt. The thing is that the bank which extended the credit line is none other than Nova Ljubljanska banka (NLB), whose new CEO Draško Veselinovič caused some people to go apeshit when he was appointed. 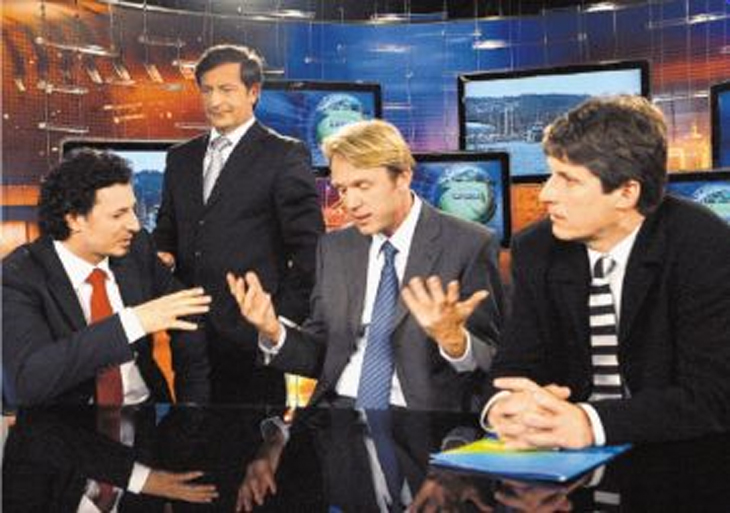 Ever since 17 April events followed at lightning speed. As Veselinovič approved extension of the credit line, both he and Boško Šrot of Laško found themselves at the receiving end of some particularly harsh criticism. At first Minister of Economy Matej Lahovnik floated the idea of Zares quitting the government as it is apparently incapable of stemming “tycoon loans”. This immediately opened fault-lines in several directions:

Various members of the government, including PM Pahor and Minister of interior Katarina Kresal took the position that what NLB did was bad, but that it was ultimately the bank’s call. This was, however, enough for Laško Brewery to claim that a witch-hunt aimed at bringing Delo and Večer dailies under government control.

The thinly veiled threat to quit the government irked PM Pahor just enough to send in his newly-minted second-in-command Patrick Vlačič (who in his spare time doubles as minister of transport) and have him say that if the coalition falls apart, early elections will be called (presumably with disastrous results for the quartet).

Zares’ swipe at NLB and its CEO Draško Veselinović rattled the cage at LDS as well, as party president Katarina Kresal snapped back at Gregor Golobič saying that the government musn’t direct the bank’s decisions and added that “it’s time for boys to stop fooling around and get back to work”.

Given the fact that she is one of the people with least political mileage in this government, her statement borders was audacious to say the least. But it apparently stoke a chord with Lahovnik, who said that it’s funny that calls to prevent government intervention come from “the lady who had her candidate for MP installed as CEO of Nova Ljubljanska banka”.

When things seemingly reached a boiling point, Ljubljana mayor Zoran Janković appeared from nowhere and called upon leaders of the coalition to get their act together.

Somewhere in between, however, Draško Veselinovič felt too much heat under his feet and offered his resignation to NLB’s supervisory board. Unconfirmed rumours have it that he is not good at handling stressful situations, but this was a relatively shrewd move. He didn’t resign, but did offer to, maintaining all along that he did nothing wrong. In effect, he was bluffing.

But – to put in poker terms – minister of economy Lahovnik “saw his resignation and raised him a Friday”, saying that he is considering resigning from the post himself, among other things (but not limited to) because NLB extended the credit line to Laško, which “shows a fundamental difference in values”. Lahovnik said that he will decide on his resignation by Friday (tomorrow) when NLB’s supervisory board was to debate Veselinovič’s fate. However, after Lahovnik made his announcement, NLB’s board canceled its Friday meeting with a new date to be announced.

And to top it all, Janez Janša didn’t want to be late for the party and said that the country is being held hostage by the coalition which is too self-involved to notice that the country is headed for a crisis and forecasted that this will lead to unemployment rising to 150,000 people (out of some 950,000-strong labour force), as well as increase of public debt from 28% to 50% of GDP.

Janša’s remarks of course drew direct fire from Zares top dog Gregor Golobič who said that the whole tycoon-saga started with Janša and that it was Janša’s thirst for media control which set this complicated chain of events in motion in 2005.

Karl Erjavec of DeSUS predictably says that the whole thing is not fair to pensioners.

WHAT TO MAKE OF IT?

Funny things is that most of the above statements (with possible exceptions of Janša and Erjavec) are more or less true.

The government is trying to influence both newspapers by undermining Laško. However, Laško did get its credit line extended after coalition parties said that this will not be happening, which smells badly of pre-election debts being repaid. Furthermore, Draško Veselinovič was appointed CEO of NLB as a reward for LDS not being too problematic during coalition negotiation. If coalition falls appart, early elections probably are the only solution, as PM Pahor would probably have a tough time selling a coalition with Janša to his MPs. Zares is slipping in polls and needs some good copy, stat. And yes, there is a general feeling that we’re looking at boys (and a girl) with toys rather then responsible individuals running the country.

On the other hand, the whole thing has little to do with pensioners, which puts Erjavec’s comments firmly in the AW category, whereas Janša’s statements are pure manipulation. Namely, as the crisis deepens the unemployment will rise to at least 150,000 people and as more and more cash will be needed to alleviate effects of the economic meltdown, we will be lucky if public debt will reach only 50% of GDP – which, by the way, will still be well within the Maastricht criteria.

IS THIS GOVERNMENT BIG ENOUGH FOR ALL OF THEM?

Yes. The only way for this coalition to crumble is if they take things too far. So far, everyone is leaving everyone else more than enough room to back down without losing face. What we are witnessing is in fact an intricate form or communication. Of course coalition leaders are parleying in private. But at the same time they are sending public signals to each other, where what is said matters just as much as who said it and how it was said.

So when Lahovnik talked about Zares leaving the government, it was actually Golobič talking to Pahor that he should be careful at how he will play the NLB/Laško thing. Pahor responded in kind, having Vlačič say that in this case early elections are possible, which meant that Pahor knows what is at stake and that Golobič shouldn’t get any funny ideas about different coalitions, because if they go down, they will go down together.

Katarina Kresal got the message as well and since she is the only member of the coalition who is fully replacable, she knew that she would be laughed at if she talked about leaving the coalition and instead through her “a little less conversation a little more action please” message said that she will not give up Veselinovič and NLB easily and that Golobič can go suck a lemon, thank you very much.

Golobič, however, did get what he wanted. The government will apparently take tougher stand against “tycoon-loans” and will take a more active role in managing the companies it owns. At the same time Golobič managed to put a daylight between Zares and Laško getting its credit line extended. And finally, with Janković (who is close, but not too close to Zares) appealing for calm, Golobič showed Pahor that there are other candidates for his job.

So, in the end, the whole thing turns out to be just a busy day at work. Unless of course, someone fumbles it. The coalition is not rock solid and all it takes is a short series of bad moves fuelled with pride and arrogance and the show could come to a premature end.

One thought on “A Form Of Communication”