Sunday will mark the 100th day of Borut Pahor‘s government. In case you didn’t know, the “tradition” of giving the government a 100 days to get its shit in order actually started with FDR and his New Deal and given the current economic situation the comparison is not entirely out of place. So what did the new government bring us us in their first hundred days? 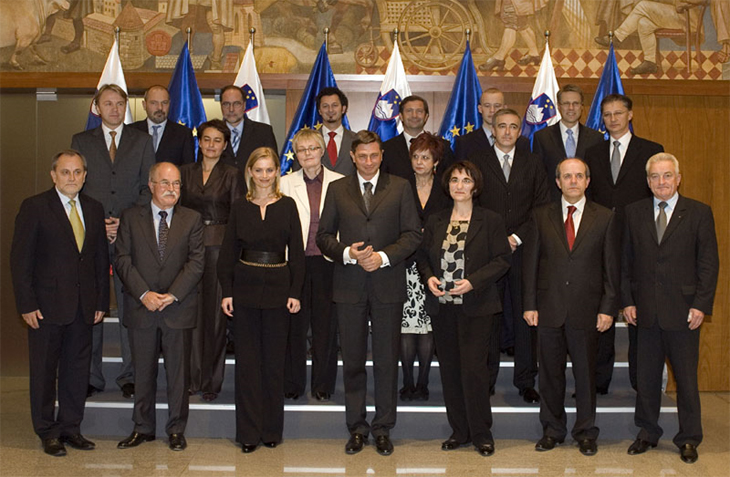 Definitely no FDR-like ramming of anti-crisis legislation through the parliament. Not that one would expect that in this day and age, but for all the talk of ingenious outside-of-the-box solutions, the government provided us with a conventional package of various economic stimuli combined with curbing of public spending. Not that this is bad per se, but if you look around and see that everyone else is doing exactly the same thing and getting nowhere, PM’s optimistic statements about Slovenia making it through the crisis relatively unscratched seem slightly out of place.

The problem of course is that Pahor’s government has little or no leverage over the causes of this crisis so it is largely restricted to soothing its consequences. It would be awfully nice if it could do some restructuring in the mean time, like shifting from work-intensive to high-tech and innovation industry. Indeed that was one of the premises on which this government was elected. Obviously such a quantum leap cannot be achieved in eleven weeks, especially if one takes into consideration the social aspects of the shift, but things will have to start happening in that department as well.

But even as things stand it seems that there was some initial pussyfooting about how to tackle the crisis as if the government was afraid that it would do too much instead of too little. Luckily the crisis will be deeper and longer than anyone initially thought, so there will be plenty of time for unconventional solutions (note the sarcasm).

Turning to pure politics, the first hundred days of Pahor’s government were pure rock and roll. So far his inauguration speech remains the high point of his tenure which should set off at least some alarm bells. Instead of a clean break with some of the most stale appendages of previous government including (but not limited to) Dimitrij Rupel. Borut Pahor may have adhered to the old adage of keeping your friends close and keeping your enemies closer, but the fallout over Rupel far exceeded the troubles the former foreign minister could have made if he were cut loose.

However, it is somewhat amazing that although – in terms of votes in the parliament – this is not the weakest coalition in history, the government continually seems to be on the brink of collapse. On one hand this has to do with the fact that former PM Janša run an extremely tight ship and although his competence as PM was questionable at best, the control he exercised kept up the appearance of at least mildly capable government. Until things started seriously falling apart. The current government, however, is made of different stuff.

Even though he is the nominal leader of the coalition, Borut Pahor is definitely not the authoritarian his predecessor was. He wants to come across as an assertive kind of guy, but his authority is constantly challenged. Which is alright, since this is a coalition government. The problem is that the PM refuses to acknowledge challenges from within the coalition yet at the same time readily seeks compromise with the opposition, sometimes even before an agreement has been reached within the coalition. Naturally, this does not go down well with the rest of The Quartet (save Karl Erjavec who seems to have learned his lesson) and is fueling rumours of Pahor and Janša looking to form a grand coalition.

However, the danger of this happening seems to have averted, for the time being at least, as the opposition filed an interpellation against interior minister Katarina Kresal for starting to settle the Erased issue. This obviously strengthened the coalition, and put a daylight between them and the opposition. It is not known how long this rekindled love will last, however.

BTW: The Erasure happened on this day, exactly seventeen years ago.

Here too the record is definitely not in Pahor’s favour. Much was written on this blog about Slovenia blocking Croatian EU bid and the referendum on Croatian NATO entry, so we won’t go over it again. Both seem to have gone haywire and are a classic example of foreing policy being only an extension of domestic policy. It should be noted, however, that there is one not-so-minor success which PM Pahor did achieve and which shows that Pahor knows his way around diplomatic parquet. He managed to persuade Italian PM Silvio Berlusconi to keep one million euros earmarked for Slovenian minority in Italy in the budget. This might seem an insignificant issue, but until now most Slovenian governments have been incapable of doing anything much for the minority. At the very least Pahor kept things from worsening – and did it in a five-minute chit-chat with Berlusconi in Brussels.

Since pengovsky made a big deal about Janša’s mistreatment of the media it is obvious that he’ll keep a close eye on how the new government goes about it. Minister of culture Majda Širca (media are in her porfolio) initially made some encouraging noises but things have been awfully quiet since. In the mean time, we’ve seen the continuation of some unacceptable pratices on the public television, such as the PM appearing alone in the studio without anyone from the opposition to counter him. Perhaps this will change soon, but if it doesn’t, hopes for RTVSLO becoming the new BBC are not good, even though Pahor publicly said that his government will work towards that goal.

Not that others are helping. Days ago the national radio ran a live talk-show where a journalist hosted two pundits on the Slovenia/Croatia issue. Apparently Ivo Vajgl. chairman of the foreign relations committee was listening and was so annoyed with what he thought was a completely wrong analysis by one of the pundits that he called in and corrected him. According to Vajgl he first called the editor of the show and asked for permission, but that does not make it any better.

Things like that should not happen. Ever. No matter what Vajgl’s motives were he would be well advised to quickly apologize, both publicly as well as personally to the people involved, starting with the journalist and the two pundits. Next, I think the editor should be fired for allowing the call to be put through, because it was he who failed to protect the integrity of the show.

I have much faith in Vajgl and I’m almost positive that this was a momentary lapse of judgement, but the transgression is a big one. An old Slovene adage says that the road to hell is paved with good intentions. We can’t have politicians calling in or showing up in studios all over the country uninvited and telling everyone else what’s right and what’s wrong. This is one of the reasons Janša’s lot were voted out of office.

TO SUM IT UP

The first hundred days of Pahor’s government have been intensive. Economic crisis, blocking Croatian EU bid, being set up with the referendum on Croatian NATO entry and an interpellaton of a minister would be a mouthful for any governemnt. But – as I’ve said time and again – the Quartet was elected because it promised to do the job better than the other guys. Hic Rhodos, hic salta.

With this in mind Pahor’s government can get a passing grade for its first hundred days in power, but that’s it. Especially since there are problems which the government and the PM are creating for themselves, like the Rupel thing or coalition parties trying to outfox each other. And then there’s Pahor’s incessant bi-partisanship which somethimes still makes one wonder just who the hell won the elections.