The government of Borut Pahor (who, BTW, has already earned the nickname Borat) found itself in a race against time as the ratification of Croatian NATO membership was sabotaged by Podobnik & Co. yesterday. 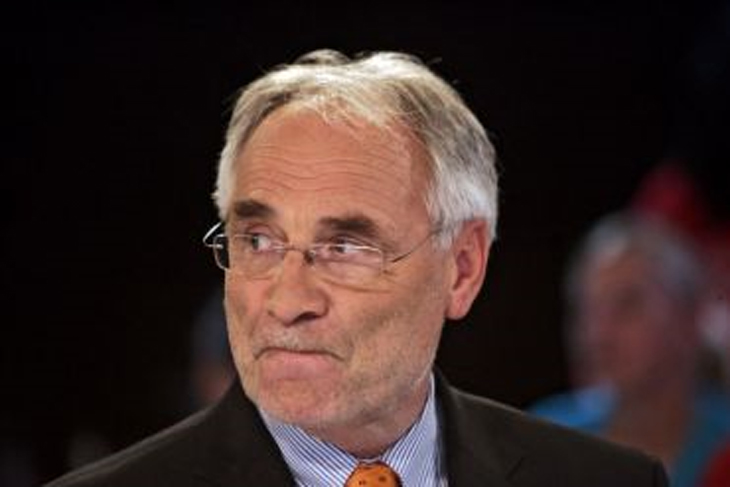 Ivo Vajgl, the man who has to come up with a plan (source)

Since 2500 signatures appear to have been filed correctly, president of the parliament Pavle Gantar must declare a 35-day period for the proponents of the referendum to collect 40.000 signatures which would require the parliament to declare a referendum on the issue. The thing is that almost no one in top echelons of Slovene politics wants a referendum, save Zmago Jelinčič of SNS, but the extent to which he counts as top echelon is debatable.

Croatia and Albania (where the Prez is visiting these days, incidentally) were supposed to be welcomed to NATO on 3 April, requiring member states to deposit ratification documents with the US government no later than 23 March. Which means that the signature collecting period would have to start today, which is legally impossible. It can start tomorrow at the earliest. Thus, we are faced with three possible scenarios:

1. There is some sort of agreement reached today and Podobnik backs down

This is what Pahor’s government is aiming. According to Delo daily, the coalition left it to Ivo Vajgl, the president of the foreign relations committee to broker a deal. The thing is that Podobnik demands that parliament passes a resolution citing three specifing border areas where Slovenia will not compromise on. He doesn’t seem to understand that this implicity means that Slovenia is willing to compromise on everything else. A similarly disastrous mistake was made by Dimitrij Rupel in early 1990s when he said, referring to Italy, that Slovenia is willing to negotiate on anyting but borders . And Italy said “fine, let’s re-negotiate Osimo treaty“.

Additionally, even if the parliament gives in to Podobnik’s demands, there’s no guarantee he’ll back down. He is not really what one might call a reliable party.

If the first scenario fails, this one isn’t very likely, because you will always find 40k morons in this country who think that they have to take it out on Croatia no matter what. Additionally, is signature collecting starts, things will get ugly, with PM Pahor actively discouraging people from signing, whereas the opposition will probably be split, with SDS abstaining, not willing to help Pahor, but unable do support the referendum since they supported the ratification. The nationalistic-bordering-on-neo-Nazi element will be excited to the point of continuous multiple orgasm and it will be very hard to keep the heads cool on both sides of the border.

But in case Podobnik does fail and does not collect 40k signatures until 24 March, he sill has a week to present the results, which means that Slovenia will be able to send ratification papers to Washington no sooner than 2 April. In time for the NATO Summit, but whether this could affect the accession timetable is unknown at this time.

3. Podobnik succeeds and the referendum is actually held

Then the result is anybody’s guess. At the moment public opinion polls show that most people support Croatian NATO entry, but the problem with referendums in Slovenia is that the turnout is frighteningly low. Usually in the low thirties percent-wise, but – as you will no doubt remember – the referendum on regions saw only 11% turnout.

With such small turnout numbers it is impossible to say what would happen if the referendum is actually held. Furthermore, even with the shortest of time-tables the referendum cannot be held sooner than the first half of May, which basically puts Croatian and Albanian NATO entry off for at least six months.

The negative effects of a referendum would be numerous, but more on that tomorrow.

3 thoughts on “Will Vajgl Beat The Clock?”