It’s been a while since pengovsky posted on public opinion polls and we’ve had two od those in the last 14 days, one by Delo (on 3 August) and one by RTV Slovenija on 16 August. Please note that I consider RTV SLO and it’s pollster Interstat a problematic duo, but I include their polls nevertheless – for the moment I give them the benefit of the doubt.

The story so far: 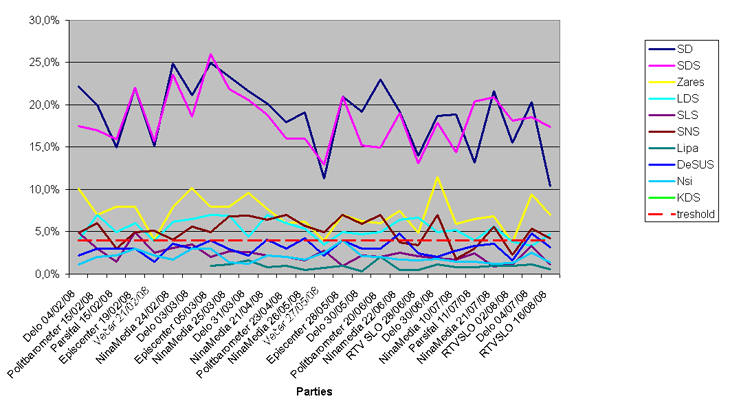 You will notice Social Democrats’ ratings going up and down like a cork in the water. This is obviously a result of RTVSLO moving up the pace of its polls, and since leaders of the left bloc Borut Pahor, Gregor Golobič and Katarina Kresal (of Social Democrats, Zares and Liberal Democrats respectively) went on the record that a coalition with PM Janša’s SDS is out of the question, a whole new dynamic in pre-election rhetoric emerged.

It seems to have dawned on SDS what pengovsky has been saying for quite some time: that although SDS and SD are neck-and-neck in the polls the three left wing parties (SD, Zares and LDS) enjoy a small-but-comfortable lead over the three right wing parties (SDS, SLS, NSi), even if you take RTVSLO’s polls into account: 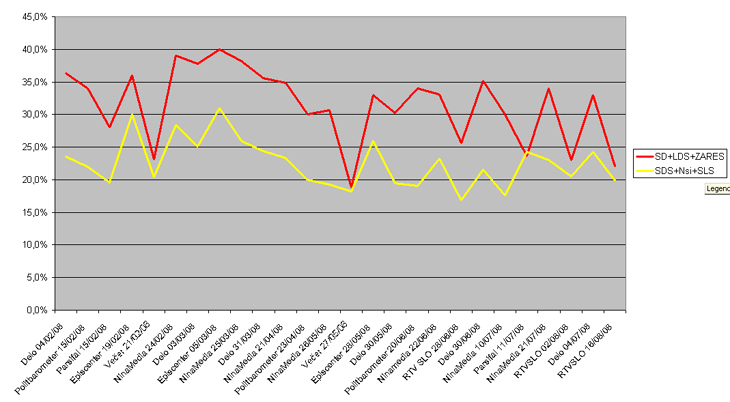 Specifically, Janez Janša is starting to make nervous noises about the possibility of his party taking the top spot and not getting the mandate for forming the government. To coutner that, said Janša, SDS must win big and not by just the slightest of margins. As we know this might prove a tad difficult, as SDS seems to have canibalised all the votes it could off of SLS and NSi, while making little progress in enlarging the voting base of the right wing option as a whole.

So Janša and his party are afraid that President Danilo Türk (himself supported by SD, Zares and later on by LDS in the presidential elections) might give the mandate to form the government to the party which will clearly be capable of forming a ruling coalition and not (as per convention) to the relative winner of the elections.

The trick is, that – given the projected distribution of votes – whoever gets the mandate will very likely form a ruling coalition one way or another. So it goes without saying that the thought of circumventing this unwritten rule of forming the governement has crossed many minds on the left side od the political spectrum, and Janša apparently got the wind of it.

Personally, however, I think that ignoring convention would be a very bad idea and I hope that President Türk will not succumb to the lure of cutting a shortcut to Janša’s removal from power. Namely, if SDS were to come out on top but the mandate would go to SD, SDS would scream treason, defamation of voters’ decision and what-have-you. And they would have a point. Furthermore, if the left wing parties can’t get a clear mandate to run the country, than perhaprs they’re better off not doing it, since theirs would be a very weak mandate, with SDS, SLS and NSi constantly questioning its legitimacy. And so on, and so on…

So if SDS does come on top eventually (as many people believe it will), then it is only right that PM Janša gets another shot at forming the government. The task just might prove to be a bit more difficult than it sounds and even if he suceeds, he would be presiding over a politicaly very diverse government, in constant danger of falling appart.

Pengovsky’s projection: Regardless of the actual perctentage, SD and SDS will continue to battle it out until the last day of election campaing, knowing very well that whoever gets the top spot will most likely form the government. I really think that any sort of shennanigans with giving the mandate to the party which would come in second would be an extremely bad idea.

Data is available as an MS Excel file.

Election 2008 badge is updated to reflect the last available poll (RTV SLO), although I stress again that its results are problematic at best.

5 thoughts on “The Top Spot Should Decide the Coalition”