Monday’s special session of the parliament was an excercise in “ore exploration and wasting time” to use a phrase popularised by the Group TNT. Hours upon hours of the coalition praising the government on its swift and merciless showdown with tycoons (nevermind the fact that no charges have yet been filed) and the opposition saying that it’s all a load of bollocks and that the other side only wants cheap PR on state television (nevermind the fact that the opposition made good use of airtime as well) 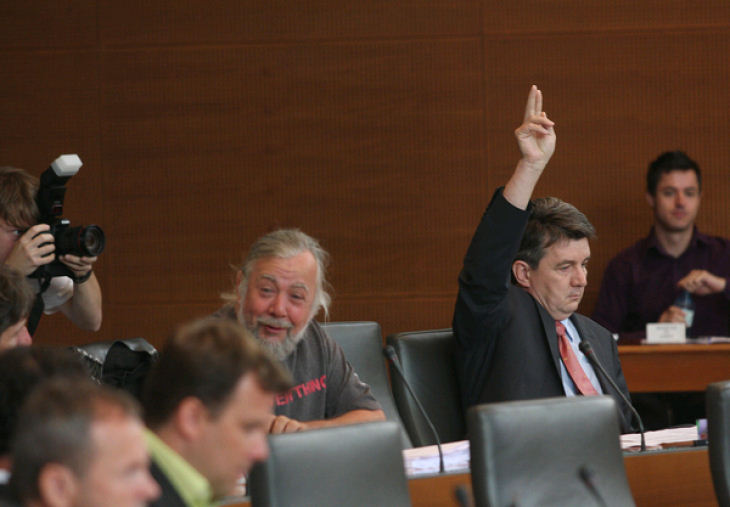 But what was it all about? Technically, Monday’s session was a direct result of a resolution passed a month ago, where the parliament called upon the government to do something about these pesky tycoons and do it quick. In case you forgot, a month ago the MPs were at each others’ throats for most of the day, and then, ten minutes before closing time, when the President of the Parliament called for last orders, he and the rest of the coalition were given some by PM Janša who marched into the Parliament after the opposition spent the debate time alloted and – without the fear of being rebuked – told who the bad guys were really.

This time around it was the government which requested the session, even though the parliament is officially on vacation. But that didn’t stop the PM to skip the session completely. He left the job of explaining how the sudden increase in activity of Competition Protection Office and Securities Market Agency is absolutely not connected to the fact that elections are 53… no, 52 days away to Minister of Economy Andrej Bizjak, his head of MPs Jože Tanko and Branko “Gizmo” Grims, his chief attack-dog and a Goebbels-wannabe

Although the timing of the session mimics a move made by Janša four years ago, when he lambasted the government of Tone Rop, there are not-so-subtle differences between then and now. Four years ago then leader of the opposition Janez Janša spent hours deconstructing the LDS-led government, accusing it of being too soft on corruction, crime and cronyism (the three Cs). Add to that the Erased, a wave of anti-Roma sentiments withing the more “patriotic” part of of the population and an extreme case of ruler’s fatigue in LDS and you can see why Janša won elections in ’04 and what platform he won then on.This year, however, Janez Janša is a prime minister of his own government but still blames his political opponents (who are now in the opposition) for the situation we are facing today.

So on one hand the PM is trying to pull the same stunt again, but on the other hand he needed this session badly, because – despite all the hubbub – the regulators still cannot file a single indictment. So the political aim of Monday’s session was to create a feeling that the “war against tycoons” is going well and that the final victory is at hand, so Boško Šrot my just as well turn himself in. Not that he has any plans of doing that, because this time around he wasn’t the primary target. This prestigious title was reserved for leader of Social Democrats Borut Pahor, whom the coalition MPs were trying to present as being merely a pupet for Boško Šrot and his media and political exploits.

So the goal of Monday’s session was not really about tycoons, but rather about how to frame the opposition for everything this government didn’t do in the past four years. It was a real waste of time. One might just as well start prospecting for ore.

P.S.: As of yesterday we also have a new political party in Slovenia: the Christian Democratic Party. More on that in the coming days